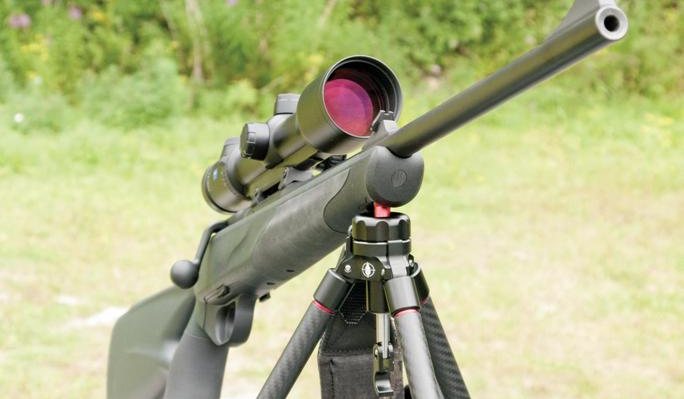 You know it’s really nice when a company actually takes notice of my comments on an item and better still reacts to them in a positive manner. This doesn’t always happen and I have fallen out with a few importers in the past due to aspects of designs that have come to light under proper testing; get over it guys, facts are facts and criticism is constructive!

Wouldn’t It Be Better If?

Last month (September issue) I looked at Spartan Precision’s Kapita shooting tripod. You know them, they came out with their radical, magnetically attached Javelin bipod (now into Mk II mode) and the Kapita is based around that system to a degree. It’s clever, as it’s the most stable shooting tripod I have ever used, as well as being light and easy to carry; suffice to say I never liked shooting off any form of sticks up until now. Plus you can turn it into twin and even single leg mode, again with the improved stability.

The Kapita’s head shows the magnetic spigot with an integral, ball base with a rotary clutch ring on the outside that allows you to adjust the tension, along with three, hinged sockets that the full-length, 3-section, carbon fibre legs screw into. It was then I got my first ‘wouldn’t it be better’ idea and rang Spartan’s General Manager Simon Wilkinson. So what about a set of short legs that could turn the Kapita into a compact bench tripod for spotting scopes, binos and also allow the rifle to plug into it as before, so that it could be shot off the bonnet of a truck, prone or a shooting table?

Smugly, I made my suggestion and Simon told me they were already on it; damn! He sent me three shorter 9 – 14.75” legs for testing, which at minimum extension gave a height of 10.5” (to base of spigot). This proved a tad high and my thinking was shorter would be better; plus, as they are adjustable you can still compensate for most requirements, and as if by magic a set of 7.25 - 9” adjustables came next. These dropped the minimum height to 9”, which proved better for spotting scopes, binos and rifle shooting off the bench or bonnet. They give a solid support with the Kapita’s ability to dial out movement on the spigot section as you require. Personally I’d like the legs even shorter; say 6”!

If you are not aware, when Spartan designed the Javelin bipod they also included what they call a rifle adaptor plate (RAP). Originally this consisted of an external, screw-on socket, which worked but I never really liked it. They quickly came up with what they call the gunsmith adaptor, which is a wider socket that is flush-fitted into the underside of the forend and bonded in position. A much better idea as it’s stronger and also does not add height as the original RAP did.

Capitalising on this is their Picatinny adaptor, which is a Picatinny clamp fitment with an integral RAP socket for rifles with this fitting. As can be seen from the pictures, I have put it on an AR15, so allowing an interface with the Kapita tripods, be they bench or field height. Obviously the gunsmith adaptor needs fitting properly by a competent person, unless of course you have a Blaser R8! If so, there’s their Blaser Carbon bipod, a purpose-designed Javelin-type and Blaser also includes a replacement forend cap for this rifle that incorporates an integral RAP socket that just replaces the original R8 nose cap.

Rob Geering (Spartan MD) told me that the spigot for the R8 Carbon Bipod is slightly longer due to the depth of the RAP end cap. So if you want to use a Kapita with this rifle they also make a suitable, R8-depth ball & spigot, sweet!

There also a camera adaptor unit too that can be used on either the field or bench Kapita for mounting a spotting scope or binos with an adaptor. It’s a simple design and needs maybe a tad more development but it works. The first example I saw consisted of a thin alloy cup with a steel camera tripod adaptor thread protruding out of the top. This just winds into the optic and sits on the spigot, the only problem is it swings all too easily if the head is not exactly level. The Mk II was identical apart from a threaded hole in the side, which a small, steel thumbscrew went into. This engaged with a tiny slot on the side of the spigot to stop any rotation, unless it was put in via the clutch ring by the user.

Better, but the slim alloy main tube had no means of tightening it up to the optic, I reckon something larger with flats on it so you can wind it tight would be better. Also, thicker walls would stop the steel screw cutting the alloy; maybe even a helicoil thread insert and a larger thumb screw head for easer tightening.

A final prototype (so far…) is the magnetic attachment plate. This is a metal plate with a magnetic base and a simple screw-on top. To this screws the special socket, originally a developed for fitting to high seat rails. All you do is slap it on your bonnet, drop in a short tripod leg with magnetic spigot then slot your rifle on top. It needs work as a suction cup would be better for Land Rover owners like me with aluminium bonnets, but what it really shows are the possibilities and adaptability of the original magnetic attachment system as envisaged by Spartan. There are doubtless more developments and products to come, there’s also a bipod system unique to Sauer’s 404 rifle.. So as they say - watch this space, as doubtless as the kit becomes available we’ll get it to test.