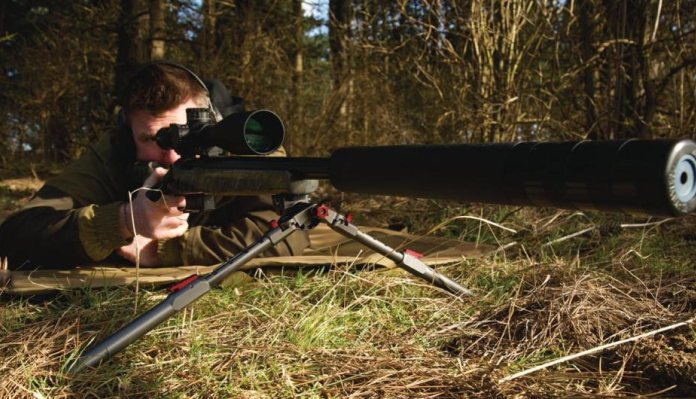 I suppose, technically, ‘ELR’ can stand for whatever you like, a name is just that, and although assumed to stand for ‘Extreme Long Range’, that doesn’t necessarily mean heavy .375, .40 and .50 calibre rifles shot beyond the mile. It can quite easily also apply to anyone wanting a versatile, wide stance bipod support for any precision rifle usage.

The latest Tier-One unit is fully machined from 7075 series aluminium and stainless steel. The goal is to beat imported units’ tolerances while being lighter and less expensive. It’s available with a quick-release fitting for Picatinny or Arca Swiss rails and weighs just 588-grams (20.7oz).

Each telescopic leg extends (not including the foot) from 210mm (8.25”) to 300mm (11.8”) in five stages, with a sprung locking lever between each 23mm step. The legs can be pulled straight out for rapid deployment, without operating the latch. Alternatively, if discretion is key, then squeezing the latch will enable silent extension.

I got hold of the Picatinny-fit prototype bipod straight after the British Shooting Show, where it had been taken for likely buyer’s feedback - very little was suggested! The unit offers pan/tilt to enable target tracking and uneven cross slope levelling. Feedback suggested the red underside flag control (used to lock the pan function) be made a little larger, and because it is manufactured in the UK, by the time I collected the unit two days after the show, the advanced characteristics had already been programmed for the first machine run!

Targets to your front

In use, I found the bipod exactly as suggested. There was very little noise or sloppiness because all the joints and pivot junctions have been truly manufactured to significantly smaller tolerances. The QR Picatinny clamp is adjustable, so locks securely onto the underside forend rail without exacerbating any possible slack. Each leg locks decisively in position, with no likelihood of missing the sprung detents that are all visually highlighted in anodised red.

When shooting from the prone position, you can load and unload the bipod as desired. There are no clicks or jolts as it takes up the slack, just the subtle acceptance of pressure loading the legs and joints right into the ground for stability and recoil control. Rubber feet are supplied with optional claw feet available, and there is a small sprung pin at the base of each leg. You can use the tip of a bullet or knifepoint to press it in and rotate out the feet. On the soft woodland ground, the tricorn claws held position solidly.

Depending on the actual amount of elevation required, the multipositional legs will offer huge variation to suit your surface and inclination. Very low prone with wide legs was of course the most stable configuration but even in a more upright position, the legs didn’t flex unnervingly and the joints, with additional tensioners if desired, still refused to rattle.

Although not fitted with a long handle, there is a cant tension adjuster close to the hinge, under the forend. This can be adjusted to match the overall weight of your rifle/balance point. The pivot axis is close to the gun’s underside, so you aren’t left with a high centre of gravity either.

Whether this is a competition bipod or not, it’s beautifully made with the finest materials. It does everything promised and is well worth the price for precision rifle users. The grey/ titanium hard anodising didn’t pick up a single mark from three days of handling at BSS and notably, the leg extension detents, which had been demonstrated hundreds of times at the show, showed no sign of wear thanks to the hard 7000 series aluminium, which although somewhat ‘over the top’, assures its long term worth.