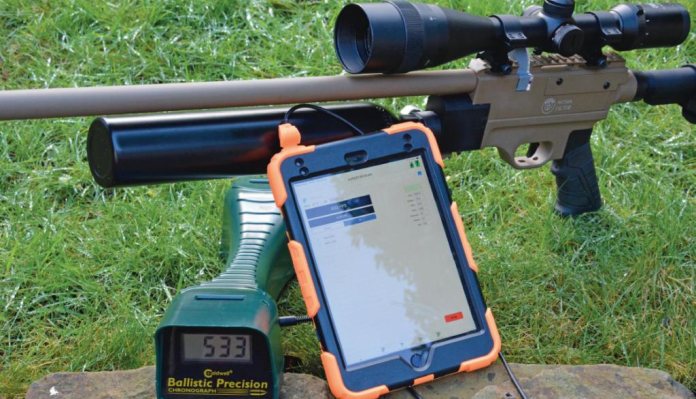 Caldwell’s Ballistic Precision Chronograph ‘Premium Kit’ brings together all the items you need to accurately chronograph any projectile. A strong dual zipped Cordura travel case with a shoulder strap is partitioned inside to hold the chrono, tripod and two sets of sunscreens. One to shade the sensors from direct sunlight and a second set, powered by 4 x AA batteries, which Illuminate the screens for use indoors and are unaffected by flickering lighting.

The Caldwell’s central body shows optical sensors at each end to detect the passing projectile’s shadow, with readings from 5 to 9999 feet-per-second (FPS) and promised accuracy of +/-0.25%. An underside compartment accepts the 9-volt battery as well as a spare. The threeposition, left side switch turns the unit on in either metres or FPS and there is a cable socket on the opposing side.

The sensors are deeply recessed to minimise airborne debris from the muzzle blast and the frontal LCD screen is easily read from behind the rifle. The extra-wide sunscreens are forgiving and I found the unit easy to align underneath the line of bullet flight, 2m from the muzzle without missing readings.

I have used the chrono on overcast days with .177 air rifles and pistols without the screens needed, but it’s easy to add them if bright sunlight disturbs your readings. When needed, the steel rods and screens create an arch 33cm high x 36cm wide, so using them regardless makes it slightly easier to align the unit.

Remember to check your bore line not just the scope’s view, the Caldwell isn’t bulletproof! The unit can be used from the ground or can be attached to the supplied tripod via a ¼” UNC thread.

The illuminated sky screens are great for indoor use with airguns or arrows, where flickering mains electric lights disturb optical units like this. The I.R. light they emit is invisible but a red LED at each end of the screens indicates that the power is on.

Smartphone or tablet connectivity allows velocity readouts right next to your rifle with the ability to name certain shot strings and save all the data. This is particularly helpful when testing assorted ammunition or handloads, without any need to take written notes at the firing point.

Readouts for each string give maximum and minimum velocity, extreme spread, standard deviation and muzzle energy. This and all attached data (including a photograph of your group on the target and its precise measurements) can all be added after shooting has finished and everything is saved on your device.

Its ease of use in ‘naked’setup is very accessible for quick readings and the smartphone options turn a good Chrono into a great piece of kit for more detailed range sessions! It’s a shame it isn’t wi-fi, but on the other hand, it’s always physically connected and doesn’t frustrate you with constant ‘connection failed’ alerts that could ruin a serious test!