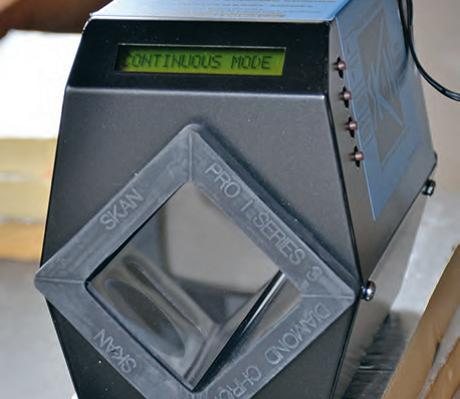 Many airgun enthusiasts, myself included, derive another level of enjoyment from pushing performance to the limits, and that means keeping on top of our gun’s output and being able to analyse results along the way. Fall into this latter camp and the chances are that you will benefit, if you aren’t already, from ownership of a chronograph. Chronos are precision electronic instruments that allow us to check the velocity and kinetic energy of an airgun, and that has several uses.

Of course, being able to check the consistency of a favourite gun brings confidence and the chrono allows us to compare the performance of different pellet brands and weights for compatibility and overall suitability. Aside from the technical analysis aspect, there is also the small matter of staying legal, and here, having our own testing machine to periodically check that a particular gun isn’t getting too close to the legal power limit, is a Godsend. My advice then at this juncture is, if you don’t already own a chronograph, make a point of getting one.

On test here is the Skan Pro 1 Series 3 Diamond Chronograph and the fact that it’s also labelled the 40th Anniversary Model just about says it all. I remember when I was just discovering airguns, back in 1979, and Skan were already on the scene. One glance at this manufacturer’s history shows they actually began production in 1977.

Fast forward to the present day and Skan can boast that their products are in regular use with police forces and airgun manufacturers. So yes, I think we can safely say this British manufacturer is well respected and esteemed in their specialized field. That’s all very reassuring of course, and with Skan quite rightly making much of the fact that their chronos are the only models available that self check themselves, resulting in 99.5% accuracy, not to mention their 2-year warranty, we can certainly buy with confidence.

Let there be light

So what’s all the fuss about? As someone who tests airguns full time for a living, I’ve obviously had chronos in operation, of one sort or another, for many years. I’m a big fan of the Combro and I also use a Shooting Chrony model, and whilst both have served me well, the way they rely on daylight being just so is both infuriating and irritating in equal measure. Sun too bright or too dull - either will stop play, and this is where the Skan, designed with infrared sensors, bypasses such drawbacks. All importantly, it requires no special lighting and is even immune to fluorescent lighting.

Designed primarily for indoor use, the Pro 1 Series 3 is a slick (registered) design that incorporates a diamond-shaped shoot tube with special wide diagonal beams, with the end result being that it’s fairly easy to achieve alignment.

Skan has designed this chrono to either run from battery power or mains. It comes with a transformer style plug and this connects to the two spring connectors on the rear of the housing. I’d recommend taping up the wire at this end, just so it doesn’t accidentally hang down near the shoot tube. Opt for battery power, and Skan recommends 2x 9v batteries connected in series. It’s easy to rig up but it should be noted that neither batteries nor the wire connectors needed are supplied. Personally, I’m probably happy to stick with mains, but it’s great to have the option.

Likewise, there’s a computer version available at extra cost, complete with a built-in interface and USB cable, allowing for more shots held, standard deviation, full data logging and retrieval of previous data. Either route requires some thought initially on the physical set-up for testing, as the main consideration at the start is that some form of support is needed to hold the gun on the level, to ensure the shots fire safely around the centre of the tube. I’ve adopted a firm cushion to maintain up and down level, then I correct left and right by eye. You may find making some form of v-block support from padded wood works. Either way, it pays to plan accordingly. Tough rubber surrounds the opening and having spoken to the manufacturers, I am assured that the polycarbonate material used for the shot tube should deflect a badly placed shot in most circumstances.

As for a backstop, I had the unit in front of a padded pellet catcher, and steel plates behind that, so belt and braces. Safety glasses complete the prep stage.

Once plugged in, the unit’s LCD display shows the warning about keeping the gun’s muzzle 10” away. Now, press the ‘Yes’ option from the four side buttons. The display now shows the self-check figure. Say ‘Yes’ to this. ‘Continuous Mode’ now shows, which is the standard mode, so if ‘Yes’ is pressed here, the system then shows pellet weight. Use the arrows to set this to the correct weight in grains (up to 49.9-grains), then OK the weight by pressing ‘Yes’ once more, and you’re ready to fire. The clock is started as the pellet passes the first sensor and stopped as it passes the second. After each shot, the velocity shows in fps, alongside the energy in ft/lbs.

Fancy making use of the 50 shot memory? Then just say ‘No’at the ‘Continuous Mode’ point and the display moves to the storage function, divided into A, B, C, D or E. Arrows navigate between memories and all data is retained after a power off. Having now familiarized myself with the function of the Skan, I can certainly conclude it’s a classy bit of kit, plus it’s pretty easy to use.

Just having a chronograph around to fully check a gun’s performance is immensely satisfying, and for all the reasons outlined previously, it makes a lot of sense. Skan’s name and hardwon reputation in the industry are now beyond doubt, and as such, this 40th Anniversary Model represents something of an investment. In short, yes, I’m genuinely impressed with this Skan - so much so that I’ve put my money where my mouth is and finally done what I should have done years ago, and set up a permanent indoor testing facility, with the Pro1 Series 3 at its heart.