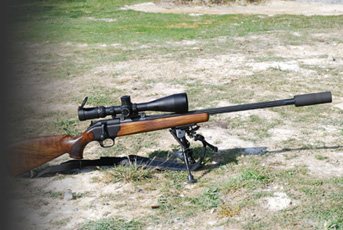 I have used Ase Utra moderators for some time now and have a muzzle-mounted Compact on my 223 Rem and a North Star reflex on my 6.5 Grendel, and have no complaints. However, my on-going and long term test of the Blaser R93 in 222 and 25-06 Remington required cans for those two barrels. I decided on Ase Utra and spoke to Pete Jackson (Jackson Rifles) about it.
He suggested a North Star for the 25-06 and asked if I would like to try the new Jet-Z CQBS for the 222? The reason being the CQBS is specifically designed for 223 Remington to offer the smallest practical build possible. Given the 222 tube is a heavy, 24”, match/fluted-style then any weight and length saving was worth consideration.

The CQBS weighs 14.5oz (420-grams), which is reasonably light and it comes in well below the 500-gram benchmark, which is good enough. However its heavy gauge, all-steel construction guarantees a long and easy life. OK it’s carbon steel and not stainless, but my rule of thumb is to spray it up with oil for zeroing and after each hunt give it another quick squirt to keep the rust worms at bay.
Where it really scores is in size with an overall length of 4.75” with an outboard measurement of just 4”, diameter is 1.5”. Suffice to say it suits the R93 Match tube very well and already I’m thinking about getting one to replace the Compact. As an example of scale the North Star weighs 1lb 7oz and is larger at 7.75 x 1.75”, but you must bear in mind the CQBS is a highly specific build aimed at a maximum calibre of 223 Rem. For that round and the 222 Rem it does an amazing job, figures show an output of 26 to 29 dB, depending on barrel length. But to my Mk 1 ear it sounded fine…

Being a solid design it’s hard to see what’s going on inside; from what I could though, it shows a small, forward expansion chamber then just three baffles and a cupped end section. Which deals very well with loads using up to 26-grains of reasonably fast burning powders. In fact it does it better than some other and larger 22-spec, centrefire moddies I have used.
There’s not a lot more to say; it works very well in its calibre range and adds little in terms of handling and not a lot more in weight penalties. If an ultra-compact 223 Rem can is your requirement then look no further!

For: Small, well built and very efficient
Against: A very calibre-specific design
Verdict: If a compact and effective maximum 223 can is your need the CQBS will fill it