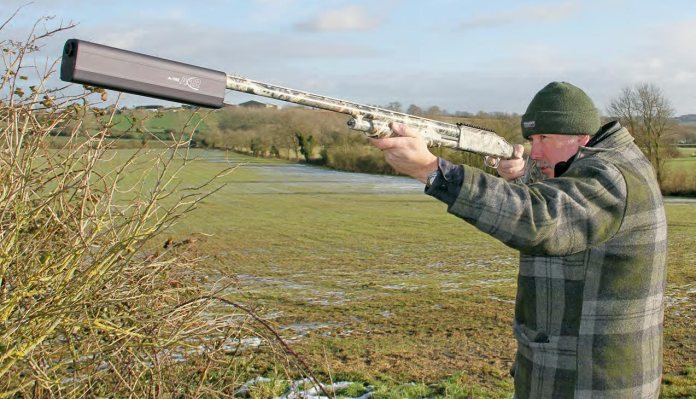 Anything sound moderator related and my ears prick up instantly! I remember the days when only a Vaime sound moderator was your choice for your rifle and shotgun mods were hardly heard of, except the Galway silencers. Today, rifle sound moderators have become second nature when choosing a rifle and with shotguns you have the excellent original Hush power silenced shotguns from the Saddlery and Gunroom and the Stealth from York Guns. These are both fixed units that use a ported barrel system, although the Saddlery and Gun room do offer muzzle mounted options too.

Enter the new A-Tec A12 sound moderator from the well-known Norwegian firm and you have a shotgun moderator that will revolutionise silenced shotgun use. At present, it is designed for 12-gauge use only and recommended for semi-auto and pump actions.

What is really interesting about the A12 is the size and weight of the unit and the way it attaches to the shotgun. It’s all aluminium and light at 560-grams and is designed as a drop-down design below the sight line and barrel. It also attaches by substituting the existing choke in your gun, six choices, with an extended choke that the A-12 attaches to. You can therefore attach or detach at your leisure and the unit is strippable too for cleaning.

It’s a weird looking critter, but its design makes a lot of sense. Most shotgun mods are fitted concentric to the bore and so block the upper sight line. The A-Tec A12 sits below the front bead, so you aim as usual.

It is basically a large aluminium can. It measures 300mm long by 70mm deep and 56mm wide but weighs only 560g; so, despite looking like a pencil case on the end of the barrel, you hardly notice it.

The unit is strippable via two sets of 3mm hex bolts at either end of the mod. These secure two end plates that sandwich the inner baffle arrangements and hold the vented bore portion in place. Each are also sealed via a rubber O-ring at the ends, so exhaust cases do not escape.

With these ends removed, you have two main parts. The tubular portion that the shot column passes down that is 310mm long. This is vented by nine rows of 11 holes that bleed off the expanding gasses behind the shot column, down into the heart of the A12.

This is basically an inner, skeletonised shell of the outer dimensions. It has an upper hole at both end that the bore tube threads through and then is vented along all its length to reduce weight and has two large vertical plates that act as large baffles to retard the progression of the hot gases and thus cool them and reduce the noise at the muzzle end.

It is finished in a satin black anodised finish that is quite easily marked and has a mock raised grooved rib on top to keep the eye flowing to the target.

To attach, you replace your existing choke with the A12 adaptor choke. These are available in Mobil choke that will fit a Beretta, Benelli or Franchi, Crio Plus for Benelli only, Invector for older Winchesters, Mossberg (on test) and Weatherbys, Invector Plus for newer Browning and Winchester, Optima HP for Beretta and Remington for 870 and 1100 models.
The A12 is supplied with a special choke key that fits the replacement choke. But first you need to fit this choke to the A12 body. A C-spanner is supplied and this is used to tighten a collar to the front end of the adaptor choke and tighten it to the A12 rear end plate.

Now remove the old choke and the fit the A12 plus adaptor choke into the barrel and tighten fully home. At this point, you can make fine adjustments, so that the A12 sits perfectly vertically, by loosening the collar and then re-tightening. It’s a bit fiddly, but you get used to it. Once in place, it is secure.

You are restricted to wadded 12-gauge cartridges only with a maximum 42-gram shot weight and US No. 2 size. Strictly no slugs or buckshot, which is a shame! I had to clarify the ‘wadded’ ammunition, as to plastic wads that will protect the shot column, or were fibre wads behind the shot column OK too. This is because the vented tubular barrel portion of the A12 is very tight and grooved, so I was cautious not to shoot the wrong ammo type. Peter Jackson confirmed that plastic or fibre wads were fine, so that is what I shot.

Also, the replacement choke adaptor is a half choke and also proofed for steel shot, so a good compromise between open cylinder and full choke that most silenced shotguns are. I used a Mossberg Duck Commander 535 pump, so Invector choke.

First up, were the standard Eley DTL Gold plastic wadded cartridges at supersonic velocity. These had a plastic wad and 28-grams of No. 7.5 shot and at 30-yards on the pattern board I had a total of 197 pellet strikes. That’s a bit down from normal, as the pattern had a high bias. It was also tighter than you would expect from a ½ choke. I had 149 outer pellets strikes within 30-inches and 48 No. 7.5 pellets in 15-inches.

Without the A12 fitted, the pattern centralised and had a total of 232 pellets. Noise wise I was impressed, as the report was a very muted, almost a stifled cough from a bike’s exhaust as it back fires. There was no carry-on noise down range, so very quick and dead, so neighbours would hardly hear it.

Next were two subsonic loads. The first was the Hull Subsonic VLR round. This is a 65mm case with fibre wad and again 28-grams of No. 7.5 shot.

As with the plastic wadded DTL load. no problems going through the A12, so all safe to shoot.

I had a total of 291 No. 7.5 pellet strikes at 30-yards, again a slight high bias but better. I had 208 outer pellet hits and 83 inner strikes, a great dense even patterned load and a bit more like a ½ choke pattern too.

Best of all was the unbelievable muzzle report or lack of it! My son Jake was photographing and we both thought there was a misfire. Pump the Mossberg again and hiss, same report. It was amazing, about 2-inch muzzle rise i.e. recoil, so zero in reality, so you can spot your shot. The noise can only be described as a ‘qweek’; totally hollow, no carry-on noise and in fact it’s more of an echo coming from the A12.

Finally, the Eley subsonic or Hushpower load. This was slightly different with a short ‘throng’, resonating report and a little more recoil, despite shooting the same No. 7.5 28-gram loads and fibre wad.

I had again a high bias to the shot pattern but a few more lower hits too. A total of 247 pellet strikes was good with 188 outer 30-inch hits and 59 inner 15-inch pellet strikes.

Performance is quoted at an overall performance of 19DB reduction with std velocity supersonic loads, which I would say was correct. With the subsonic loads, it is staggeringly quiet and, well, I am lost for words to be honest! That’s with a pump action and so next time I would like to try a semi, to see performance also, I guess okay cycling with standard loads and single shots for subs, but I will report back when tested.

Light weight, reasonable price, does not interfere with your sight line, strippable to clean, easy fitting/removal and best of all, amazing noise reduction! I really like this A12, I was total sceptical and a bit worried about fibre wads, but no problems at all and despite the high bias to the shot pattern, I can live with it. For noise sensitive areas its ideal and although it looks ungainly, it actually does not impede the swing at all. With standard ammo, it takes that harsh boom and followon echo away and with subs it is just unbelievably good. Great mod and well worth the money, I am after a 24-inch Invector Plus barrel now for more tests in a semi-auto!

Since submitting the article, Bruce has parted with his hardearned cash and bought the A12, which says it all really!