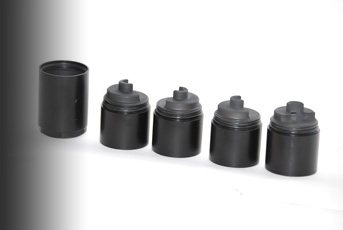 I recently tested a titanium moderator and I thought that was light at a mere 14oz. What I have here literally halves that weight, though to do so it’s muzzle-mounted in what some might consider a marginal material for such a light design.

The A-TEC CMM-4 (compact muzzle mounted, four baffle) moderator is not that new as I tested one the other year in an all-steel build. It shows a short expansion chamber with a series of individual, screw-on baffles. This to a degree allows you to vary the physical length and moderation effect so you can have short and hopefully effective. As I recall it worked well with 7mm-08 Rem (full baffle stack) though with more than one baffle removed it was well over the top to my ears.

As ever it’s a balancing act between weight, length and effectiveness of moderation, with the last being the consideration. However, a light can does offer far superior handling and given you can suit the moddy to the calibre then you might be able to achieve an effective compromise.

A-TEC importers Jackson Rifles sent me down the latest CMM-4, the alu, which uses a hi-strength, 7075-T6 aluminium alloy build and weighs a pleasing 7.7oz (220-grams). Pete Jackson accompanied this with a Sauer 202 in 243 Win and I have to say the combination of this light, 19 ½” sporter with the alu up front did make a handy package.

At 1 9/8 x 6 7/8” the alu is identical in build to the all-steel CMM, with a short, two inch expansion chamber topped by the four baffles. Inside these is a stepped design that forces the gasses to expand within the individual chambers then turn 90º to exit though a small diameter hole into the next one. So decelerating and cooling as they go.

Well Up For It…

Using high grade alloy with hardened coatings the alu proved effective with 243 Win loads using both heavy and light bullets. The only piece of steel in the design is the thread insert, which appears to be galvanised. The quoted noise reduction is 24-29 db (c). The alu is available in two options in terms of calibre - .26” up to 6.5mm and .30 up to 30-06. Jackson Rifles state that both models are for non-magnum cartridges only!

At the end of the day this is an aluminium can so it’s probably more prone to gas cutting after prolonged usage, which is unavoidable. However a two year guarantee is quoted, which is impressive! On that point you can get away with removing one baffle, but it does up the sound, two puts it right over the top. Length-wise a near 7” can off the muzzle is going to tell a little, on longer barrels, however the lack of weight is most welcome. Pete also supplied one of his Nomex moddy wraps to stop me burning my hands on removal.

Apart from the 202 I also fitted it to my Mauser M03 (223 Rem barrel set). This is a heavy rifle even with its short 19 ½” tube and I normally use an all-steel Ase Utra Compact. Length was about the same but a 2/3rds saving in weight was most pleasing along with effective moderation, even with one baffle removed.

Overall this is a neat and effective design that if used with sensible calibres is going to do the job with no real weight penalty at all.

For: Light and efficient given the right calibre
Against: Adds seven inches to the muzzle
Verdict: f you want a truly lightweight can for normal UK-type cartridges this is it