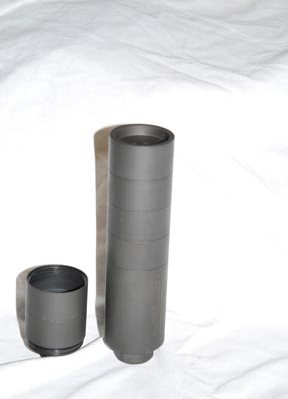 It’s amazing how fast moderator technology has progressed in the area of centre fire rifles. With more players both domestic and foreign, there’s a wide choice available. Two milestones are the reflex (over-barrel) types best demonstrated by the BR Tuote. More recently a true modular design (Wildcat Predator 8) that allowed you to tailor the amount and/or aperture diameter of baffles required and the size of the expansion chamber too.

Last year A-TEC of Norway introduced their over-barrel model - the Standard Telescopic into the UK. The most notable difference was the short expansion chamber compared to its long baffle stack, which is at odds with other reflex builds.

James Clark (Jager Sporting Arms) who imports A-TEC in the UK sent me the latest CMM (Compact Modular Moderator) along with a Standard Telescopic as I had never gone hands-on with either design!

Muzzle-mounted, which is something that either appeals or doesn’t, the CMM is all-steel. Not surprising, given it has to handle all the gasses in a reasonably short space. The build consists of three areas – expansion chamber that threads onto the muzzle, the baffle stack and finally the nose cap; all joints are sealed by rubber O-rings.

What makes this design unique is the fact that the baffle stack consists of five, separate, screw-in sections, so you can vary the length/moderation effect to your needs. The baffles are cone-shaped with a raised/angled face around the exit/entry hole, which would appear to make the gasses work harder in getting through the matrix. So causing them to cool and decelerate as they do.

Apart from its modular ability, what really sets the CMM apart from comparable, all-steel, muzzle-mounted designs - Ase Utra Jet-Z CQB and S5 - is the fact that it has a larger expansion chamber. Equally surprising is the weight, as with all five baffles fitted the CMM weighs a pound as opposed to 1 lb 3oz of the CQB.

To my mind there have always been three views on moderation, when it comes to super-sonic calibres. The first says that the noise of discharge will be reduced so not spooking your target; well the animals around it to be exact… I see this as a 50/50 view, as I have shot deer from herds (some times more than one animal) with both silenced and un-silenced rifles. In both case the remaining animals have either stood or run no matter what noise was produced. Go figure?

Second the reduced report of a moderated rifle makes the shooter less obvious, which is generally no bad thing night or day. Thirdly the moddy by its nature can be used to stop hearing damage as it can cut out the high noise levels that cause it.

With this last in mind I know plenty of hunters who have the smallest possible moddy on their rifles that can offer this protection, with a further by-product being the aforementioned reduced signature.

The CMM was initially tested on my Mauser M 03 in 223 Remington, which has a 20” barrel; normally I use an Ase Utra Jet-Z CQB. I shoot a 60-grain Hornady SP over 26.8-grains of Vit N 140, which averages around 2940 fps. I do not have access to proper sound measuring equipment - so I use my ear. Comparing the two showed that the CMM and CQB appeared to give a similar effect, with maybe the former being just a fraction quieter, as it seemed to take more of the very top edge crack off. Or maybe it’s the different sound they produce; as the more I look at moderators the more I see a lot of small variables creeping in, which makes a 100% verdict less than certain.

There’s little doubt in my mind that the CMM works, but how low can you go? The real issue with muzzle-mounted moddies is length, as everything is forward of the barrel and though often lighter than a reflex, which spreads its weight over a longer area they do not feel so.

Measuring the CMM and CQB shows the latter gives a length of 5 ½” (in front of muzzle) whereas the former is 7”. So what effect does removing two baffles make? Well it knocks it down to near the same length and puts up the signature significantly, but not to that ear stinging crack we know is doing damage.

For cleaning the CMM comes apart easily by hand, I would say make sure you keep the threads greased, if not they will bind up with powder deposits.

For your information; A-TEC supplied these figures using a Blaser R93 in 223 Rem firing a 69-grain Sierra SMK over 24-grains of Vit N140, with CCMs using six (M5) and seven (M6) baffle stacks. As a control they used the Standard Telescopic with the following peak values:

If these are to be believed then that’s impressive, as a 17-grain 17HMR (2500 fps average) through a 22 rimfire SAK moderator is producing a mean figure of 127.3 dB. That’s the real problem with moderator testing, as figures - with the greatest respect - are quoted and unless you can confirm them they have to taken at face value…

Now a word on the Standard Telescopic, which I tested on a 7mm-08 (Remy 700 SPS/22”) and a 270 Winchester (Howa 1500/22”) along with the CMM. Output-wise the 7mm-08 sits nicely between 243 and 308 Win, so makes a good representative cartridge for moderator testing. However, 270 is considered by many to be one of the most unpleasant and noisiest of the standard calibres. Which I suppose makes it an ideal choice; as it’s going to push the system to its limits and maybe beyond… For a control I used an 8-baffle, Predator 8.

The Standard is made of aluminium and shows five, cup-shaped baffles, the first two being stainless steel to take the brunt of the blast, the rest are alloy. There is a further, half-height baffle that closes off the stack and leads into a small forward chamber with a hexagonal (10mm) exit hole.

The can is 10 ¾” long and 1 ¾” in diameter. There’s a rear nut that will allow access into the expansion chamber, but you need a big spanner to get it off! A nylon bushing is included to stabilise it over the barrel, which is held in by a circlip and rotates, which I found to give just that better positioning on the barrel. It can be bored out to accommodate wider tubes too. Length over barrel is 4 ¼” with a 6 ½” over hang. Size/weight-wise it strikes a good compromise. A-TEC recommend they are cleaned every 200-rounds!

Harking back to the difficulty of getting definitive results using the Mk 1 ear, this stage of the test proved that. With the 270 both the CMM and the Predator 8 sounded loud with an uncomfortable dig in the ear at the peak moment. By comparison the Standard Telescopic took that right away, which did impress me. Though there’s little doubt it’s a bloody noisy calibre!

However, on the 7mm-08 stage the CMM proved quietest of the three, with the others coming in near the same output. With this lesser calibre all noises were comfortably reduced. I took off two baffles from the CMM and though louder in 7mm did not hurt, though removing a third put it over the top to my ears…

Though a .30” cal bore I tried the Telescopic on my 223 and that to me sounded very good, but a friend of mine listening reckoned the CMM had the edge on it; again go figure? James told me that you can get a 6mm baffle stack, for smaller calibres, so in theory that should improve performance…

Calibre variations and ear impressions aside, I was generally impressed with the A-TEC CMM and Standard Telescopic moddies. Priced up around £260 they are not cheap in comparison to some of the competition, but they do the job and offer some interesting/useful features. Both metric and imperial thread forms are available, as are spare baffle sets. Of the two I prefer the Telescopic and will be ordering one with 6mm baffles for my 223.

The variable results I have experienced decided me to conduct a moderator test! To save any hassle and aggravation I have commissioned a non-aligned, professional/accredited sound pollution engineer for the noise readings stage, so no one can call ‘no fair’! I am currently working on the protocols to be used and will be contacting the major players for samples. If you are one and interested in being included please feel free to contact me: 01206 525697 [email protected] If not I’ll be calling you!