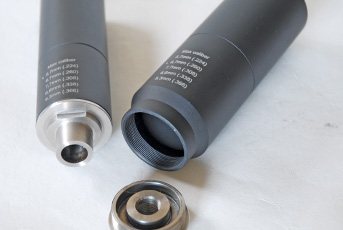 There has always been a lot of debate about muzzle-mounted (MM) or over-the-barrel (OTB) reflex moderators as to what is most efficient? From my experience I would say there is not a lot of difference between quality brands regardless of design, which begs the question does the OTB’s expansion chamber make a difference? A subject not easy to prove as you can hardly remove it to find out.

Well now you can, as aimSport’s aimZonic range of MM cans has added two new reflex models to their list called the Cyclone Compact and PLUS. In essence they are the existing MM models but with the addition of a special adaptor (nut) and rear unit that turns them into OTBs. First a recap of the brand, which are distributed by Alan Rhone.

The build offer two models the Compact and the larger PLUS, which are suited for all calibres from 5.7 to 9.3mm (no magnums), it’s just that the latter gives more moderation than the former, though both work well. The casings are aluminium with new models now having a rubber-like exterior coating and are available in black and a number of camo finishes. There’s a full test in the April 2013 issue, and also on our website www. gunmart.net and Alan Rhone has a video on his website too at www.alanrhone.com Inside is a tapered, multi-baffle insert (venturi) that the bullet passes through. Up front is what aimSport calls a bypass valve that surrounds the exit aperture. On firing some of the gasses expand into the body and pass directly through the valve so reducing pressure and all eventually vent out through the venturi in the normal manner. Quoted reduction is Compact 20 – 23 db and PLUS 23 – 26 db.

THREE OF THE BEST

Up against what I consider three of the best current moderators out there - Ase Utra, PES and Hardy Gen IV – my tests showed that the aimZonics did not make things any quieter (tonal differences aside, which are caused by materials and design) but they were not louder either! Where they really scored is their compact size and reduced weight along with a 5-year, unlimited round count guarantee and the ease of swapping them onto various rifles.

Whether Compact or PLUS they all use the same, stainless steel nut that screws into the main body, the only difference being the muzzle thread required and if you have a spigoted barrel. I now have both models; a Compact in 5.7mm (14x1mm with spigot) and a PLUS in 6.7mm in ½ x 28 UNEF that I can swap between my 6.5 Grendel and 6.5 Swedish rifles. Alan Rhone can supply any thread form you need. I now have a Cyclone Compact version for 308 (7.7mm) for test.

The Cyclone rear unit consists of the reflex body assembly with a plastic barrel stabiliser, which needs to be bored out to suit the O/D and the stainless steel nut. The front section is cupped with the bullet exit hole and threaded to accept the Compact or

PLUS moddy less its MM nut. Behind this are three tie bars (slots) that connect to the actual muzzle thread unit. On firing the gasses exit the slots and are diverted back into the expansion chamber with the moderator working in the normal way.

I fitted the Cyclone to a Sauer 101 in 308 on test this month and it certainly made a difference. The output was not harsh at all with no painful and noticeable spike in the ear and the expected dull report peculiar to the aimZonic build. I then screwed on a PLUS (308) and the result was a very flat signature out of all proportion to the calibre, I was impressed! Given the model quoted reductions values are – Compact 27 – 31 db and PLUS 28 – 32 db.

I should just like to point out at this juncture that the Cyclone should not be used on its own as it does not offer any true moderation effect. Out of enquiry I risked a single shot without ear defenders and it did spike, so forget that one. It’s an add-on device that augments the effectiveness of the moderator at the front and nothing else! Legally only the front section is classed as a moderator so no certificate is required to buy either the back tube or nut.

One of the aspects that drew me initially to the aimZonics was their light weight and compact dimensions. For example the MM Compact weighs 260-grams complete and adds 118mm to the muzzle. The Cyclone Compact weighs 375-grams, 200 of that being the reflex chamber/nut and increases outboard length to 161mm. The PLUS version is 448-grams and 178mm outboard. In general terms this does make them longer than your average, fixed build reflex, however it’s still shorter than other MM designs. Plus both are below the 500-gram weight cut-off.

Pricing and access is flexible. If you have an existing MM aimZonic you can buy the reflex tube and nut to turn it into a Cyclone. Conversely if you have the Cyclone you can get a standard MM nut to convert it back if required. All you have to do it nominate the muzzle thread. Conceptually a practical idea that works well and one that gives a deal of mission flexibility! I will be getting one plus 14x1mm and ½ x 28 UNEF nuts to suit. Given how well the Cyclone PLUS worked in 308, a 5.7mm PLUS could drop 223 Rem down to something really insignificant!