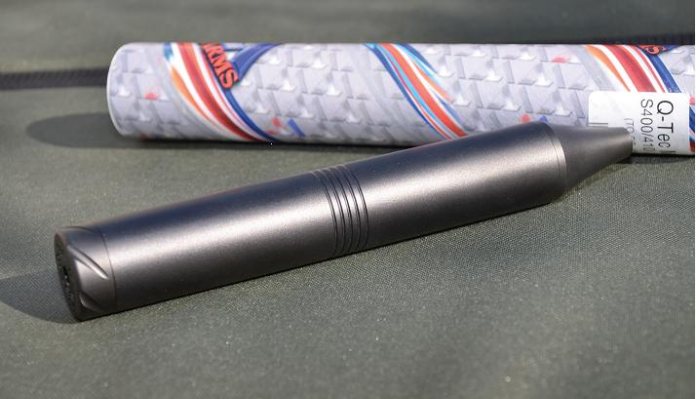 Silencers are a popular accessory but their effect on down range performance isn’t always a foregone conclusion. Whilst they can make some difference to a spring-powered airgun, with so much mechanical noise from the action to consider, (which the silencer obviously can’t alter), the end result is often disappointing. However, where they really score is with PCPs, as a pulse of compressed air is released from the main chamber, its rapid expansion invariably causes a real crack, and here, noise suppression can be nothing short of remarkable!

Air expansion and flow dynamics are surprisingly complex subjects, and Air Arms’ new Q-Tec Silencer is the result of some serious research, and the result is not only aesthetically pleasing, but quite dramatic in the field. Anyone who’s visited the Air Arms factory lately will be aware that it is now a state of the art, hi-tech facility, with some sophisticated technology at their disposal. The Q-Tec is inevitably the result of much experimentation. Fluid dynamics and simulation systems were utilized in the development process, and the end result is nothing if not impressive.

The new model, unlike previous Air Arms’ silencers, is calibre-specific, whereby the path through the silencer body is made so it is just a fraction larger than the diameter of the pellet; thereby ensuring that the majority of spent air is captured and dissipated efficiently through the unit, rather than allowed to escape unrestrained behind the pellet. The design sees the pellet exit the muzzle, then enter a ‘still air’ (plenum) chamber, then pass through a series of five baffles, and finally exit the unit in as unruffled a manner as possible.

Maximum sound reduction is the aim, and the Q-Tec largely achieved that goal. Air Arms claim that it’s some 10.92% quieter than the market leader! Whilst I wasn’t able to validate this with any scientific equipment on test, I was able to compare the new model alongside several rivals and an earlier Air Arms design and the Q-Tec proved not only impressively muted alongside, but an obvious outright winner.

A low reflection, hard wearing, matt black finish is highly practical. Couple that with the Air Arms signature ‘swirl’ end cap and what we have here is a super refined silencer that not only works superbly, but really looks the part. Exhaustive testing has ensured that accuracy is only enhanced, (certainly not compromised in any way) and with many competition shooters, as well as hunters, switching back to silencers these days, Air Arms should be well placed to take advantage of the trend. Available as either a slip-on unit for certain models, tightened with a 5mm Allen headed screw, or in ½” UNF male or female thread, there should be a Q-Tec for not only Air Arms’ own customers, but owners of many other makes of airgun too.