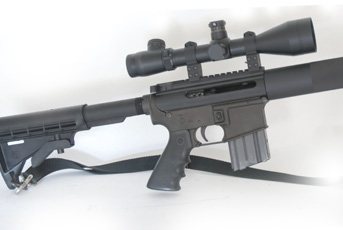 When I owned an AR15 I not only used it for Practical Rifle but also for hunting, as in 223 Rem it gave me an accurate and effective fox and muntjac gun. I naturally used a sound moderator – a muzzle-mounted, Ase Utra Compact, which suited the package nicely. However the only pain was undoing the flash hider when I wanted to fit the can. OK no big deal but what I have here would have been better as it combines the best of both worlds!

The system consists of an all-steel Ase Utra Jet-Z CQBS moderator with bore lock system and a special muzzle adaptor (mounting collar). This model needs little introduction as it has been around for quite some time. Surprisingly compact and very efficient when compared to moddies two to three times larger in build and more modern by design. I also use the Compact on my 6.5 Grendel with no complaints either! Plus its solid construction makes it near bomb-proof and with a squirt of oil it should last for near ever.

As sport shooters you normally match the thread on the moddy to that of the rifle’s muzzle, but in this case of Ase Utra’s Bore Lock system is set up for the standard AR15/M16 ½ x 28 UNEF form. To fit; remove the standard AR flash hider and screw on the mounting collar, which consists of a 4-prong unit with an exterior thread for the moderator with a ring of ratchet teeth behind it. The instructions also show a cage-type (A2) replacement flash hider and a simple adaptor with no flash hider at all. There are flats on he sides for a spanner and it’s recommended that you don’t fit a chevron washer if you had one on before. A screw-on cover is provided to protect the exterior thread and teeth when the moddy is not fitted.

As the CQBS screws on and off it’s technically not a true quick detachable (QD) design such as a twist-&-lock system often used on QDs. However, QD moddies can suffer from point of impact shift as they are fitted and removed, due to this very fact, which tends to be a symptom of the design.

Ase Utra’s Bore Lock seeks to remedy this and also the oldest problem of the can unscrewing in use, which is endemic no matter what sort of rifle you use.

At the rear of the moderator is a sliding collar (mount nut) which is locked by a catch. Behind this are three, equidistant teeth that engage with the ratchet teeth at the base of the mounting collar. To fit push the mount nut forward and screw the moddy on to the mounting collar until it stops. Press the catch on the side of the mount nut and pull it back until it engages with the teeth to lock it in place. The nut has four positions, as I found that sometimes the teeth were not fully engaged. But backing off the mount nut turning it and trying again got it done, as you have four positions and one always locates correctly.

In use the Bore Lock system proved its promise with easy ON/OFF and consistent mounting. Using a 16” barrelled AR15 firing 55-grain ammunition I could discern no significant group shift or increase in size when the can was fired, removed then replaced and shot again at 100-yards. As you might expect moderation was excellent as I have come to expect from Ase Utra and though heavy being all-steel the advantages of strength and longevity are to be recommended.

This is an excellent moderator system for the AR15 and though it will fit any 223-type rifle with a ½ x 28 UNEF thread is probably a little wasted on a sporting bolt-action. However, it would be the perfect solution for my Ruger Scout Rifle if it was ever offered in 308 Win…