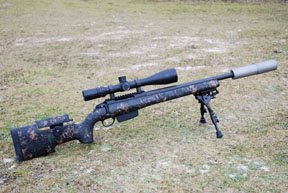 Finland seems to be at the cutting edge of technology when it comes to the manufacturer and design of firearm’s moderators, with Ase Utra (AU) being amongst the top names. In the UK they stand out as one of the few companies who only offer muzzle-mounted cans with their Jet-Z, Compact and CQB and S Series models. Being a confirmed reflex (over barrel or telescopic) kinda’ guy I never thought much about the AU designs, until a few years ago; when I was turned onto them by my good friend John Rippin. Truth is they are very efficient in what they do and, though obviously hanging off the end of the rifle, are not that large.

I now use them for a number of my rifles and apart from their ability I like the fact they are exceptionally well built with what looks like thick steel plate. When compared to the far thinner, pressed sheet steel of the BR Tuote or softer alloy of other makes they strikes me as near bomb proof…

About two years ago AU introduced the S Series, all-stainless and as ever muzzle-mounted; the S5 was wider and shorter in build and has proven to be another good design. Plus the added advantages of stainless construction makes it just that bit more corrosion resistant when compared to the carbon steel of the Jet-Z series.

A Change In Direction

So I was surprised when Peter Jackson (Jackson Rifles) who imports Ase Utra, BR Tuote and SAK moderators mentioned that AU would be making a reflex. Now a North Star (NS) NS-3S model is sitting on my desk and I have to say after testing it on a 308 Tikka T3 that I am more than a little impressed.

OK you could simply write the NS off as another reflex design, but when compared to a comparable BR Tuote T8, which is a great can and very much the yardstick over here, you find that the NS is shorter, slimmer and weighs about the same, due in the main to its noticeably heavier, all-stainless steel build.

Peter could not supply me with a schematic of the design, but it uses the same style of baffle stack as the S Series in the front end integrated with an over-barrel expansion chamber at the rear. However, closer inspection shows a bit of the old Jet-Z design about the NS, as all these models have a short/primary expansion chamber in front of the baffle stack and so does the NS-3S, which connects to the main one at the rear.

Also different is the lack of a rear polymer bushing that all other reflex type’s offer. On a T8 this screws into the back of the expansion chamber and is bored out to suit the outside diameter (O/D) of the barrel. I found no instability problems at all, but it does seem odd not to have this rear support, which will in theory offer a deal more stability… Conversely you could argue that the can will set up naturally and not be pushed off centre by a badly fitted bushing. The inside diameter of this section is 0.980”, which needs to be born I mind if you are considering a really heavy barrel. The T3 Tactical’s O/D was 0.873”, which is near maximum.

The NS series is offered in two models - calibres up to .25-06 Rem (NS3.25) and NS3.30 up to and including 30-06 Springfield. Sound suppression values are from 24 to 28 db (c) with a recommended maintenance period of 5000-rounds and a two year/10,000-round guarantee. To be honest as long as you give it a squirt of spray oil after use it will probably go on for ever; especially as it’s all-stainless and of a slightly heavier build than a T8. I had a T8 Scout and that was still going strong after five years when I sold the rifle with it on… Simply because it kept the rust at bay!

By comparison I also measured up the following moddies just to see the differences:

On the range with the Tikka and a comparison 308 with a T8 up front proved to be the case to my Mk 1 ear, as the thump of this calibre was seriously reduced to near identical and non painful levels. Hardly scientific but that’s where we will be using moderated rifles and if they work as such then I have no complaints.

What did appeal was the more compact dimensions over the T8 and also less barrel over hang than my AU Compact. Yes it is noticeably heavier, but this weight is distributed back into the rifle. Add to this the all-stainless build and the fact it will probably last longer than you own the rifle it’s on for and you have yet another good option to consider. As for me I will be getting one for my 6.5 Grendel, as I rather like the look of the thing and it will also give me a chance to test it on a long term basis.

Overall a good first effort for Ase Utra, that now gives them a cost effective and high quality model that can more than compete with the other reflex designs out there.