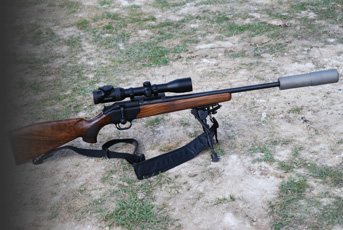 Ase Utra (AU) who are well known for the series of all-steel, muzzle-mounted moderators announced their first reflex design - the North Star in 2009. After testing I liked it enough to by one for my 6.5 Grendel, which I have used ever since. I also borrowed one for the 25-06 barrel set for the Blaser R93 I have on long term test.

The build is familiar with forward baffle stack and rear expansion chamber. Typically the material is thick and combined with the fact that it’s stainless it’s likely to last forever with proper maintenance. AU quotes a life expectancy of 2 years or 10,000 rounds but I feel that’s a conservative estimate!

It is also compact at 7 ¾ x 1 7/8” with a 4” muzzle over hang. At 22oz (700-grams), weight is a consideration, especially with the increasing trend towards lighter alloy and titanium moddies. It goes well over the 500-gram barrier which many now consider to be the top limit for a sporting moddy. This was certainly noticeable on my Grendel, as it’s light even with its 22” barrel, which does give a muzzle-heavy carry. However, this must be balanced against its ability and longevity; for me these two factors are more important.

The build is all-welded so not strippable, but being stainless and combining it with my usual practice of a squirt of spray oil after every session has seen it soldier on regardless. One noticeable difference (for a reflex) is the lack of a rear support bushing, which seems mandatory on all designs of this type. I have never found this a disadvantage and also consider this allows it to take a natural position and not be forced out of true in a specific direction. The rear aperture measures 0.980”, which is more than enough for anything but a super heavy tube.

In the field the NS proved highly effective with the 6.5 Grendel giving a short/flat report, the 25-06 naturally sounds louder but no hassle on the ear either. Its compact size is attractive and I have partially solved the imbalance problem and got a barrel-mounted sling stud so the rifle rides lower and does not slide down off my shoulder.

Since last year I’ve been out with the NS/Grendel combo in all weathers and seasons and have no serious complaints, which is the primary reason that I picked it for the 25-06 R93 barrel set too.

For: All-stainless build and efficient moderation
Against: Maybe a tad heavy
Verdict: A good compact reflex can that should last forever