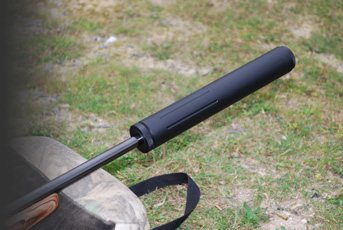 James Clark (Jager Sporting Arms) was the first to bring in the Norwegian A-TEC moderators into the UK a few years ago. Since then they have parted company, but James decided to go it alone and produces two in-house designs. The first I tested was the reflex, 17/22 Switch rimfire; overall a practical item.

On the fullbore side he now offers what he calls the J-TEC Ranger - with just a touch of ‘tongue in cheek’. You’d have to be blind not to see that this can takes more than a pinch of its inspiration from the original A-TEC, though in a couple of areas it is simpler. The price is where it really differs as it’s significantly cheaper, coming in well under £200, which for a fullbore moddy is a bargain.

The build consists of an outer alloy tube 11 ½ x 1 6/8th “ with flutes at the rear to wind it ON/OFF. Up front is a removable nose cap that retains the baffle stack, this consists of five, deep cones the first three are 7075 aluminium alloy with the last two (nearest the muzzle) being stainless steel. A further, half-height, stainless baffle sits under the cap.

At the rear is the muzzle adaptor tube that makes up the inner wall of the expansion chamber. Again 7075 alloy it features a stainless thread insert. This is separated from the baffle stack by a spacer tube, the end result beign a 60/40% build that has a longer/larger baffle stack than it does expansion chamber. This is different to other reflex designs.

The potential upside is more moderation volume, but with slightly more outboard length than the competition. As ever there is a synthetic bushing at the rear, which will stabilise the can on the barrel. This needs boring out to your tubes O/D and what I liked was it pushes in from the rear and is retained by an O-ring. Weighing ??? the J-TEC can be supplied for all calibres and is easy to strip.

Well designed and built the can is far from radical but still a good example of a reflex moderator. Mine came in ½ x 20” UNF though most thread forms are available. Control consisted of a Savage Model 11 BTH rifle in 22-250 Rem, OK not the biggest calibre but it’s capable of pushing Hornady’s 40-grain V-MAX load at over 3600 fps so noisy enough.

In terms of moderation the Ranger is an efficient design that takes a lot of the top end crack off the shot. I suppose I put about 30-rounds through it and to its credit it did not shoot loose internally. Overall this is an effective and efficient design and a decent working moderator for the money, which will give you change out of £180…

For: Well made and efficient design
Against: Maybe a tad on the long side
Verdict: At the money you can’t go wrong