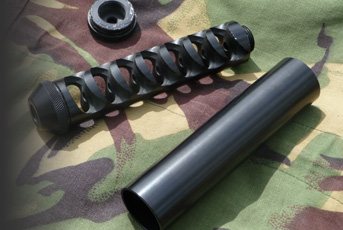 Wildcat offered their original Cub a few years ago, made from Delrin it was only for 22 Hornet and less. Last year they launched the Cub-2, which bridges the gap between the magnum rimfires and smaller centrefires; 204, 222 and 223. This necessitated a re-think on construction as it’s now made from aluminium alloy and shows a different internal design.

It measures 167 x 35 mm making it larger than the original. This puts it roughly in the same ball park as Wildcat’s Growler and Whisper rimfires. However at 240-grams the Cub-2 is around half the weight and size of comparable centrefire moderators and though very much in a calibre class, still offers near rimfire proportions for smaller centrefire needs.

The design unscrews for cleaning and shows three components: muzzle cap, one-piece baffle-stack/end-cap and outer sleeve, all sealed by O-rings. The seven baffles are convex, thereby deflecting more gas away from the bore and trapping it in each expansion chamber, and absorbing the maximum possible energy at every stage. The resulting profile is pretty easy to clean too.

I tried it out with four calibres; 22 WMR .22 Hornet, 222 and 223 Remington. The latter is obviously a higher-pressure round than the .222 for which it was proofed. However, designer Andrew Banner assured me that the difference between the two (a S.A.A.M.I. maximum of 50,000psi as opposed to 55,000psi) wasn’t critical, and the Cub-2 would hold up just fine – which it has.

For control I used an Ase Utra CQB, because its modest internal volume ensured it wouldn’t be over-capacity for any of the calibres and I know it to be an effective design. I wasn’t surprised to find the CQB outdid the Cub-2 on each of the cartridges. Does this mean you should buy a CQB? That depends on whether sound reduction is your only criterion: because even though the CQB is smaller its extra 300g at the muzzle is hard to ignore. So if you have a light rifle and want to keep it that way, or one that’s already heavy enough, I’d go for the Cub-2.

What about the Cub-2’s performance with comparable Wildcat moddies? Well, those present all reckoned it did a marginally better job on the 22 WMR than either the Whisper or Growler, and although the extra 40g was felt, it wasn’t regarded as a problem. So if you shoot a magnum rimfire and a small centrefire it will do double duty.

The Cub-2 is well-made, with a simple but advanced design that makes it light, relatively compact and easy to clean. It also does what it was designed to do; by providing 22Hornet and 222 shooters with a moderator that ably meets the demands of these cartridges with a minimal effect on handling.

For: Compact and well made design
Against: Perhaps a bit stretched with 222 compared to other designs
Verdict: In its calibre class a true lightweight option