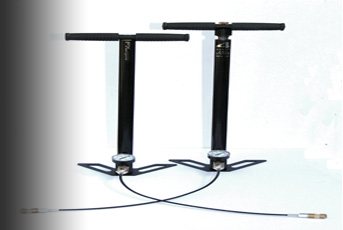 With many manual pumps now available, it’s strange to think that FX Sweden was the company that introduced us to the benefits of this simple, manually-operated system over the cumbersome diver’s bottle. Since then (mid-90s) they’ve developed the original concept considerably. I say this, as when it first was produced the effort needed to fill a rifle was not that tempting to those using the apparent convenience of a diver’s bottle. There are now many very efficient pumps to choose from so the effort needed isn’t a fraction of what once was! FX have two on offer - the third-stage and the four-stage Turbo.

The three-stage is relatively light and stands 24.5” high, as with most pumps when it’s bought new; basic assembly is required. This entails, screwing on the base/foot plate, external moisture trap and sorting (screwing in) the micro-bore hose. Uniquely the external moisture trap has a complimentary internal one so during pumping this doubly ensures no moisture enters the PCP’s air reservoir. The T-bar handles have chunky rubber grips for a secure hold and the design is simple to use and does what it says on the box.

The flagship model Four-Stage Turbo Pump stands slightly higher at 25.25” and those who use either say there’s little difference until you get to the top of a fill charge! Here the Turbo makes pushing in those last few CCs of compressed air far less strenuous due to some clever internal engineering. It actually uses a different and unique gearing system so you can switch between achieving high volume with low pressure and vice versa.

Now I’m no expert in pneumatics, but theoretically this gearing system should make pumping to high pressure faster and easier. The method to achieve this is actually stated with the recommendation being you pump in the first three quarters of a fill using 300cc of air per stroke which you chose by closing the top valve (the serrated edged brass dial found in the middle of its chunky handles.)

This automatically drops down a gear and fills with 200cc of air per stroke for the final part which of course is the most tiring. It actually works well but you slow down so though less strenuous the filling takes longer. Both pumps come with a 5-year warranty and in use their robust rugged build is certainly impressive. Some may say over engineered, especially when you can just open a valve and in goes the compressed air automatically when using a bottle. Personally I once felt the same, but over the last three years of use I now feel the mechanical pumps now available are viable alternatives, but they’ll never replace the diver’s bottle for effortless fills. Even experiencing some of the best designs on the market, I still only use pumps for top ups.

•For: A surpassingly efficient and practical alternative to a bulky air tank

•Against: Requires a bit of effort from the user

•Verdict: If you have one you can fill your PCP anywhere without any hassle

The FX Three and FX four stage hand pumps are up there with the best of them, engineering and efficiency is of a very high standard. Both use the same lower layout of air pressure gauge, external moisture trap, particle filter, bleed screw, hose and foot plate base