The Game Fair: Accessories All Areas 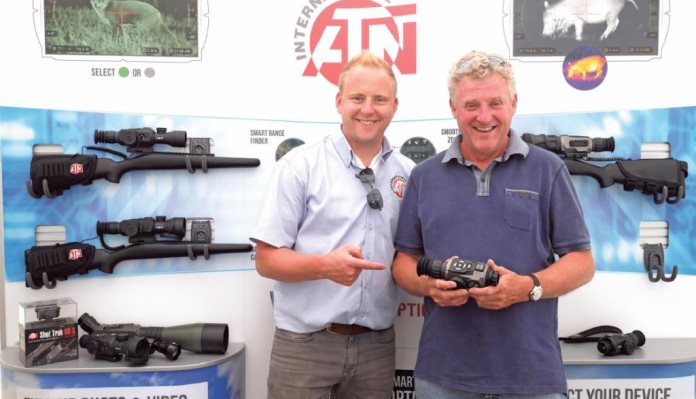 I covered new shotguns and accessories last month, but rifle-wise there wasn’t much except for Rigby’s superb Rising Bite and Big Game bolt-action rifles, and a new version of the CZ455 rimfire from Cogswell & Harrison with a walnut stock laserengraved with the firm’s logo.

All the air-rifle action, meanwhile, was on the shooting line at the Airgun Experience. The absence of manufacturers’ stands was disappointing, but hopefully it means that they will be out in force at the Midland Game Fair in September.

Also absent from the show were most of the big names in conventional optics. Swarovski were an honourable exception, as were Trijicon, whose UK distributors Beechwood Equipment showed me some of their latest offerings.

These included the AccuPower range of scopes, designed for the civilian 3-Gun and hunting sectors, which have batterypowered illuminated reticles rather than Trijicon’s usual fibreoptic system. Models are offered in 1-4x24, 2.5-10x56, 3-9x40 and 4-16x50 formats but only the last offers adjustable parallax via a side wheel. Classic duplex, Mil-Dot or MOA stadia reticles are available for each model, and there’s also a segmentedcircle reticle for the 1-4x24.

Trijicon also have a new civilian red dot sight. The Miniature Rifle Optic (MRO) boasts a large aperture and a tapered light path that maximize the viewing area, improving situational awareness and target-acquisition times. The 2 MOA dot is controlled by a handily-ambidextrous topmounted brightness control, and by coin-adjustable windage and elevation adjusters that are safely recessed into a fully-sealed, waterproof, hard anodised forged 7075-T6 housing.

Beechwood also distribute FLIR thermal-imaging devices. In the past, FLIR’s military/ LE focus has tended to price its products out of the general civilian market, but it recently developed new lens technology and a low-cost sensor called the Lepton, which enabled it to offer thermal devices for just few a hundred – rather than several thousand – pounds. The utility of the original Lepton was limited by its 80x60 sensor, but now there’s a new 160x120 version called the Lepton 3, and FLIR have used it to create the Scout TK: a thermal camera for the leisure sector… which includes us!

The FLIR Scout TK is a handy unit, ergonomically shaped and weighing just 170g. The sensor has a basic 160x120 resolution and 9Hz refresh rate, but extrapolates to a 640x480 LCD display with a choice of nine colour palettes. The non-magnifying lens offers a 20°x16° (H x V) FoV, and the TK can detect a man-sized target at 100-metres. On board is a rechargeable battery with a fivehour run-time, and a memory card big enough to hold up to four-hours of video or 1000 still images, downloadable via a Micro USB port. The price is very attractive at around £500, and FLIR also offer a reassuring 2+10- year warranty on all models.

The Seek products are amazing in their own way, but the Scout TK is the first Lepton device to strike me as being seriously useful in the field. It by no means replaces higherend units, but it does put a practical thermal capability within the reach of regular airgun, rimfire and airsoft users.

Optics tech-specialists Torrey Pines Logic have built this technology into their T12 series of rifle sights and offer models running at either 9Hz or 30Hz. Usually, I’d opt for the faster refresh rate, but as the 9Hz version offers more range and costs £85 less, it looks like the one to go for. The TPL sights are distributed in the UK by Scott Country, who say that a rearmounted magnifier is also in the works. I’ve not tried a T12 yet, so I don’t know if they’ve got what it takes for hunting, but they look like being a surefire hit with airsoft skirmishers, especially in FISH operations!

ATN’s range of smart digital day/night optics is now in its second generation: and is all the better for it. But alongside the new Gen2 X-Sight and Bino-X on ATN’s stand at the Game Fair were their thermal equivalents. These combine a thermal core with the now familiar software, controls and housings. The rifle sights come in three formats: 1.5x30 2.5x50 and 5x100, each with an 8x digital zoom. Compared to Pulsar’s Apex range, they have a larger (640x512) sensor, smaller overall dimensions and a bigger (800x600) OLED display, but a slower 30Hz refresh rate and a reduced contrast range. They also feature a removable QD Picatinny mount and a hand strap to make them easy to re-role for spotting or shooting as necessary. I would like to see an external rechargeable power pack though, as feeding thermal units with lithium batteries quickly gets expensive! I’ll be making for ATN’s HQ at Hereford shortly, to try the gear out in the field, so look out for a full report here soon.

As usual, Thomas Jacks had all the latest goodies from Pulsar. These included samples of the latest XQ generation of Quantum thermal monoculars. These take advantage of a new sensor with finer pixels to boost the detection range. There are other nice tweaks too: a compound jack that allows simultaneous connection of an external power pack and a recording device; a new button giving instant access to a slicker Stadiametric rangefinding function, and menu items that let you change the colour and brightness of the information in the display to make it easier to let your eyes adapt to the dark by going red and dim!

There were two new digital NV devices too: the latest iteration of the Digisight, the N970 and the Digiforce 860VS night Vision Monocular.

Compared to the N870, the N970 ups the zoom range from 4.5x-9x to 3.5x-14x, and adds five zero settings to each of the three weapon profiles that can be stored in the Digisight’s memory. If this sounds good, then so will the news that the N970 and the XQ Quantums will cost the same as the models they replace. Better still, the new Digiforce 860VS costs just half the price of the Recon 870R unit it replaces! Its features include 6.5X optical magnification, a detection range of up to 275-metres, a 640x480 OLED display, new software (including the redesigned Stadiametric rangefinder), an integrated covert 810nm IR illuminator and a Picatinny accessory rail for an external recorder, battery pack or illuminator.

Both Thomas Jacks (Spypoint) and Scott Country (Wildgame Innovations) had some nice new trail cameras on show. Spypoint’s offering includes a couple of affordable-but-high-spec classic models plus a pair of high-end models that take a SIM card and use 3G/4G uploads and MMS respectively to let users monitor sites remotely, and even in real time. It’s Wildgame Innovations’ 360 model that really stands out, though. Its camera and covert flash unit are mounted on a computer-controlled spindle inside a cylindrical housing fitted with motion sensors that cover a complete 360-degree arc.

As soon as the sensors detect movement, the spindle brings the camera to bear and triggers the shot! It’s like a cross between a lighthouse and a sentry gun! Wildgame Innovations’ cameras also feature a distinctive barktextured polymer housing that, along with their covert ‘Lightsout’ IR LEDs, should make them easier to conceal.

Scott Country also supply Wildgame Innovations’ Flextone FLX100 and 500 electronic game callers. These show a great feature set, look well made, have a clean digital sound and are very reasonably priced… and unlike a lot of US-made callers they also have European animal sounds in their repertoire. With the FLX500 you can load your own sound recordings too. I’ve got one on test, so look out for a full review.

Best known for their simple-butdeadly mouth calls, Best Fox Call also sell the ICOTec GC350 and GC500 electronic callers and now their PD200 free-standing and AD400 caller-mounted electronic decoys too. The Best Fox Call stand formed one corner of a rectangular area opened out in one side of Gunmakers’ Row, effectively creating a small courtyard providing extra stand space for smaller exhibitors and with café seating in the middle. This quintessential ‘niche’ marketplace had been created by Rob Crampton (Mr. Bestfoxcall himself), and artist, taxidermist and avantgarde milliner (yes, you read that right!), Kate Latimer. On one side there was shooting equipment, on the other, ladies’ clothing, jewellery and accessories, and in the middle a fantastic food stall – The Shotgun Chef – selling whole spit-roast partridges and other succulent game-based fare. Putting this all together – and bringing in people with lots to offer who couldn’t otherwise have afforded to be there – does great credit to Rob and Kate’s creative thinking and organisational energy, and indeed to the Game Fair team for recognising the value of the idea.

What unites a range of Canadian off-road vehicles, a provider of sporting breaks in Scotland and an animatronic unicorn? Two things: this final section of my report, and the unique diversity of the Game Fair!

The vehicles are by Can-Am, a.k.a. Bombardier Recreational Products, and are represented by the Outlander series of ATVs (quad bikes) and the Defender series of UTVs (side-by-sides).

Both were entirely new to me, but I was immediately impressed by their combination of sophistication and ease of use, and the attention to detail evident in every aspect of their design. These virtues, along with an engine and power train made in Austria, ready availability of spare parts, an ever-wider UK dealer network, and strong pricing, have made Can-Am the fastest-growing player in the sector. Despite being a recent arrival in the work vehicle market –having previously focussed on recreational/sports applications – Can-Am already have a firm hold on the right end of the stick, and their decision to offer their vehicles in Mossy Oak camo – as well as red or green – sends out a welcome shoot-friendly message. I had a very interesting discussion with their UK Commercial Manager about gun-storage options too!

Now to Scotland. I suspect a good many of us would love to take a sporting break, fishing, stalking or rough-shooting whilst enjoying a change of scene, but are put off by the idea that it might be beyond our budget or that we might not ‘fit in’. Sadly, the words ‘sporting agent’ don’t usually conjure up notions of either inclusivity or affordability. So it was a pleasure to meet Simon Wright, MD of MacIntyre & Thomson, who aims to accommodate the widest possible range of interests and budgets. You can fish, stalk, shoot or go hawking, or combine different pursuits, and opportunities are available for absolute novices as well as the more experienced. As Simon says: “You can decide what you want to do, and when you want to do it, and we can build a package to suit you.” So why not give them a call? (Just don’t be put off by the picture of a white-tailed deer on their highland stalking page!)

As for the animatronic unicorn? Well, a picture speaks a thousand words – but it just goes to show that the Game Fair has something for all tastes and pockets, and is full of surprises!