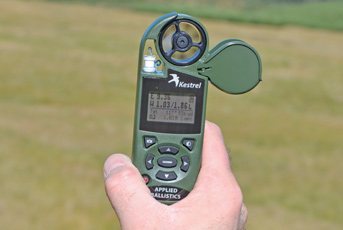 Two years ago I put the Kestrel 4500 NV with Horus ballistics through its paces and though it worked well I never learned to love it. When the similar 4500 NV with Applied Ballistics was launched, I decided to perform an extended test because the features offered by these units require serious study. It is impossible to cover all its abilities given the space but this time I had a definite conclusion.

Visually identical to the Horus, the Applied Ballistics differs only by external labelling to the casual observer. The same 5 year warranted body, impeller, moisture and pressure sensors nestle in the compact handheld unit weighing only 102 grams. A lanyard and carry case is included and it runs on 2x AAA Energiser batteries. There are certain calibration tasks to perform and others you are warned not to touch. Time, date etc. are entered along with a newly, more extensive setup configuration data log of up to eight guns and calibres, projectile variables, B.C. and more to record.

Bullet length is critical to spin drift and stability setting along with barrel twist rate and direction. Everything is done with eight rubberised buttons on the front using the LCD display window which can also be subtly NV illuminated a deep red colour. Five languages are catered for and the unit is waterproof and buoyant. The impellor clips in and out for easy replacement if it is damaged. With respect, the accuracy demands delicacy in this key component (the impeller can detect human breathing at 2 feet)

AIR THAT I BREATHE

All the same atmospheric parameters are monitored constantly to calculate a firing solution (the list is seemingly endless) alongside known input variables. The immediately obvious ones are range and wind speed/direction but when you really start to test your long range shooting, certainly beyond 300 yards, wind is not the only critical factor. The further you shoot the more humidity, temperature, altitude/air pressure etc. factor in. I must admit, I don’t even get close to noticing the tiny variables attributable to some, like Coriolis acceleration for example but for those who stretch the envelope, compensating all variables is imperative.

For example, Spin Drift is actually more important in my shooting than altitude. Shooting mainly in the UK, topography and temperature are miniscule compared to the United States for example! Applied Ballistics refers to the involvement of data and software from Brian Litz, the ballistic guru from Berger Bullets whose modern take on G7 ballistic coefficients rather than G1 values, are all measured and recorded empirically rather than just mathematically. The inclusion of ‘Drop Scale factors is also new and allows input of your own field data to refine ballistics into the envelope of transonic (1.1-0.9x speed of sound) flight where unpredictable disruption is usually encountered and further subsonic progress, which is generally understood.

A small instruction booklet is included but I recommend going to their website and downloading a set to print out on A4, although it isn’t hard to get this unit up and running in 30 minutes, it’s talents run very deep requiring thorough understanding and it is an on-going task. The more you use it, the more you learn to learn and I will honestly admit to not fully appreciating the previously tested Horus model before. Of every item I have ever tested for this magazine, this is far and away the most complex but after 6 weeks of its use, with just ONE main rifle I am now utterly convinced.

Imagine a 400 yard shot on a bearing of 0° north with gun `A`. Enter these into your current target solution and include an up/downhill angle for the terrain. Now press `Capture` in the wind mode and watch the numbers dance! As you hold the unit facing into the wind, the Kestrel calculates all its measurable variables along with wind speed and relative direction to the line of flight of the bullet. You can twist and turn to get the wind equally on both your ears for an approximate directional bearing but even if you aren’t perfect, the unit makes a close call on your behalf and it is uncanny how well it works.

The solution updates every few seconds and it’s a great learning tool as you often start to see identifiable trends, windows in time to pull a trigger? Don’t get me wrong, it isn’t infallible and can’t compensate for downrange wind speed/direction variables but you are starting out with a fantastic ballpark solution. After 4 weeks and hundreds of rounds fired in variable conditions and locations, with many corrections and updates to variables and cross checks performed with real world results entered into the computational algorithms, the unit becomes increasingly refined and accurate.

It is hard, especially at familiar shooting locations NOT to override what you are told with knowledge from personal experience. At a 900 yard shoot I decided to `dumb down` and shot the specific data the Kestrel advised. It was hard to trust it entirely but cold bore at 900 yards I was within 3” of the V-bull with total disregard of the wind flags. There is always a slight element of luck in a brainless shot like that but with 4 ¼ minutes of elevation wound on with 25 ½ minutes of elevation I take my hat off to the device. Being able to read the wind real time with a display output in your chosen scope increments is a real time saver and when shooting with a spotter/partner it was very fast to pull the trigger during an agreed `window` in the wind’s accepted pattern.

Before I became fully at ease with the reliability of the unit, I did discover one or two Achilles heels to be aware of. The first is that there are so many variable that can be altered, all equally accessible that you have to be very careful making sure you alter what your intend to. The second is that the internal compass that sets both your firing direction and then relative wind direction was a little temperamental. The instructions warn you to calibrate the compass whenever you open the battery compartment and to be sure to use the battery separator (a thin plastic wedge) as the magnetic field developed by the two AAA cells can make things go wrong.

I changed the batteries as the calibration mode worked intermittently with the supplied Energiser batteries but Duracell’s caused no problem. It isn’t a complaint, these devices are finely tuned whereas batteries are chemically churned out by the million, just be aware to look out for it as once detected and solved it has never happened again. Like any complex machine, you still have to keep your brain in gear and I expect likely buyers of this kit to already to have a fairly natural `feel` for its applications, functions and potential pitfalls. A few good solid hours will initiate all that is needed to further intuitively operate the unit and then every time you shoot, record and re-evaluate the data (as you should always try to do) then perhaps input new info and allow your Kestrel to evolve into the tool it was born to be.

It won’t be perfect first time but will be closer than any smartphone `app` with the ability to work forwards with data rather than backwards from results. For example, it isn’t mandatory to chronograph your bullet’s muzzle velocity, just enter your drop figure (e.g. 36.75 M.O.A.) at long range from your primary short range zero (0) and hey presto, it works it out for you using the other data. A brief library of bullets from Brian Litz is included and will continue to be updated using either an optional data cradle attached to your PC’s USB port or with the Bluetooth model that will work wirelessly.

I have so far mainly worked the unit with my 260 Remington as my favoured longer range gun but as time allows, will add further test guns (408 Cheytac imminent) and my firearms into the 8 gun library. They can be selected at a moment’s notice alongside 5 targets running simultaneously if required! Complex yes, it needs dedicated time to appreciate. A toy?.....Definitely not, it’s part of my armoury now.