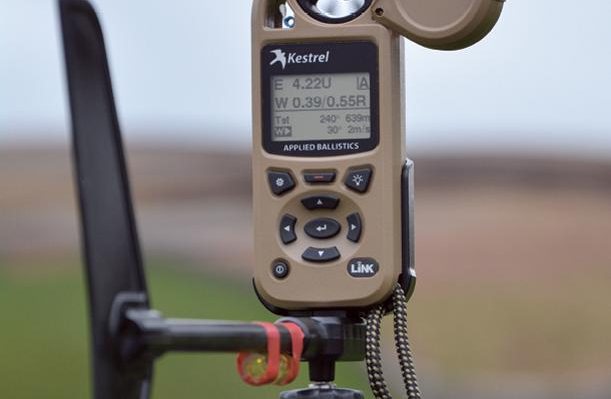 I have used anemometers to measure wind speed as both a learning tool and instantaneous assistant to making ballistic plans for a firing solution onto target for more years than I care to remember, with Kestrel always being the top of the tree in technology terms. The advent of smartphone apps with sophisticated ballistic calculators existed alongside the stand alone programmable solution from Kestrel in its 4500 Horus or AB Iterations which I have recently upgraded to the Elite Weather Meter with Applied ballistics, but the initial integration seen on the earlier model has now been far superseded.

Although visually similar to older versions, the Elite is, for starters, a lot faster, and has “Link” ballistics connectivity to improve range and speed over standard Bluetooth. Individual rifle builds can now be worked up faster on the easier to use screen and keyboard of iOS or Android smartphones and tablets before being shared across to the Kestrel, along with any firmware updates Nielson Kellerman (the manufacturers) deem suitable.

Firstly, unlike a lot of cheaper somewhat, Heath Robinson, devices I see in the shooting world, this is a professional tool and you don’t get let down by a warning screen every time you turn it on of limited connectivity or updates required. Updates I have received in the six-months I have been using the device have included streamlined minor details only, and have not been full firmware re-writes. This has been a pleasure because I hate endless updates and electronics in general – this is a tool for a task not a toy with an associated hobby required to keep it working. The link connectivity allows total two-way conversation between your phone on Wi-Fi in the home and just leave it for an hour and all is done automatically once you make sure your phone doesn’t `go to sleep` on standby every few minutes.

Setup for individual rifles takes about two-minutes with the expected inputs of calibre, muzzle velocity, bullet length, barrel twist rate, bullet weight etc., but perhaps most pivotal, there is now a bullet database incorporated for you to choose your projectile and whether you want to run G1, G7 or Custom ballistic coefficients (note custom B.C.’s are shown on screen as 1.000, ignore this even though it looks worrying high for anything below 375 Cheytacs and .40 cal+ etc.). The latter are the Applied Ballistic custom solutions for some, but not all bullets yet as expected, it covers those most likely to be used for precision shooting over long range. Brian Litz, the AB guru is the brains behind this system and although not the magic formula to all ballistics at ultra-long range, it is very accurate and lessens the requirements for so called `truing` of your trajectory. Flight into the transonic and subsonic regions can be modified with drop scale factors as well as key variable like the precise click values your scope’s turret REALLY adjusts your bullet flight. 0.01mRad at 100-metres is of little concern, but at 1500-metres it is a real problem you don’t need.

As well as chronographed inputs the Kestrel will work out approximated muzzle velocity from your input drops at longer ranges which works sympathetically with the fact that you will always need to continue working alongside the Elite to continue your learning curve and fine tuning process. Up to 30 guns can be stored in the memory with any adjustments fully available to be entered and transferred from Kestrel to smartphone and vice versa, just make sure you check your procedures a couple of times to check you are nudging the correct values and overwriting old set-ups rather than creating extra new ones. The nine-button keypad is tactile and faster in use now with a choice of white or red backlit screen illumination after dark.

The unit fires-up quicker and runs from a single AA battery. Previous Kestrels ran with twin AAA’s that required a separator between them to control adverse electromagnetic problems that affected compass calibration. You are asked exactly which battery you are using, Lithium is recommended and My Energiser has lasted six continuous hours on about 25% of the capacity. There is an accurate indicator on the display, so you are unlikely to be caught out but you can install NiMh or Alkaline instead in emergency. The Lithium has shown fewer problems with the compass calibration corrupting and it is far less fussy at setup when you have to turn the unit three times, 10-seconds per revolution for initial set-up. This does need repeating after updates and battery changes remember. Keeping clear of large metal objects is mandatory at this point but in the fields in use was rarely an issue unless you have Magnetite mineral geology under your feet.

In use the Elite does what the old Horus and Applied ballistics versions of the 4500 did – you input range to target, direction of fire and then point the Kestrel into the wind to assess all other atmospheric variables, alongside windspeed, to give you an elevation and windage value to dial into your scope’s turrets for an initial firing solution. Don’t forget this reading is based at current location and tells you nothing about the wind that drifts back and forth, up and down and reversals all the way to your target though. These can be easily ignored and significantly disruptive. It is also key to remember that at the midpoint in a bullet’s flight, it may well be tens if not a hundred feet above your line of sight to target which atmospherically is a whole different ball game. Where the Kestrel comes in is providing the ballpark data from where to learn and build your firing solution, especially where altitude and air density/ moisture content come into play and if needs be, you can also enter target angle up/downhill.

I made a big mistake when buying my previous 4500 by not appreciating what the Bluetooth connectivity allows you to do. As well as all ballistic profiles and updates in a database being made easier, it allows you to tripod mount the Kestrel away from your firing position, partly to keep it out of the cover you are choosing to shoot from but mostly so that in the wind vane mount, it constantly rotates to maintain accurate wind heading and speed.

Given its internal compass bearing monitoring with regard to the target’s location and firing direction, means it always computes bullet flight path versus wind speed and associated `value` of the wind as it applies itself to the bullet laterally. If the wind direction reverses, for example, the vane mount swings right round and your windage value will swap from `L` to `R` on the phone or tablet screen the device is paired with. This screen can be snuggled in close to you for visibility and displays a simple dial to indicate wind direction with elevation inputs and current versus average windage values to dial onto your scope. If a new target is selected, the new distance that you may have had from a separate rangefinder or BRF is input onto your remote screen and masterfully commanded to the Kestrel over `Link` but you will have to personally input the target’s compass bearing to update the windage values. Most phones have a compass on-board that can be used, or you can record them with the Kestrel itself, but this does mean going forward to physically point it and read the bearing when you change targets, or to make sure you have done this and noted it prior to settling down to fire from up to 75-feet away depending on connectivity. Of course, the professional users will be planning and mapping their entire shooting environment and the Kestrel won’t be the only tool at their fingertips but I will say this, it damn well works and with the devices never more than 20-feet apart, I never, repeat NEVER had any connectivity issues regardless of whether I was willing to be shooting in!

Spending time learning the device is mandatory and you won’t pick it straight up and get the best firing solution immediately but the more you use it, the more you benefit and I won’t be without one. When teaching, I like to have 4/5 ballpark solutions for certain ammunition types (223, 6.5x55, 308, 300 WinMag,338) programmed in so that I can advise customers on the range, who may have never shot at distance before, how to adjust their optics. Minutes of Angle or Mrad are fully supported with all variables easily swapped between metric or imperial units with immediate effect. Yes, if you put in a value for a right-hand barrel twist of 1 turn in 8-inch and swap units to metric, it doesn’t bin the value, it automatically converts it to 20.32cm immediately and similarly for all other chosen data. This is subtle but invaluable as so many shooters, me included, subconsciously mix data values in our specification setups and even though we work ranges in metres and elevation in mils, we measure bullet diameter in inches and velocity in feet per second, which the Elite has no problem with understanding at all.

Up to five targets can be run at any time with the ability to swap instantly between any of the programmed rifles. Ballistic tables are available to read down and for those wanting to compare calibres, this can be done here too although a slightly expensive tool for that particular job. The Elite is available without the Link capability but I see this as a false economy and a waste of the capabilities of the `linked` tool with the additional wind vane mount so I would personally recommend against this option. Save up a little longer as the top model is well worth it. For hunters and shooters with fewer demands for ultimate long range capability and the more high-tech functions, a Sportsman model is also available. You might notice I added a small level bubble to my wind vane to ensure it is set up level and not sag artificially towards its own imbalanced weight, rather than the wind direction. This was for use on a lightweight unlevelled tripod head and a larger one with integral bubbles won’t need this.

Once you activate Bluetooth on the Elite it automatically initiates whenever the unit is live with a Bluetooth symbol clearly marked on the smartphone or tablet screen to assure you both items are talking. I like the fact Kestrel have chosen to use a smartphone as a helpful accessory, not a mandatory requirement.

You can use the Elite wearing gloves, in the dark, with simple batteries and it is waterproof, which are not factors I appreciate in a smartphone. In these days of rapid electronic development that far outpaces mechanical collaboration, I cannot fault this unit for its trustworthiness and companionship to my shooting kit. It’s robust, compact, intuitive and reliable with data available far beyond what can be discussed over three pages here and as time goes on, I continue to learn and appreciate what is available. What I can say here is that further reading on the Kestrel site is worthwhile to outline far more features available than I have mentioned but that every single one I have investigated has delighted me with its capability and success in use.

The Kestrel Elite Weather Meter with Applied Ballistics and Link Connectivity is priced at £636 (£549.60 without Link connectivity), Wind Vane Mount £66.00 (fits to regular ¼-inch tripod thread). There is also a Sportsman Model with fewer functions but capable of later upgrade at £375.00.