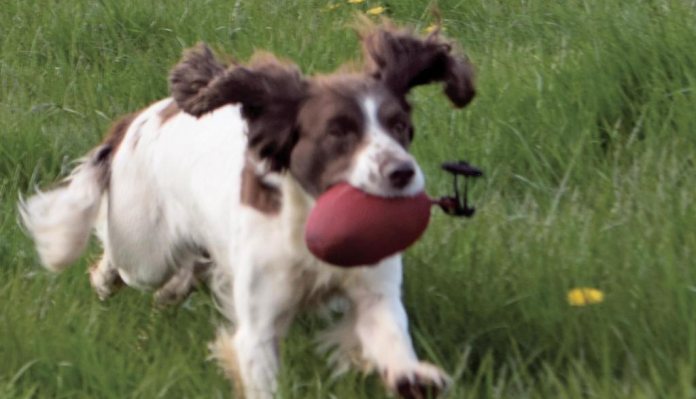 You were as excited as a puppy when your new dog arrived in the household. You may have waited months until the right moment to start the serious business of training to retrieve game. Apart from knowledge, guile, patience and praise, you’ll need something for the dog to retrieve. A dummy. If you’re thinking that all dummies are pretty much the same, think again. It’s developing into a science. So, we thought we’d put one of the newer products to the test. The Working Dog Company (WDC) makes a series of plump dummies, which seem do more than simply mimic the weight and balance of various types of quarry. So, just how well do they work?

WDC is based in Hitchin and was started by Jill and Ian Clinton some 10-years ago when their daughter’s black labrador, Jake, just wouldn’t get to grips with the traditional green canvas dummy. Jill and Ian developed a series of patented designs, one of which won gold in the prestigious UK Shooting Industry Awards. Their new dummies also solved Jake’s problem, and he went on to be a fine retriever of game. During the research phase, Jill and Ian discovered that dogs don’t really see colours much, but can distinguish well between lighter and darker tones. So, their range of pheasant, partridge and woodcock dummies comes in different colours.

When two of the country’s top dog trainers in the game world visited my home in Norfolk, it was a great opportunity for us to get our teeth into the WDC’s partridge dummy. Their pedigrees are impressive. Margaret has trialled workingbreed gundogs for well over 30-years, runs highly successful training weekends in the Welsh mountains and uses her dogs for grouse counting on moors in the North of England and Scotland. David has been working with dogs for 50-years, and over the last 22, he has been running English setters to help conservation organisations, such as the RSPB, in bird counting. In short, they know a thing or two about dog training!

The WDC partridge dummy is a plump 7-inches long and just over 12-inches in diameter with a short 3-inch double cord, and a lightweight 1¾-inch toggle at the end. The whole package weighs in at just under 8oz and is made of soft canvas, densely packed inside with very buoyant wadding – but no traditional plastic inner, as it turned out that Jake’s problem had been a plastic inner that had become wet and slimy. If this dummy gets wet, it just dries out naturally, or more quickly on a radiator.

To start, I threw the dummy for Margaret and her experienced Springer, Wisp. The dummy travelled around 30-yards, bounced quite high and then rolled to a halt. It had maybe travelled around 5-10-yards from the initial bounce, a feature which both Margaret and David liked a lot. “It gives the dog something to hunt for when it arrives at the initial impact point – then it has to track down the dummy by nose, but in a reasonably small area. This is just ideal. I really like the bounce and roll.”

Then David threw for his dog, Jim. Something didn’t quite work with his lob but the dummy bounced and rolled well. Jim was then sent in and found the dummy easily at about 20-yards distance in the thick grass. We duly gave David a bit of stick for being a rather useless thrower, so he determinedly threw again, putting in a lot of effort. We all fell about laughing and Jim looked very perplexed as the dummy flew backwards over David’s shoulder and into a blackthorn bush, dropping into the pond below. Something here wasn’t quite working. After we’d retrieved the dummy from the pond, with its canvas having passed with flying colours both the unexpected blackthorn and float tests, we gathered around to work out what had was going wrong. Margaret came up with the solution. “The cord isn’t very long and the toggle could do with being wider, more like your usual canvas dummy. Did you have a finger into between the cords for a better grip?” Indeed, David’s finger had caught in the short tight cords and he hadn’t been able to release it cleanly. Thereafter, the problem was solved and his throws were good.

After more retrieving practice, Margaret eventually spotted an interesting difference between the usual green canvas and the WDC dummies – the latter’s plumpness meant that the dog had a little difficulty releasing it to hand. The old-style canvas dummy is flatter, so it’s easier to slide out of the dog’s mouth, while the dog had actively to open up its mouth to release the WDC dummy. Wisp wasn’t used to this, but if you use the WDC dummy regularly, the dog will become quite accustomed to a more open release.

So, in the end, how did our two testers rate the partridge dummy? They both loved the dummy’s springiness, and especially its bounce and roll, which they thought was a critical improvement on old style dummies. Both wanted the dummy to be softer, but as it then wouldn’t bounce quite so much, they decided maybe it was fine as it was. The cord and toggle could both be bigger to make throwing easier, but its robust design and strong stitching marked this out as a very well made, quality product.

David lives in Wales, so particularly liked the red dummy as “It should sell well at home as it looks exactly like a small rugby ball in Welsh colours!” Margaret has a bête noir about trainers using tennis balls, which she considers a dangerous choking hazard for a big dog. “This is a splendid, much safer, alternative.” She then asked sweetly if she might just keep the test dummy to use on her dog training weekends. Well, that says all you need to know, I think!