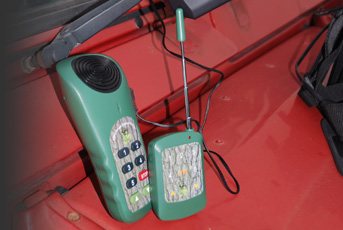 Electronic game calls have become all the rage in the UK over the last few years. Able to replicate the sounds of specific animals/species they are mainly used for fox shooting after dark. I have tried a few and owned a couple and have had mixed results; sometimes Charlie will come in like a wire-guided missile other times you are just wasting your batteries. Truth is the ones we miss get savvy in the same way as they get lamp-shy. Or they are simply too far away or aren’t fooled.

However, it’s always good to see what’s new and in this case it’s the AJ Universal Game Caller imported by RUAG Ammotec UK Ltd. The call comes in a two piece set – call unit and remote control, a separate 5 watt speaker is an optional extra.

Made of green plastic the caller runs on 4 x AAA batteries (included) inside this compartment is where the interchangeable sound cards locate. Easily hand-held it measures 7 X 3 X 2” and features an integral speaker along with a belt clip. Controls consists of 8-buttions on the front face 1 to 5 select the individual calls with up/down volume and STOP. On the right side is a 3-way switch – ON/OFF, ON integral speaker only and ON/RF remote control.

Above this are two jacks for DC 9 volt input and audio out (remote speaker). The caller will shut down after 10 minutes if not used to conserve power and also has a low battery warning light. When switched on a red LED can be seen, which is also a good way of locating it after dark.

The remote is about the size of a packet of cigarettes and comes pre-fitted with batteries and has the same pad functions as the caller and a telescopic aerial. Once selected (ON/RF) the caller can be operated at distance, I got it out to around 100-yards, line of sight with ease.

The 5-watt external speaker runs on 6 X AA batteries and also has a DC 9 volt input jack. There are volume and tone controls, belt clip and strap hanger. A short 30” cable is supplied to connect it to the caller.

Sounds are pretty realistic but as a fox shooter I am not interested in birds and would have preferred all the animal calls on one card as opposed to beign mixed in with bird noises. I say this as the cards sits inside the battery compartment so it means popping off the lid pulling it out and inserting the new one. Better would have been an external slot.

In use you simply press the corresponding selector button to active your chosen call. Spool time differs with for example call one on card #1 (hare) running for 45 seconds. However, call three (rodent) only goes for 25 seconds.  At any time you can switch to another sound by pressing the appropriate button. Calls do not recycle but stop at the end of their time and have to be reactivated. Practice is the word here!

The ability to remote operate up to 100-yards was certainly useful, likewise the external speaker. Though the noise and volume of the integral one was good enough for most needs and the ability to clip it to your clothing was equally useful. However, the short, speaker connecting cable means that if you want to change a card you still have to walk out to the unit. It would however, not be too hard to splice in a longer section of wire to suit…

Overall a good working system with a couple of minor niggles. Sounds are realistic and it should be able to call foxes into range; providing they want to come… One thing I must add; in the UK it’s illegal to use an electronic call to attract birds for the purpose of shooting them. But it’s all right for four legged critters – go figure, because I can’t work it out…

For: A reasonably sophisticated and effective system
Against: Card change is a bit fiddly and menus a little disorganised
Verdict: At the money well worth consideration though we don’t think the 5-watt speaker is essential