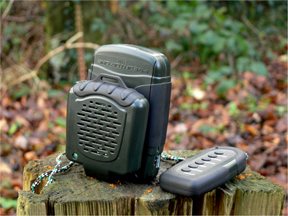 I’ve recently been testing three new electronic predator callers from Deben; two from Cass Creek and one from Johnny Stewart, both big names in the growing US caller market.

Of course, with practice you can call in foxes effectively with just your hands, and there are any number of “blown” calls available for the purpose too: so what are the advantages of an electronic caller?

Well, principally the fact that everything’s done for you: just switch the caller on and it’ll keep making the sounds you want until you switch it off, leaving you free to watch and shoot. An added bonus is that most electronic callers now offer some form of remote operation which means that as the fox comes in it’s looking at the caller and not at you, making it easier to mount your gun without being noticed.

Cass Creek callers are constructed from rugged plastic, edged with a rubber bumper strip for extra protection and grip, and fitted with a spring-loaded belt clip. The body of the caller is textured to resemble bark and coloured green, black and brown for camouflage, although this effect is interrupted by the red-and-yellow Cass Creek logo and the white labelling alongside the controls.

Standard controls include a knurled power/volume wheel on the r/h side, and five rubber sound-selector buttons. On the basic caller (£39.95) these buttons are smaller than on the more sophisticated Nomad unit (£89.95), but there is also more space between them, which makes it easier to get the right button when wearing gloves. The same sounds - jackrabbit, cottontail, coyote howl, pup yips and fawn distress - are loaded on both the basic and Nomad callers, though the basic caller is also available with an alternative set comprising woodpecker wail, racoon pups, kitten distress, grey fox pup, and rodent squeal which I suspect is better suited to UK use.

The basic caller also has an audio port with a rubber splash cover on the l/h side. This allows the caller to be used with CC’s matching Amplified External Remote Speaker kit (£29.95), which includes 25 feet of cable and a camo lanyard so you can hang the speaker from a branch for extra range. The speaker is powered by 4 AA cells, while the caller itself takes 3 AAA cells. Together, the caller and speaker will add just a pound to your kit and should fit into the bellows pocket of a shooting coat.

The Nomad caller is larger and more rounded than the basic unit, and in place of an audio port there’s an antenna for wireless remote operation. There’s also a 3-position switch marked A-B-C, which we’ll come back to later.

In wireless mode primary operation of the caller is via a remote control that fits comfortably in the palm of your hand. Volume is controlled by two buttons on the r/h side of the unit and the level is indicated by a line of 5 red LEDs on the front. Alongside them are the five sound buttons and above them a yellow rocker switch and three clear buttons marked A, B and C.
Wireless operation gives the Nomad a range of 50m, giving the hunter more options as regards concealment and his choice of killing ground, and further flexibility is provided by the Nomad’s unique “moving sound” feature – which is what the ABC buttons are for.

The A-B-C switch on each caller allows it to be set to one of 3 different channels, each of which can be selected by the buttons on the remote. This enables the hunter to use multiple callers and to shift the origin of the sound from one to another, perhaps drawing a fox out of a piece of cover in the first place and then tempting it further into the open by shifting the sound to a caller closer to the shooter, or, alternatively, manipulating the fox’s route from one caller “way-point” to another to get the safest shot when arcs of fire are limited. However you apply it, it’s an ingenious and, as I found, an effective feature.

There were a couple of things I didn’t like about the Nomad, though. In the first place, the profusion of red LEDs on its remote is less than stealthy in the dark, and secondly, its powerful speaker may be good for reaching out across the prairies or competing with a howling wind, but less is often more when calling and even at its lowest setting the Nomad is too loud for a still evening. There’s also an audible hiss and crackle when the receiver activates and the sound is rather distorted, which is a shame, especially since these problems don’t affect the basic caller.

Compared to the “cartoonish” air of the Cass Creek designs, the Johnny Stewart Predator Attractor (£49.95) is a sober-looking unit, in dark olive green with black rubber sheathing on the top and sides. Unusually, the speaker is mounted in an adjustable head. This is a neat design feature because folding the head back against the main housing gives the caller a broader and more stable base, allowing it to be stood safely on walls and fence posts as well as on the ground, whilst folding it out gives a flatter profile that comes in handy when hanging it from a branch by the lanyard loop moulded into the top.

The battery compartment holds 4 x AA cells and has a sliding cover, which is more convenient than the screw-fastening CC design. Like the CC callers, however, there’s a power/volume wheel on the side and an LED by the speaker – though this one’s green – plus an audio port with a rubber cover. You don’t need a remote speaker with this unit, since despite the lack of an external antenna it’s wireless, and comes with a handy remote control.

This has six buttons: five calls plus a cut-off button, which comes in very handy and gives extra control once a fox is in sight. The sounds are good too. Some of them may appear odd, but between them baby bird, cottontail, puppy cries, rodent and woodpecker offer a variety of whines, squeals and squeaks that are perfect for British foxes. The sounds are crisp too, and the volume range allows for subtlety as well as a reasonable amount of power, and if more power is needed, a booster speaker can be connected via the audio jack. My only quibble is that you can’t adjust the volume via the remote as you can with the CC Nomad.

Naturally, none of these callers is as versatile as the more expensive reprogrammable units on the market, but they’re a great deal more affordable, and, just as importantly, they work. Whilst I’ve had foxes with all three, the effectiveness of the CC calls with their more limited range of useful sounds has dropped off over time, whereas the more appropriate and subtle sounds of the Johnny Stewart caller have proved consistently effective, so it’s the JS call that ultimately gets my vote.