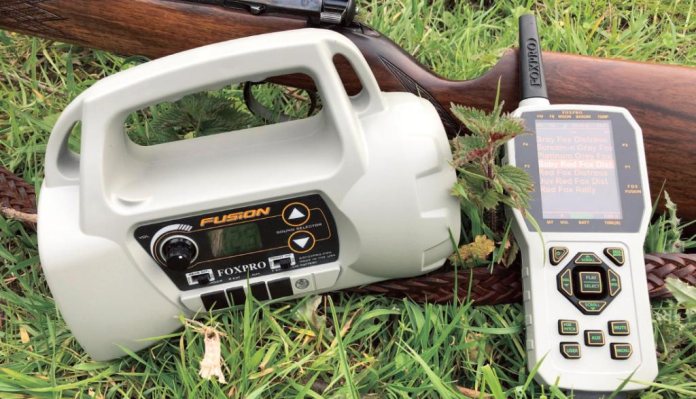 I guess that you could say that I’m quite a ‘keen’ fox shooter and try to get up to my local farm regularly to keep the numbers down, as they have been a real problem over the years. I usually shoot an Anschutz bolt action rifle in 22 Hornet and use my hand to call foxes into a shootable range, generally anything under 100-yards but the closest I’ve shot a fox is actually 8-ards, as it simply kept coming! My ‘squeak’ is obviously pretty convincing, as I’ve shot untold foxes over the years, but I’d never used an electronic caller. I was recently sent a FoxPro Fusion Digital Predator Call by Scott Country and what a revelation it’s been!

The Fusion is a two-part system, the caller itself and a handheld, remote control unit, called the TX-1000. I’ll start with the caller itself. The body is made from a tough, ‘sage green’ ABS polymer and is 8¼-inches long, 4¼-inches wide and 6-inches high. It comes with 100 highquality FoxPro sounds already loaded on the 4GB memory and can store and access up to 1000 sounds from the company’s website via the mini USB port in the battery compartment. The unit weighs 2-pounds 7-ounces but that’s only really relevant when carrying it from place to place. The front houses a horn speaker, with a cone speaker at the rear; the front is to produce higher tones, such as fox and animal distress sounds and the rear speaker handles low frequency sounds. The two speakers combine to produce a crisp, realistic sound and they can be used together or separately. It’s even possible to use them alternatively, to mimic movement – very clever indeed! If the in-built speakers aren’t loud enough for you for some reason, you can add two external speakers via the 3.5mm jack plug ports on the side. There is a carry handle built into the top of the unit and you can add a carry strap too; the base is flat, so it’s very stable in use. I don’t suggest deliberately miss-treating the Fusion, but it looks like it will withstand anything the average shooter can inflict on it when in use – it might not take to kindly to a high velocity bullet however!

Power comes from eight AA batteries, that are housed in a removable case on the left side, accessed by undoing a small, knurled screw. There is a charging point on the side as well, for use if you’re powering the unit with rechargeable batteries, which might be a good idea if the caller is to be used frequently. FoxPro sell the necessary batteries, case and charger. You can even replace the battery cover with a ‘FoxJack’ decoy, which produces movement via a short flexible cable that has a feather on top, powered by a silent motor. The FoxJack can be used manually, like the Fusion, or controlled by the ‘aux’ button on the hand unit.

The Fusion is turned on using the rotary volume controller on the right side and there are two, up and down ‘sound selector’ push buttons to scroll through the various sound options etc. There are also buttons to turn the speakers on or off as required.

Seeing at the caller comes with the TX-1000 remote control unit, it’s obviously much easier to use that to select features etc. It is approximately 6¼-inches high, 3¼-inches wide and 1-inch thick; it weighs 8¼-ounces and slips easily into a jacket pocket when not in use. There is a full colour LCD screen on the front that displays your sound list or sound categories, such as ‘Fox’, ‘Rodents’ etc. and, once you have chosen the category, you can then scroll though ‘Baby Red Fox Distress’ etc. to select the sound required for the task in hand.

The rubber control buttons are illuminated and easy to use and the screen can be altered for day or night use. It also has a barometer indicator, moon phase indicator, temperature indicator, battery level indicator, timer or time clock. FOXMotion allows you to fade the sound from the left speaker to the right speaker, to help fool the quarry into thinking that the ‘wounded animal’ or whatever is moving around. FOXFusion allows you to mix and match any two sounds at the same time during your calling sequence, so you could have the sound of a fox attacking a rabbit, for instance. FOXPitch allows you to manipulate the pitch of the sound and FOXData allows you to record real time information, so that you can access the data for future reference.

Well, how does this caller perform? In a word – amazingly! When calling foxes, yourself, the fox is obviously reacting to a sound coming from your position, which has its advantages and disadvantages. The advantage is that the fox often gets closer and closer (hence my 8-yarder!) the downside is that any slight movement or sound can alert your quarry and they high-tail it into the distance! By having the caller away from your position, the fox is concentrating on the sounds coming from somewhere away from your location and you can really exploit this.

On my latest outing, I set up the Fusion next to a wooded area near a stream; I knew that foxes were around, as I’d shot one there a few weeks previously. I concealed myself in some bushes about 60 yards away and turned on the ‘Jackrabbit Distress Call’ and then the ‘Lil Rabbit’. Within about 5-minutes a fox had appeared and down it went! I left the fox where it was and turned on ‘Baby Red Fox Distress’ and another fox zoomed in and down that one went. When repositioned, another fox ran from my right at full pelt and stood over the caller! During the evening, I used a variety of different call sounds and it was great to be able to alter the sound as well as volume, as and when required. I shot seven foxes that night and could have had at least one more, as it caught me out, as I wasn’t quite set up when it dashed out from cover! I’d recently shot another five on another trip using the Fusion, so it’s been an invaluable accessory when culling foxes.

As you can tell, I’ve had excellent results from this great caller and it’s a really versatile, adaptable product; so, the FoxPro Fusion Digital Predator Call gets a huge thumbs up from me. A caller that has foxes literally running out of cover has to be recommended!