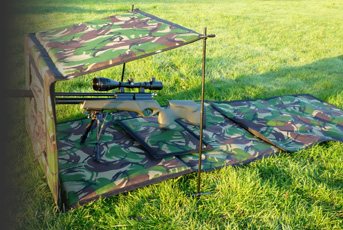 It’s always nice to come across innovative new shooting kit, so I was delighted to make contact with Tony Yates of Custom Sporting Mats and Hides. I saw a post Tony had made on an internet shooting forum concerning a mat he’d designed and made; it doubles as a hide whilst shooting vermin and his description, along with a couple of photos of it in action really whetted my appetite. I contacted him straight away to see if I could get hold of his new product and a few days later Tony and his wife Karen were on my doorstep with the very item!

Tony and Karen had been making Field Target bean bag seats, pellet pouches and shooting mats for a while, which had proved to be very popular with shooters at the air rifle club they run. Word quickly spread and they were soon selling their products on the Internet.

Tony often spends long periods waiting for rabbits to appear on his local shoot, and obviously uses one of his own mats to lie on whilst shooting off a bipod. He’d tried various methods of camouflaging himself, but he wanted something that was portable, quick to erect but effective. He therefore decided to modify a mat so that he could lie in comfort whilst being concealed from his quarry. To do this he cut an aperture to shoot through and reinforced the mat so that it remained rigid when it is used as the hide. Two steel rods are pushed into the ground to support the two end sections; one section, the one with the hole, is vertical in front of the shooter and the other is above his head. This then forms a sort of shelter with a firing slit 16” wide and 11” high. The structure is very secure when assembled and only takes a minute or so to erect. Tony showed me two versions, one with a vertical slit and one that had a horizontal aperture and I recommended that the horizontal slit version would be more usable. With a piece of cammo net over the hide it ‘disappears’ pretty well and Tony’s had no problem rolling the bunnies over while using it.

The mats are made from heavy-duty waterproof DPM material with reinforcing tape stitched to all the edges and brass eyelets for the support rods. They are 29” wide and 85” long when laying flat.  They come in four sections, so that they can be easily folded for transportation. The sections ‘concertina’ into a compact package secured by sturdy clips, with a pair of carry handles too. The way they pack away means that the side that you lay on always remains clean, far better than roll up mats that spread mud on the ‘clean’ side as you roll it up.

Tony let me have the hide for a while and I took it to my local farm where I set it up near a hedge. It went up very easily and stayed up perfectly even in a strong wind. Concealment was very good, especially with the optional cammo mesh thrown over and the mat was very comfortable thanks to the 10mm thick closed cell rubber panels inside. A couple of my shooting mates were impressed with the concept and build quality, and one is already putting in an order.

I’m glad Tony changed the design as suggested, as the horizontal aperture provides a much better field of view than the vertical slit. I also suggested a cover for the cut-out for when the item is used as a conventional mat and this is included too. It attaches with Velcro and stays put until you need to use the mat as a hide. Tony even includes four cammo mesh curtains that can be fitted to the aperture, so that the hunter can see his quarry without being seen by it - a neat idea. When the mat is used as a hide, there are obviously two sections used for concealment, meaning the shooter’s lower legs are hanging over the end of the mat; an extension is now included to keep the shooter’s trousers out of the mud. The extension simply clips into place. I like the idea, well I would, it was me that came up with it…

I only had the mat for a short time, so I didn’t really get a chance to use it in earnest, the lousy weather we’ve been having didn’t really help, so I can’t wait to get hold of one again and take it to my golf club shoot after some wary rabbits. I’ll be able to lie on the fairway in comfort without my quarry knowing I’m there and pick them of at my leisure.

I’m getting rather lazy these days, so the Hideaway looks to be the ideal accessory for anyone like me that like taking things easy whilst bunny bashing. These mats are obviously very well designed and manufactured and will put up with years of wear and tear out in the field. I can see fox shooters and deerstalkers employing these mats too, so it looks like Custom Sporting Mats And Hides will be very busy in the years to come. The Hideaway costs £98.