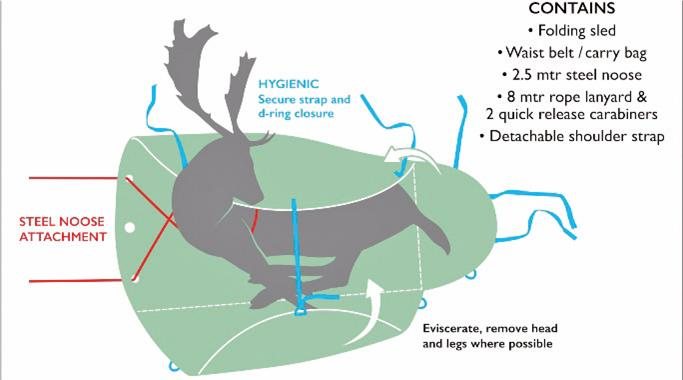 When Steve Rowe (MD) of Napier of London introduced his first product from the then new Apex range no one had any idea how this little snow ball would gather momentum as it rolled down a seemingly endless hill of ideas! I use some of them myself and on test is their latest’s; the Apex Ready Sled.

Consider this; so you’ve shot your deer, what are you going to do with it? OK something like a munty you might be able to carry out on your back, but if it’s a larger species you’ll have to drag it, which poses its own problems; such as carcass hygiene and movement. But I’ve got a 4x4! Big deal sometimes the terrain or ground conditions will not allow access. A solution is some form of man-powered system.

The idea is not new but and typical of Napier their approach is innovative and all-inclusive! It weighs 2kg comes in a bag with sling so you can easily carry it on the hunt, it consists of a large, rounded shape with a short tail at 45x65”. It’s made of a tough, rip stop material, with integral strengthening skids, along with securing straps, a 2.5m steel noose, 8m of rope with two carabineers attached.

Where possible it’s best to gut the deer and removed legs and head to save weight. Open the sled with the logo upper most and place the animal on it with its rump facing the extended tail end. The noose is placed around the shoulders so it anchors under the arm pits, or the neck (given it still has a head) and is then passed out through either the single, central hole or the two either side of it at the front end. With that done wrap the sides and then the tail section over the carcass and secure the straps, so the animal is effectively wrapped up tight.

The clever thing is that you are dragging the deer with the sled wrapped around it and not the sled, as that can cause strain and material failure as I have found with similar devices. The carry case doubles up as a padded webbing belt, as once set up you thread the 8m rope through the loops in the noose ends and attach it to the belt with the carabineers. According to preference it can be waist or shoulder positioned. When you take up the load the front end naturally rises and forms a pointed shape, which makes it easier to drag and also stops dirt/debris getting inside. As always reducing carcass contamination is paramount!

Napier says that the Ready Sled is good for animals up to 150 kg and for that read from a Roe to a large Fallow, White tail or Boar. It certainly works and it’s really down to you as to how much weight you feel you can pull over a given distance and terrain. It’s washable and packs down easily into the bag so easily stored in a vehicle or carried on the hunt.