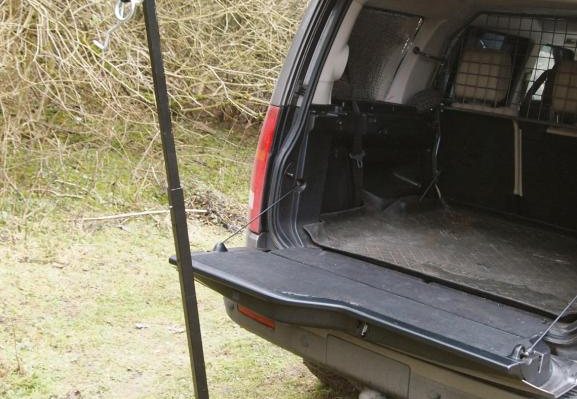 I’ve known Steve Rowe, the MD and driving force behind Napier of London, for many years now and in that time watched him grow his company into a name that stands for quality, innovation and lateral thinking. Their range of products is huge, going from things like a DIY gunstock finishing kit, magnetic spent case pickup tool and a lot of gun luggage, to name but a few. There’s also the Apex range that is aimed at hunters, with a choice of items all designed to make what we do in the field easier. Notable products include the Ready Sled for dragging deer carcasses and the Predator, which is a bum bag combined with a fold-out roe sack and the list goes on. More up to date are the Tree Hugger suspension system and the Auto Lift, which is a field ratchet that can lift up to 200 Kg loads; great for gralloching deer from a suspended position.

Wouldn’t it be good if…?

I think it was 2-years ago that Napier introduced yet another labour-saving device to the hunter, the Auto Click. It was an adjustable-length strut system that allows shooters to use the tail gate of their estate or hatch back car as a hard point to hang deer off for gutting. The strut engaged into the base of the tail gate when open and located into the locking pocket in the chassis and took all the weight. The idea being that there’s less chance of contamination when gralloching in this suspended manner, it also makes the job easy to do singly, even on larger species. It certainly worked, but for those of us with 4x4s and there are a lot out there with side opening or split tail gates, of no use!

I asked Steve; what about something for my Landy or any other 4x4 and he said he was working on it? This year at the IWA show he showed me the latest product to join the Apex range; the Truck Click! Whereas the Auto Click was designed for hatchback-type vehicles using their tail gate, the Truck Click is based around that most common feature on a 4x4 vehicle - the towing ball hitch. Currently it can use either a 49 or 51mm diameter, but not the larger US 63mm size but Napier are working on an American version.

The Truck Click is a substantial design, as it has to support itself and take up to 200 Kg loads reliably. Made of powder-coated, steel, box section tubing; it consists of a folding, bipod base with a telescopic, height adjustable arm with a hook on the end for the winch, and the support arm that attaches to the ball hitch, which gives it its name. What I liked about it initially was that it comes in a strong, compartmented, rip stop, PVC material tote bag, the same as used on soft-sided container lorries. The bipod-type base and height adjustable arm assembly fold up for storage; also included, are an Apex Auto Lift (complete with gambrel) and their Aqua Sack. This is a 2-litre water container complete with gravity-fed tube and spray head, so that you can hang it next to you and use it to wash your hands or the inside of the carcass. There’s also extra room for storing other gear like gloves, knives and bone saws etc. The tote bag is zip-closed and features handles and cinching straps.

Set up is simple and fast. Attachment of the support arm to the ball hitch is accomplished by a swinging clamp called the ‘click latch’, which is self-locking. Position the base of the arm on the left side of the ball hitch shaft and swing the click latch closed where it will automatically lock shut. There’s enough tolerance to allow a bit of movement to the arm when it’s offered up to the bipod section of the base. To remove the arm, press down on the orange top hat and swing it open!

With the arm attached, fold out the legs of the base section, so that they form the support bipod. These are height-adjustable by press-in, sprung buttons to account for the surface and have clip-on rubber feet to spread the load. Now offer the base up, so that the support arm can slide through the square socket and insert the locking pin, so that the two parts are securely attached together.

The base can be slid along the bar for optimum positioning, as the idea is to have as little angle off the vertical as possible. With that sorted, slide up the inner telescopic arm, which is locked by sprung buttons and gives two extended positions to get the height required. This extends a bit over 6ft, as with the Auto Lift in place, you have to operate it easily. Now you are ready! With your beast properly shot, hock it; (slit through between the rear legs between the bone and large sinew tendon). Now, unlock the Auto Lift, and grasping the ring, pull it down; it offers 2.5m of flat, nylon webbing, so will easily reach the ground. Insert the gambrel through the loop in the webbing and into the hocked legs and you are connected?

Now, engage the Auto Lift’s handle and crank it and the beast will start to rise. With a capacity of 200 Kg, as can be imagined it will deal with most animals, large and small. The good thing is that there’s no effort involved in lifting and handling the carcass, which becomes an easy one-man job! Now give it a wipe down and fold it up and stick it back in the bag, which will live in the back of your 4x4. My tester was in grey, which is now being replaced with black/anthracite grey, which does look better!