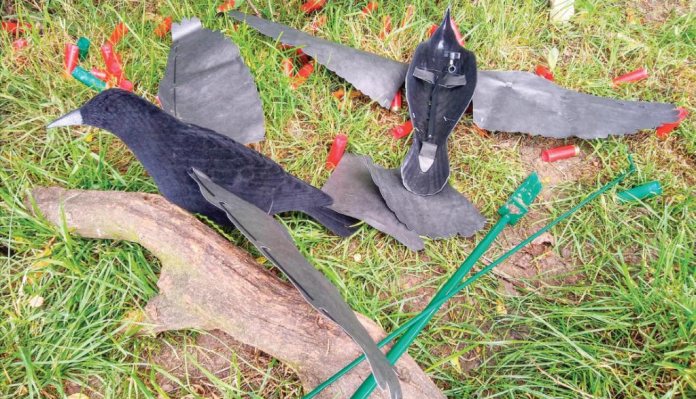 I do plenty of corvid shooting, so the crows and jackdaws on my permissions are pretty wary. Consequently, I am always looking for some extra pulling power. So when I heard A1 Decoy had launched some new flying crow decoys under their Pro Flap brand, I reached out to them and they came through with a brace of decoys and some other neat bits of kit.

The flying decoys are obvious rivals to Sillosocks’ Hyper Flaps, insofar as they have a rigid body, fabric wings supported by a flexible strut, and a loop and wingnut underneath for attachment to a bouncer or rotary/magnet. Wind or rotary motion produces an airflow over the fabric wings which oscillate, simulating the flapping of a landing or circling bird.

The Pro Flaps outdo the Hyper Flaps in four areas: the body is a flocked shell decoy reinforced with a steel frame, instead of a two-dimensional cut-out made from flocked plastic sign-board (Correx); the tail and wings are cut from a tough rip-resistant membrane, rather than nylon plush fabric; and the wing support is spring steel, not a fibreglass rod, giving a better balance of stiffness and dynamism. Finally, the loop that secures the decoy to a rotary or bouncer is made from metal rather than plastic, allowing you to tighten the thumbscrew without fear of it cracking.

Out of the box, the decoys need a little assembly but this is easily done. First, you slip the triangular tail-piece through a slot in the rear and slide the turnover in the end over a metal hook attached to the internal frame. Then you run the wing support over the upper surface of one wing, passing it through the slits in the wing fabric (taking care not to let the central loop snag on the slits as you go) before sliding the support through the body and repeating the process on the other wing. Finally, you lift up the centre loop and drop it over one of the two vertical pegs on the frame - rear for light winds, front for stronger ones - to anchor it in place. For transport, the support can be removed at any time and the wings wrapped around the body and held in place with a rubber band.

In the field, all the gear was easy to set up and performed as advertised. Attached to a bouncer the waggling wings of Pro Flap decoy worked pretty well on the crows but provoked more curiosity than confidence in the jackdaws, prompting fast fly-bys and making for some very testing targets indeed! Getting the rotary out transformed things, however, helping to extract the full ‘flappiness’of the decoys and bringing the birds in with conviction!