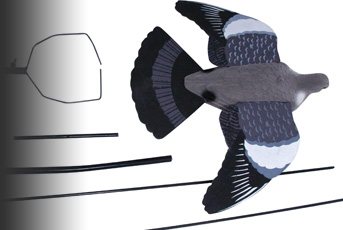 Bird decoys (deeks) have long been used by shotgunners to help entice their quarry within shooting range. As time has passed we’ve seen many hi-tech gadgets appear; some work and other less so. But items like whirligig rotary pigeon decoy machines, electronically operated flappers, peckers and even duck ‘n’ divers are now an established part of the scene.

However, quality decoys to be used in a pattern will always be needed and are the bread and butter products of the companies who specialise in this area. As virtually every pigeon shooter knows, flocked shell or full bodied deeks work far better than the cheap ‘n’ cheerful shiny traditional ‘plastic’ ones that we’re thankfully seeing less of year by the year.

This may come as a bit of surprise, as it was to me, but many of the specialised decoying companies and gunshops buy in their stock from Jack Pyke of England, who are perhaps better known for their ever-growing range of clothing and luggage in their own design English Oak and English Woodland camo patterns. So let’s see what JP has to offer to you deek geeks.

First up is the Flying Pigeon Decoy Set. The benefit of using a floater decoy, positioned to the side and rear of a conventional ground pattern of decoys is common knowledge. If not, use one and you’ll certainly see your bag grow. Consisting of a floater/bouncer rod, metal ground spike, extension piece, floating cradle and a full bodied ‘flocked’ flying pigeon decoy it rates as one of the best I’ve ever used.

So, what’s so special about this particular design? Unlike those using a conventional, one-piece spring steel rod with integral ground spike to mount the flying decoy, this uses a fibre glass pole, broken down into two pieces with a separate black ground spike. Immediately the first advantage of this is it’s much easier to transport, particularly as even the pigeon bit has removable, EVA foam wings and splayed tail. In fact all flying flocked JP deeks are produced in this way for ease of transportation.

The rods are constructed so they slip into each other, then into the 13” long and hollow tubular spade end ground spike. These are unhindered by any ‘fitment’ allowing the now fully assembled 65” fibre glass rod to work in such an effective way. The benefit of this free swivel ground fixing will become apparent. Both rods are sleeved at the ends for strength where it’s needed at critical stress points of a two-piece system such as this - rather like a fishing rod.

The top section’s outer edge is angled and sleeved. This is to accept the floating metal cradle which firmly secures onto the rod by a finger-friendly T-handle turn screw found on the underside. When the rod and ground fixing point are set at the required angle, I recommend 50-60° due to the weight of the metal cradle holding the bird when attached to the top slightly draws the rod down. The deek attaches to the cradle via two pre-drilled holes positioned just below the wings almost midway along the body. Fitted correctly, the splayed tail should now be sitting on top of the cradle and free to move up and down on the arms that clip around to slip easily into the slightly over size holes; hence the reason even the cradle is designated as floating.

As you should in all cases - face a floater into the wind, this design allows the pigeon to bounce, twist, turn, even bob and weave as would a live woody as it glides down to join the ground decoys before folding up the wings to clap on the breaks to land.

See it in action and you’ll never go back to the restricting, metal, floater rods after witnessing its effectiveness. The realism of movement is equalled by the highly realistic and well applied matt flock ‘n’ matt paint colouring. From a hide I’ve more than once, felt the rush, only to check myself as it was one of these floaters that had suddenly come to life and caught my eye as the breeze slightly strengthened and/or changed direction.

All Flying Flocked Decoys fit this special ground fixing and floater rod/cradle and all components can be bought separately. Even packs of ‘Wing Sets’ are available consisting of a pair of suitable wings and where applicable a splayed tail for the specific imitation decoy. Very useful should you lose a wing in transit or one is damaged. On some ‘other brands’, a broken wing or even ‘kink’ would entail the expense of buying the complete decoy.

Now to the Field Spike that some often feel unnecessary but when the ground is hard you’ll be glad of this 15” long, pointed and good quality steel spike with its T-bar, ABS, finger-ridged handle and tie ring. A godsend for helping start holes to put in ‘spring-sticks,’ it’s also useful as a sturdy hide stake and even makes for a quick and simple dog tether!

There’s so much more I could mention and detail - such as the realism of the flocking and colouring applied to all flying, full bodied or the stackable & lightweight Flocked Shell Decoys. As an example of effectiveness of the half-body and Crow Shell Decoys, like all shell-types come with the all-important spring sticks. Combined with the tough ABS abbreviated sprung ‘pegs’ the slightest breeze has them rock and wobble creating movement which is all important in creating the ‘Art of Deception’ that can entice even the wariest of avian pest species within range.

For the full range of decoys and related products visit the website or request a catalogue.

For: Well thought out decoy system
Against: Not a lot
Verdict: Effective equipment and designs at good prices