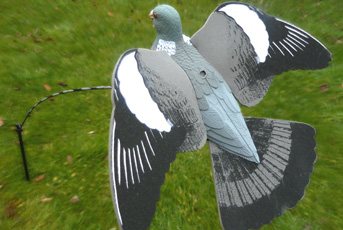 Few would disagree about the importance of incorporating movement into a decoy pattern: it makes it more visible and more authentic. Moreover, if you can give the impression that birds are continually joining the pattern you stand a better chance of convincing any that see it that they had better get their share of whatever goodies are on offer without delay!

Undoubtedly one of the most popular means of achieving this is the rotary motorized pigeon magnet or carousel, which over the last decade or so has – ahem - revolutionised the way many pigeon shooters go about their sport. However, even though these devices have become a good deal more portable over the years, especially with the advent of lightweight batteries, there’s still a place for the traditional floater or bouncer.

You know the sort I mean: a hollow steel rod with a kick plate at the bottom, and an extendable and flexible top section with a spiked end fitted with a pair of wire spreader arms tipped with crocodile clips. Having first pushed the foot into the ground facing into the wind, you take the first bird of the day, impale it on the spike, clip its wings into the spreader –ensuring the white bars are fully visible -  and adjust the length of the top section so that it bobs up and down as if making its final approach into the pattern.

Traditional floaters do have some drawbacks, though, the most obvious being that you need to have shot a pigeon before you can set it up. Impaling the bird is not for the squeamish either, and – speaking as a chef and glutton - it means the regrettable spoiling of a bird that would otherwise have met a much tastier end!

It was with such thoughts in mind that my eye was caught by an advertisement for Gareth Jones’ Nemesis pigeon decoys (http://www.clayandgame.co.uk), which represent an ingenious new take on this old idea.

First of all, the floater is based around a plastic, blow-moulded, full-body pigeon decoy, so there’s no need to shoot a bird before you can get started. Moreover, whereas the weight of a real bird can cause a traditional floater to fall over in soft ground, there’s no danger of this happening with the lightweight Nemesis.

The decoy features slots on either side and at the rear into which are inserted a pair of foam wings and a tail, appropriately marked with white wing bars, feather shading and black tips. And in case you’re thinking you’ve seen similar decoys in your local shop, there are a few things that set Gareth’s Nemesis decoys apart from the crowd.

To begin with, his base decoys are life-sized, unlike regular decoys, which are made larger than life to increase their visibility. As this is only an advantage with static decoys, on a floater it makes sense to go for a more compact design.

Next, the decoys are particularly well finished: hand painted with special non-glare paints that eliminate shine, and with wing bars and neck patches marked out with an ultra-violet (UV) coating that mimics the pigeon’s natural colouration and makes the decoys visible from a greater distance. Gareth tells me he doesn’t flock his decoys because tests showed that flocked decoys didn’t move as freely on the floater system, and that the finish on painted decoys lasted longer than flocking, which tends to wear off when decoys are being transported.

Finally, and most radically, there’s no wing-spreader or cradle, since the decoy attaches to the bouncer rod by way of a V-shaped wire support that passes through a vertical slot in its breast and pivots on tubular bearings under each wing. The tip of the V slots into the flattened tubular top of the bouncer rod, keeping everything on an even keel. This unique design means that the decoy automatically adjusts its pitch in response to changes in the strength of wind and angle of bounce, with the result that it looks uncannily like a real pigeon fine-tuning its approach as it comes into land!

Of course it also means that Nemesis faces its bouncer rod, which, instead of being locked by into the base section, is free to swivel. Thus the decoy works like a drogue, automatically turning into the wind. Not only does this mean you never have to go out and reposition the floater in response to a change in the wind, it also acts as a wind-sock, constantly monitoring the wind direction and making it highly unlikely you’ll fail to spot a crucial shift that might put the birds off the pattern.

An additional benefit of this arrangement is that the bouncer rod, with its grey/black camouflage finish, is less apparent to any pigeon approaching the decoy from downwind, since it is at least partially masked by the decoy itself, which must add further to the Nemesis’ credibility.

As for the base section, its two part telescopic design makes it adjustable for height from 20.5” to 37”, and the foot is tipped with a screw point that enables it to be securely planted in any terrain.

Two versions of the Nemesis are available, a floater and a lander. The former has a bouncer rod that measures 49” compared to the latter’s 11”, but the main difference lies in the angle of the slots for the wings, which on the lander show a greater curve and are set further back- and for the pivoting support wire. Because the wings on both versions actually function aerodynamically, this means that the floater maintains a more or less horizontal pitch as it bobs up and down, whilst that of the lander is more vertical, as befits a bird totally committed to the pattern.

Out in the field, both decoys worked extremely well, to the extent that every time I had the company of a guest in my hide it was only a matter of time before he was tricked by the decoys into standing up and mounting the gun on them! The pigeons seemed to think so too, because even when I set up in an awkward spot the birds showed themselves prepared to pull off some remarkable aerodynamics of their own in order to land among the decoys – a sure sign of a compelling pattern.

Portable, durable, self-adjusting, wind-indicating, amazingly lifelike, and they don’t need batteries. What more could you ask for?