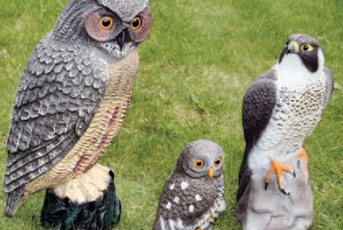 Decoys that imitate birds of prey (raptors) can really get a reaction from members of the corvid family, especially crows and magpies. Many of these ‘raptor decoys’ are manufactured by Italian ﬁrm Sportplast and also East Anglian Decoys. Most popular are the Great Horned Owl, Little Owl, Peregrine Falcon and Kestrel – some of which can be purchased with wings outstretched as if ﬂying so mount on a bouncer rod.

Though none are ﬂocked, they’re all highly detailed in design, proﬁle, size and overall look, while colouration is matte to prevent shine. The accepted reason they can work, is the belief it’s the large ‘glass like’ eyes that a corvid ﬁrst sees and homes in on. The few that have ‘ﬂapping wing’ capability such as the Little Owl Flapper, doubles your chances as the movement of the wings (controlled by a cord you pull from your hidden shooting position) catches the attention, then your quarry often comes over to harass and call at the raptor decoy from close by. Often they’ll land in a nearby tree. Choose the area carefully, place the decoy with thought, set up a good hide within range and you can have good sport dropping magpies and crows. Even jays will lose their cautiousness in their eagerness to join the ‘mob.’