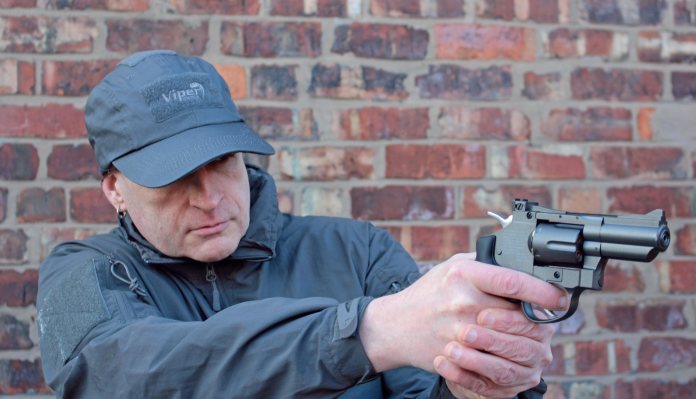 Since the country’s first lockdown, it’s not surprising that people have found themselves with more time on their hands. Many looked to fill the void with DIY and tidying the garden, while others began to remember the things they once enjoyed before the responsibilities of work and family swallowed up what leisure time they once enjoyed.

As a result, there has been a surge in airgun popularity, due to the simple fact that this type of gun can be used in the garden. However, that means within the boundaries of your property, with an appropriate backstop and of course you’ll require a selection of suitable targets.

Sort the back out

A suitable backstop is required by law, so pellets don’t go beyond the boundaries of your property. This can be constructed using a few solid old doors with thick carpet thrown over the front to lessen the penetration of the pellet. The carpet not only helps reduce damage to the wood and prevent ricochets but also absorbs the sound the pellet would make if being allowed to continuously impact bare wood.

This type of setup is usually referred to as a ‘plinking range’, and as long as you have at least 20-25 yards of clear, unobstructed, privatelyowned space from the shooting position to the backstop, then you’re in business.

What to shoot at?

Tin cans are not exactly what you’d term the norm these days, unless using a very low power plinking pistol for a bit of impromptu fun. Thankfully, there’s a wide range and varied choice of suitable targets for both 12 ft/lb air rifles and lower power pistols, including of course CO2 powered airguns.

Match-style paper targets are still the best for honing accuracy and are the top option for zeroing the sights on a scoped-up air rifle. Rather than keep pinning these up directly onto the backstop, there is another way to mount them and that’s by using an accessory known as a target holder/pellet catcher. These are made of metal, can be selfstanding or affix to a wooden board or post. As the name clearly implies, they are manufactured in a way that the outer front face has the facility for a target to be slotted into it. The metal sides and back of the unit catch the pellet and therefore render it safe rather than allowing it to fly on to possibly cause damage.

These target holders are nothing new, but some can be prone to ‘delivering’ a ricochet, especially if shooting at relatively close range. However, this is something that can be reduced by using a Cone Pellet Catcher. The name gives a clear indication of how this is achieved because due to the unit’s internal cone shape design, spent pellets are directed into falling at a downward angle and therefore contained within the unit’s strong metal housing. You’ll find units such as these from Jack Pyke and Bisley.

Another very useful target holder is the Pocket Zero from Impact Kinetics. This superb and well-designed holder folds out to reveal ground spikes and the upper arms are slotted so a card target can be slid into position. The design means that it can be pressed into soft ground or articulated to form its own base, for use on hard ground.

Before we leave paper punching, there is another form of a paper target that comes by the way of circular self-adhesive stickers. After successfully zeroing your rifle, these are very handy for honing accuracy as they can be purchased in different diameters with circular rings marked on them within the size of the sticker’s outer diameter. Usually, they’re of a Day-Glo orange colour because not only are they useful in low light, but also because the pellet strike is very easy to see, if you hit them that is!

Many shooting accessory companies offer these, so look to the major names at the bottom of this feature.

We now come to reactive targets, which can spin, swing, fall-flat or even explode when hit! A popular choice are ‘spinners’, which usually consist of a frame or stand which supports a series of different sized disks that simply rotate when hit.

Chalk discs are another popular ‘reactive’ target. They are simply hung on small nails that you can tack onto the backstop, or held on a special purpose manufactured board. These targets give a satisfying feeling of achievement as they shatter on pellet impact, and they really do help keep you practising for longer periods. They are simple but very useful as you can mount these at varying heights to create a real-life scenario.

Knockdown targets are nothing new and have been the norm in Field Target (FT) competitions for almost as long as the sport itself. However, the size of the plate that needs to be hit to knock it over, bears no relation in shape or position on the target to the kill-zone of the quarry it mimics. This is because the mechanics of the design oblige the makers to position a circular ‘hit zone’ in the centre, rather than at the head, for optimum target operation efficiency. In fact, there can be few airgunners who haven’t seen or at one time or another used a knockdown reactive target, or fall flat as they’re often known.

A company called Nockover Targets manufacture all manner of reactive targets, from simple spinner types and cord resettable fall-flats to custom ones known as ‘Specials.’ These are more challenging to target due to their design, and the Practice Field Target with variable re-set hole is a prime example.

These types of target have a facility that can reduce the main 40mm target aperture point to make it far more challenging to hit. The Hunter Practice Rabbit and the Double Pigeon with Reducing Wing are just two options the company supply and will find favour with many of the more serious target shooters.

A target that stands out from the rest is the Chukka Free Standing Multipoint Target from Jack Pyke, but there are other similar ones around. It has an allsteel construction and is configured in a star shape. This is seen as four arms that extend from the centre of the construction with each having a 50mm diameter kill-zone disc at the end. All discs have Hi-Viz orange target stickers (replaceable) on both sides to highlight the area you need aim for. It can free stand due to three of its arms always forming a stable tripod style base, which in turn holds the fourth arm, and its target disc, approximately 180mm vertically off the ground.

Once you hit this disc the whole target is tipped over, whereupon it will always land on three arms. Obviously, every time you knock the Chukka over it moves away from your shooting position. If you want it to stay within range, without having to keep walking forward, there are two pre-drilled holes in two of the arms so you can attach a pull cord to drag it back into position.

Due to the lower muzzle energy of CO2 powered airguns (pistols in particular), there are specialist targets that cater to them. These vary from target holders with plastic BB catching nets at the rear, to ones suitable for lead pellets. By design, the knockdown/reactive ones must be able to ‘react’ when hit by the lowvelocity projectiles fired from a CO2 pistol or rifle.

Walther offers selfcontained magnetic options and the Impact Kinetics Speedshot CO2 compatible ones have target discs that can be set very lightly. They can also be fine-tuned to allow for any amount of breeze there might be.

All targets are challenging depending on the size of the kill zone, but by and large, the target is what helps keep the shooter more interested. As a result, this helps to encourage them to practice longer and ultimately become a better shot.

There are other types of targets on the market and some will stay, some will go, but the ones mentioned here are more than enough to build an admirable home shooting range.