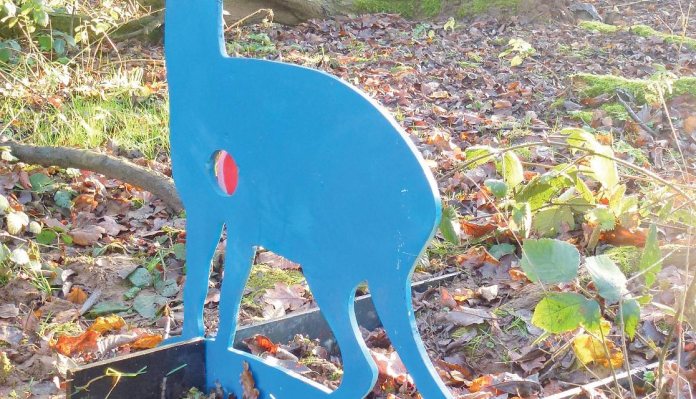 I’ve been using these targets for over a year and have walloped them with lots of different projectiles and at different distances. Which can’t be said about some other ‘steels’ I’ve used, which have been bent well out of shape, or even turned into Swiss cheese in a single session!

A steel target really brings home what an immense challenge it is to stop the bullet dead and disperse all that energy. With BH targets, bullets are vaporised or pulverised, and the spray of hot, high-velocity debris carves a groove in the ground and shreds anything within a few feet of the impact. Consequently, in a year of testing I haven’t observed a single ricochet. This doesn’t mean you should use them without a safe backstop, of course!

My interest in steel targets began when I got into long-range varminting and wanted something that would register hits at ranges where even a top-flight spotting scope could no longer see bullet holes. However, when BH Targets’ Bruce and Tracy Hutton sent me them for review, such was their confidence that they specifically asked me to put them to the test at much closer ranges and with as many calibres and bullet types as possible. This led me to discover the joys of centrefire ‘Field Target’ shooting at normal stalking and foxing ranges.

With targets placed in sites with safe backstops around your ground, and even regular ambush spots, you can do what air-gunners have done for years: shooting to confirm zero/point-of-impact prior to engaging live quarry. All this builds confidence and promotes success!

The round-up included two life-size rabbits, a half-size fox, a 200mm x 250mm fox-head suspended from two pickets and a chain, and a muntjac-sized roebuck with an active kill-zone (KZ) for heart shots. Along with a 2/3rd wild boar, full-sized fox with active KZs for head, as well as heart shots, 75mm, 100mm, 150mm, 200mm and 300mm gongs, duelling trees, head-and-torso targets, sniper and hostage targets, plus midi and mini jacks for rimfire use. And if you want something different, just give BH a call and they’ll work with you to get it made.

Targets are cut from 10mm thick sheets of AR500 steel. It’s a chrome-moly and boron-treated alloy, which is quenched and tempered to make it equally hard all the way through. The result; it’s highly resistant to impact and atmospheric corrosion and thus ideal for rifle targets that are going to spend a lot of time outdoors.

A CNC plasma cutter is used to create the shapes. As the fox shows, it’s capable of producing complex forms with great precision and smooth, burr-free edges. The only downside is that it reduces the hardness of the metal along the cut. I don’t see this as a problem, but wear safety gloves to protect your hands when moving well-used targets!

The targets came painted in a range of colours: the roebuck and fox were blue, the fox-head white and the rabbits, grey, but they’ll need retouching in between sessions to enable you to spot new strikes.

Most of the targets are supported by slotted stands, this simple solution proved entirely stable with the larger roebuck and small fox targets. However, the rabbits – with their shorter baseline- were a bit prone to tipping over when hit unless the stand was dug into the ground. BH has since replaced the strip with a deep triangular ground spike.

By contrast, the fox-head target was suspended by shackles from a heavy-duty chain slung between two steel pickets. Fun to shoot because not only does it rock and swing when hit but it also emits a resonant ‘clonng! so I’ll definitely be getting some more of these!

The KZ roebuck target was arguably the most interesting. It has a circular cutaway in its chest, behind which a pear-shaped flap hangs. When it’s hit, the flap is knocked backward, flips up on its hinge, and shows momentarily above the roebuck’s back before falling back into place. As the KZ is only 75mm across, it really encourages you to ‘aim-small’ to achieve a ‘kill’.

I found it best to paint the whole target face, including the front of the KZ flap, an even matte brown, whilst giving the rear of the flap a coat of day-glow red/orange. This makes the KZ, and the deer itself, harder to see, but rewards a successful shot with a flash of colour.

BH have recently updated the roebuck target by changing the profile to a classic side-on shot, enlarging the KZ, moving it further back to represent a heart-and-lung shot, and re-aligning the hinge so that when hit the flap swings horizontally into view -in the manner of their hostage target- and shows in front of the deer’s chest.

In this format, the size and location of the KZ are more realistic, a ‘kill’ remains apparent until the flap is reset, and a hit is more likely, thus helping to build shooter confidence. On balance, I think these advantages outweigh the instant-reset and the ‘aim-small’ mentality fostered by the original, and the redesign may also aid durability, as the hinge pin on the test target did bend a bit after repeated hits on the flap.