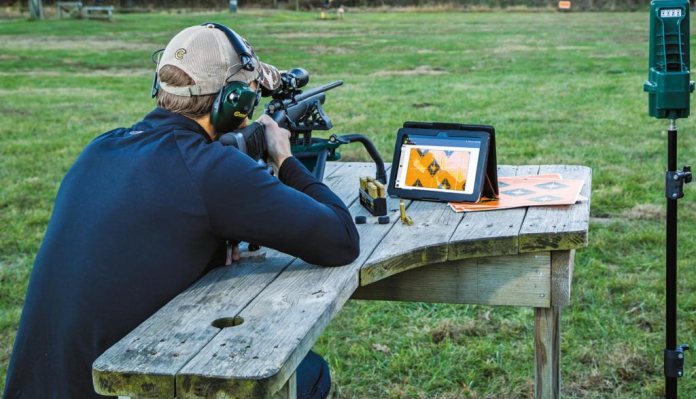 Do you remember when you were young going to the range and blasting away at the target and thinking- I wish I had enough money for a marker or spotting scope, as that long walk to the butts is really a pain! Well, I got a spotting scope, which helped no end, but in recent years there’s been a new and alternative direction as to spotting your shots and that’s the ‘target camera’.

It’s a simple enough concept with some form of camera at the butt end that points at your target, which connects to a monitor, usually by a Wi-Fi or Bluetooth link, as a cable would be too bulky and prone to damage. These days, with the near domination of smart phones and tablets and the fact that there are downloadable applications (apps) for just about everything, you can use them as a screen and control pad.

Caldwell Precision of the USA offers a wide range of shooting accessories of all types, not the least of which is their chronograph package, have now entered the fray with their Target Camera. It connects to smart phones and tablets by Wi-Fi. Like their chronograph, the camera comes well presented in a carry bag with full accessories. It’s simple to set up and connection is easy too, though I did have a few little problems, but then again, I’m thick as two short planks when it comes to anything that uses the electronic super highway to communicate with!

The kit consists of transmitter and receiver units, the camera with mount, two adjustable-height tripods, two ground spikes and twin chargers (US 2-pin). The units have integral, LI-ION 12 Volt re-chargeable batteries, with a quoted run time of 6-hours. There’s an optional, external power pack if you want a longer ability. All you need is to get a ‘3 to 2’ pin UK adaptor and download the free app; Android App on Google Play and iPhone from the App Store. This will then allow you to stream live video of the target, take single pictures and record in High Definition 720-p video.

We are told that the effective range is 600m (line of sight) and the camera and transmitter/receiver are waterproof and coated with an anti-UV finish for longer life. On that point, the US version is good up to 1000m, which has something to do with the band width or some other technical/legal mumbo jumbo. The carry case shows an integral foam block with individual cut-outs for the transmitter, receiver, camera units and the chargers. The tripods and ground spikes are in sleeves on the outside. So far, so good!

The system is line of sight, so the transmitter (target end) and receiver (shooter end) must be able to see each other. The tripods extend to 7ft, which is recommended with the units screwing in on top, they have flat and angled sides, the former must face each other. If you’re confused, there’s four lights on the reverse of each and these must face the shooter and target correspondingly.

When correctly powered up and connected, they give the following information: left to right PWR (power), WLAN (Wi-Fi indicator, WAN and LAN (camera indicator) On each base is a 3-positon rocker switch: middle 0 (OFF), right I (internal or AC power) and left II (external 12V DC).

Looking from underneath is the way to tell them apart. Both have a charging jack point and an integral cable to connect with an external power source. The transmitter has a ‘power out’ socket for the camera and a QD phone-type connector block socket for the signal output. It’s recommended that the tripod legs are set as wide as possible for maximum stability and the ground spike driven in to secure it. The camera comes with a flexible arm and large clothes peg-type clamp that clips it to the tripod shaft; from here, you can adjust height and angle for the best position. Bear in mind it will be on/near the line of fire, so a bit of experimentation is required for protection, not only from bullets going down range, but any shrapnel or material blown back.

The App is free and once downloaded tap on it and you will get the first screen, which says: Caldwell Shooting Supplies Target Camera and the word connect. Turn both units on, then press connect on the screen and it should fire up. My usual bad luck with electrics started with a ‘cannot connect to the server’ message. I could not solve it and asked my missus who’s a whizz with this sort of stuff and she (clever clogs) worked out that you must go into phone/tablet Settings, then Wi-Fi and locate the transmitter and receiver units and connect to them. Easy for her to say!

Now on and in, the screen shows several options; as you can drag and pinch to reduce or enlarge (zoom/pan) the image, take still photos (snapshot) or live film (video) plus measure group size and go back (undo). But before this, you need to get the picture right. I found it easier to set up the transmitter and bring the receiver along then view the target on screen up close, then place the camera for the best target image and safest position. Having killed several innocent chrono’s in my time, I am painfully aware of the aspect of equipment in the line of fire! 100 TO 600M?

I started off at 100m and intended to take the camera out to 600 or there about! Image quality is good. You get a crisp view of the target, with holes appearing as if by magic. Two things I noticed; if the camera is not used for a time you get a timed-out message, which is easily reversed by either pressing the arrow (back) icon or equally press disconnect then connect. Stills and video are easily accessed with camera and video camera icons, just tap them and you get the choice of saving or not. A few times I did notice some image lag; I fired, and the expected impact hole did not appear, only to suddenly pop up about 30-seconds later.

Getting a group size was a bit confusing and it took me some time to work out what was going on, as the instruction are brief and vague. Essentially, you select the group size icon (looks like a ruler) then tap the screen to get two points of a known length, this distance is then entered using the keyboard.

Now drop a marker point off the target and drag it onto a bullet hole then repeat for the number of shots, e.g. three being a normal amount. When done, the group size will display lower right on the screen. You need to be precise with the placement of the first two markers.

Once I’d sorted all that out, I took the camera out to 580m, which happened to be the best line of sight distance I could find on the land. Transmitter and receiver alignment, though essential, is not as critical as I thought. Positioning the camera tripod to look at a sign I faced the transmitter to the position I would be going to. Setting up the receiver, I aimed it at the transmitter and it connected right away. To be honest, there was no difference in image quality at any distance, all being easy to see and manipulate on screen. Power-wise, the system gave a minimum of six hours run time on the integral batteries, probably nearer seven, which I thought good enough.

I’m left in two minds about the Caldwell Target Camera; firstly, if your needs are mainly 100m zeroing, then it’s probably not worth the effort, dues to its price, as there are many cost-effective spotting scopes at half that money that will do that job out to 200/300m! Conversely, even a 3-9x40 scope can show you bullet holes and group sizes at 100. Secondly, pushing it out to 600m is a different kettle of fish, as some spotting scopes will struggle with focus and definition, unless they can be kept 100% stable in use, as even the slightest touch will spoil the view.