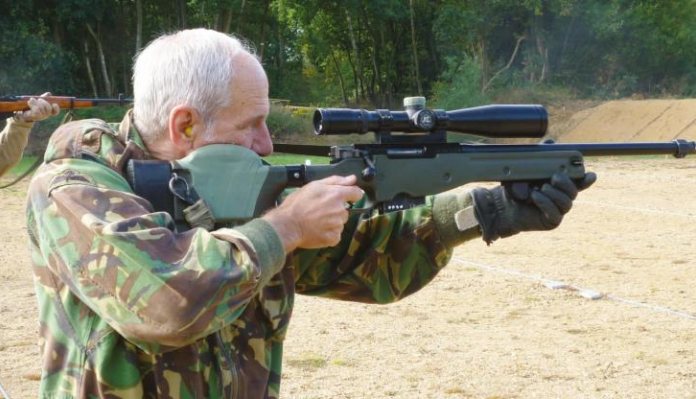 Hopefully, you will now know a bit more about CSR; so, it’s time to look at rifles and accessories. However, it’s worth looking at what to wear and, more importantly, what not to! The league takes place over the winter months (October to April) so, suitable outdoors clothing is essential. I’ve seen people shooting in jeans and lightweight, non-waterproof jackets have a miserable time! However, please don’t turn up dressed from head to toe in military style clothing, looking like you’re about to go into battle! It’s a target sport, and not Afghanistan! The NRA stipulates only one item of camo can be worn, which is fine; so, a surplus jacket with green trousers, for example, is acceptable.

I tend to wear a warm, waterproof camo hunting jacket, along with a pair of blue waterproof and breathable overtrousers. Decent boots are essential, as there are often large puddles on Century Range and, if there’s one in your path on a run-down, you have to run through and not around it. Spending the day with saturated feet isn’t fun at all. Hearing and eye protection should also be worn, and many shooters also wear gloves, but I generally don’t bother, but they’re a good idea in the butts when using hand-held targets, as the wood on their sticks can have splinters. A hat or cap of some kind will also keep you that bit warmer than if you were bare headed

To shoot CSR, you need at least 1 x 10-round magazine but four or five are better, as you can load them prior to shooting and know everything is ready for action. If there are sighting shots, you can load 12 (if they’ll fit) and if not, you just top up the mag after the sighters have been taken. 30-rounders are generally used by AR15 shooters in Service Optic class, as it allows ‘mag resting’. I’m swapping to Practical Optic class next season, for a number of reasons, but I won’t be fitting a bipod, as I now find shooting off a mag is as steady. Where a bipod is employed, 20-round mags are often used and some competitors, those who shoot Lee Enfield military bolt-actions for instance, are obviously stuck with 10-rounders, but 5-round chargers are usually used to fill them on-gun, as was originally intended. All my mags are numbered, and I have all my ammo, both 5.56X45mm and 7.62mm NATO, in stripper clips, as it’s much easier to fill up with a suitable loader, by simply thumbing them in.

Some competitors will have a wind meter to refer to prior to shooting, but most just keep an eye on the range flags that are positioned at 100 yard intervals. You soon get to know how much to allow for given strengths of blow and there’s even a handy ‘M16A2/ AR15 Service Rifle Wind Calculator’ available to help out. It’s a simple device to use and is a bit like a card slide rule that you set to the required range and slide down to the correct line, dependant on the position of the flag. I just have a look at the flags before I shoot, apply a bit of ‘Kentucky Windage’ and off I go! I usually get it right but a sudden gust can be a disaster!

I usually keep my loaded magazines in a set of pouches from Viper Kit, as they are handy for keeping everything together, but in truth they could just be carrried in a gun bag or jacket pocket and used when required. Tactical chest rigs look a bit daft by the way and can easily create the wrong impression. A safety (breech) flag is required to show that the rifle is open and empty, and I carry mine in the butt pouch of my Speedmaster, so it’s always to hand. I generally just use my scope to see sighters and markers after I’ve completed a detail, but at 500 yards on 4x magnification it can sometimes be tricky to see well, so a decent monocular or compact binos are handy and don’t take up too much room.

When it comes to choosing a rifle, I guess anything goes; however, some are more suitable than others! You need something that holds 10 rounds, which generally means a detachable magazine that holds at least ten, although as mentioned before, rifles such as Lee Enfield bolt-actions are generally used with the magazine in place, fed by 5-round stripper clips. If you’re using detachable mags, they are generally affordable, although magazines for my 308 Steyr CISM are around £100! That’s why I’ve only got two!

Consideration should be given to how ergonomic the rifle is and how easy it is to operate. Bullpups, such as UK-legal versions of the Steyr AUG may look cool but are nowhere near as easy to use as an AR of some kind and, if they are seen on the firing point, they will generally have some sort of extended cocking handle. Changing magazines on a pup is not as simple as an AR, but it’s not generally something that needs to be done against the clock, so it’s not such an issue, unless the course of fire requires two magazines of 5-rounds to be used.

On the point of military bolt-actions like the Lee Enfield, do the right thing and enter into the spirt of CSR and compete in Historic class using the issue iron sights. This levels the playing field, as you’re competing in your own class, so makes you feel like you’re not just an ‘also ran’ up against the generic AR15s.

Although AR15 straight-pulls in 223 Rem/5.56x45mm from companies such as Southern Gun Company (SGC), Bradley Arms and Lantac etc. seem to rule the roost, there’s still quite a variety of rifles used in comps. However, the 308 Win/7.62x51mm, civilian version of the British Army’s LMT L129A1 ‘Sharpshooter Rifle’ can be seen from time to time and they shoot very well, even though they ‘only’ have a 16” barrel. Essentially a bigger, manuallyoperated (man-opp) AR in a larger calibre.

It’s important to understand the limitations of a standard man-opp AR-type. Charging is by a rear-mounted T-handle, which was fine on the original semi-auto (gas guns) guns, but as we can’t use them anymore, it proves to be awkward to operate for every shot. It means you tend to break your shooting position as you fight the handle and it’s not that fast either. I’ve use my Sabre Defence carbine a bit for competitions and, although accurate, it’s just not as nice to use against the clock, due to the lack of a side charger. Plus, there’s the very real problem of ‘hard extraction’, which is caused by high internal case pressures. A gas gun generates enough energy to easily extract a fired case from the chamber, a T-handle does not. And trying to clear a stuck case can be problematic, so losing you time on the COF. Plus, it’s more prone to breakage with continuous operation.

I believe it was Bob Clark (SGC) who first offered a practical side cocking modification, which gives a more natural operating position and movement and also provides a lot more effort for primary extraction (unsticking the hot case from the chamber). His guns are ambidextrous by design with a handle on each side. Later the right side one was perfected into a ‘dog leg’ (drop back) style that has set the bar for all man-opp ARs in the UK. Regardless, some Service ammo produces higher pressures, as can reloads, so the trick is to find out what you rifle likes.

Bolt-actions, such as those from Armalon and Accuracy International, are still popular, especially when shot from a bipod in ‘Practical Optic’ class. Here there are few build limitations. For example, a regular competitor uses a Tikka T3x CTR in 308 Win with a short 16.5” barrel, swept back Sterk bolt handle and an adjustable, KRG Bravo chassis system stock. It feeds from AICS magazines, an Ase Utra, QD moderator is fitted, and it all sits on an Accu Tac bipod. The scope is a Primary Arms, GLx4 2.5-10 X 44, with MIL dot reticle. After seeing this setup, I think he’s got it sorted!

So, there you have it; I’ve looked at most aspects of CSR shooting, from what it entails, to getting started and the kit needed. Hopefully, I’ve whetted your appetite and you’d like to have a go. If so, either attend one of the training days or just enter and turn up. Whichever route you take, you’ll enjoy a great day on the range with a fantastic group of shooters from across the UK. If you live a long way from Bisley, don’t despair, as it’s also shot at Diggle Ranges up North.