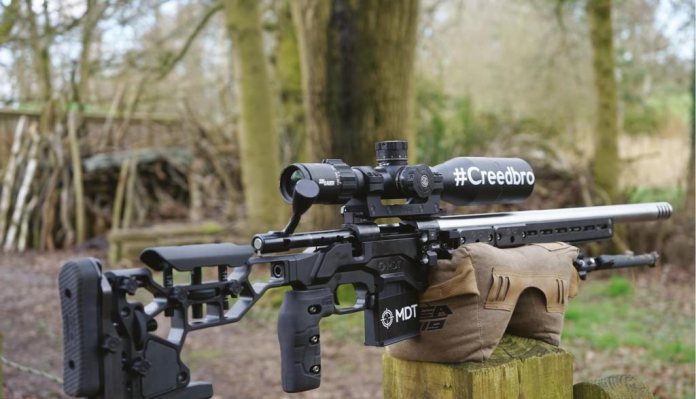 One of the things that I’m looking forward to most about the coming season is seeing the other shooters’ cool new gear and calibre choices. 2020 looks to be the year of the 6mm in the PRL with a variety of specialist cartridges making an appearance. I’m sticking to my trusted 6.5 Creedmoor, as I’m familiar and confident with it and I can’t think of a single time when a new calibre would have turned a miss into a hit. However, I’ll be watching the new 6mm’s performance with a close eye, as the recoil management will be far easier.

So far, one of the most exciting parts of this year was visiting the Brock & Norris workshops, to watch Mike Norris building my new match rifle. He has built almost every rifle I own and has recently started using International Barrel Inc. blanks, which he profiles himself using a CNC lathe. This meant that I could have a super heavyweight straight profile tube fitted, which will help the balance of the rifle when rested on obstacles. I duly asked him to make me the heaviest and most accurate rifle he could on my Howa action.

Mikes’ obsessive attention to detail is always impressive to watch and this was no exception. Every operation on his lathe was dialled in for perfect alignment with the bore, every thread was gauge-checked to ensure perfection and the end result was that every process in building my race gun was performed with absolutely zero runout. To top it all off, he custom made a muzzle brake with a finish so good it looks like it’s part of the barrel!

At the same time, he made me an almost identical (bar the barrel profile) 223 Ackley Improved (AI) training rifle to practice with, which got exactly the same attention and precision. This will help reduce barrel wear on my match gun, reduce the overall cost of practice and will provide me a new calibre to learn. I also think it will be a fun challenge to shoot a match with a 223 at some point in the season! One really useful thing that Mike does is provide a chamber gauge, which allows you to keep track of things like the bullet’s jump to the lands when reloading and throat erosion as the round count increases. In the case of the 223AI, as I plan to mostly shoot long, heavy bullets, it will also allow us to calculate by how much, if at all, the throat needs to be lengthened to suit the heavy for calibre bullets. See: RIFLE SPEC box

A great thing about the first PRL season was that it put UK shooting in the global spotlight and we are getting support from major one kernel of powder in under ten seconds! The increased consistency coupled with increased speed means I’ll spend much less time at the reloading bench and more time shooting!

I now have even more faith that my ammunition will do its job and, as a bonus, it’s much less mentally fatiguing to throw 200 practically identical charges. Along with the Autotrickler V3, I’ve begun using a full-length bushing die; being full-length, I can still ensure that the shoulder is bumped back 0.002” for consistent feeding. However, the key thing is the interchangeable bushings allow precise control over the neck tension of the brass. Though I’m still experimenting, and the results are very good, I’ve still got my regular dies in reserve, if required.

Last season with the money raised from the Precision Pink rifle, I made great friendship with a Royal Marine and this year we’ve been able to build on that. At the 2020 BSS I was able to present a cheque for £800 to the Royal Marines Charity. At the same time, I was pleased to announce on behalf of Highland Outdoors that the newly formed Royal Marines Precision Rifle Team will be receiving our full support.

I’m really excited to be shooting alongside the Marines at PRL events and look forward to helping out at their practice sessions as much as I can. Whilst at the show, it was great to see the excitement building for the new season and talking with lots of visitors who want to come and shoot the PRL for the first time this year. It really helped motivate me and get my head into practicing and preparing with a newfound vigour!

The bulk of my practice has been focussed on building solid positions quickly and making first round hits on small targets – typically no bigger than one MOA. With my rifles running smoothly and accurately, I’ve taken every chance to true my ballistic data and plan to shoot my 6.5 out to 1200 yards either at Bisley or a private facility, to confirm everything is good before Round 1 at Orion. With precision and accuracy being a huge part of doing well, I’ve been keen not to neglect the movement part of the equation.

Dry firing at home, as well as continued gym training, is helping with this part. With all of the rain we’ve had so far in 2020, my most frequent practice space has been at home. There’s a surprising amount of useful props to dry fire on inside a family home, with chairs and step ladders being a favourite. One area of amusement for Mrs C has been my use of the stairs in preparation for the high angles expected on the mountains in round 2 at Valhalla Precision in Scotland!

Prone dry firing is a great way to become familiar with a rifle, as well as reinforcing good trigger technique, it’s an opportunity to practice performing mag changes without looking, as well as shooting with the non-dominant hand (support side), so that it becomes a simple process on the firing line when under pressure. As understanding as Mrs C is, she does insist that I swap the feet on my bipod to clean, non-spiky versions for the sake of the carpets!

With three out of six PRL events sold out for 2020, there’s still time to get involved, head over to www.precisionrifleleague.co.uk for more details.

Favourite thing about shooting precision rifle? You can shoot a bad stage and still finish first on the day, it’s just great fun. The people I’ve met have all been great.

Top tip for someone getting started?

Shoot a round with whatever gear you already have, you’ll learn so much about your shooting on the day. Watching and talking with other shooters is the best way learn, I learned loads from the American shooters who shot the Guardian match in Ireland.