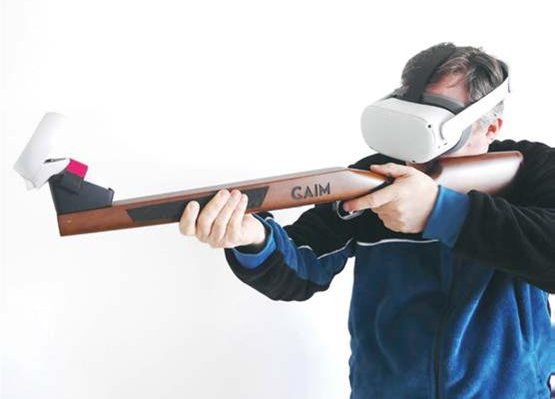 Imagine if you could spend a couple of hours honing your shooting skills, whether at the clay ground, or on a movingtarget range, whenever you wanted and wherever you were. Imagine too that you could apply those skills as readily in the intense atmosphere of a driven hunt, in a wood replete with game, or a marsh thronging with duck. Now imagine you could do all this at zero cost in fees, consumables or transportation. You’ve just imagined GAIM’s Compact VR shooting simulator. Except there’s more, since in this virtual world you can also meet up with your mates for a bit of friendly competition or extend your network of shooting contacts through shared experiences online.

There’s still no substitute for reality, especially in the hunting field with its uniquely rich sensory engagement, unpredictability, and companionship; but what the GAIM Compact system offers in terms of training opportunities and outright fun is nevertheless both genuinely unprecedented and highly rewarding in its own right. It’s important to realise, too, that this is very much the start of something, and that the mere fact that their system is already so immersive and addictive heralds an extraordinary future.

So, if the graphics are a bit cartoonish and the animations a bit wooden right now, that really doesn’t matter, because the underlying physics and ballistics are cutting edge. This shouldn’t surprise us, since GAIM’s parent company is Aimpoint, who know a thing or two about creating practical shooting optics, and training clay shooters and hunters to use them effectively and humanely.

Previous shooting simulators, from laser-based solutions such as Arrow Laser Shot for shotguns and Accurize for rifles, to projection-based systems such as the SimWay and Smokeless Range, all require a significant amount of space on which to project their targets and scenarios. Also, constrained by the width of the surface on which they are projected. VR completely changes these rules, since everything physical takes place within the span of your arms, while your vision and consciousness experience an allencompassing virtual world. Thus, I was able to use GAIM’s system to the full within a space no more than 3m in diameter. If you have used VR before it’s no news, if not, as it was to me, it will be a revelation.

GAIM’s chosen VR platform is the Oculus Quest 2, comprising a standalone headset and one of the two, standard hand-held controllers that come with it. Having taken the lead in consumer VR, Oculus was recently acquired by Facebook, which then bet so big on the future of VR that it even changed its name, and the former Oculus branding, to “Meta”. If Meta has staked its future on the fusion of its own social-media clout and Oculus’ VR technology, then GAIM has surely hitched its product to the right wagon.

In any event, Quest 2 units are available online at competitive prices, although you’ll probably want to equip the basic model with an upgraded harness, such as the Elite strap seen on the test kit, to keep the headset comfortably and securely positioned. Once acquired, the Quest 2 is easy to set up, connect to its smartphone app, and link into your Facebook/Meta account (you’ll need one of these, I’m afraid).

What the GAIM Compact brings to this party is two-fold: a comprehensive software package that provides the training and hunting scenarios; and a hardware element comprising a wooden gun stock and a bespoke trigger unit that connects wirelessly to a Quest controller, mounted via a Velcro strap into a plastic cradle at the tip of the stock.

The stock is a classy item: made by De Robertis in Val Trompia, and fashioned from nicely stained and finished walnut or laminate; embellished with a laser-engraved logo and stippled panels on the pistol grip and forend; and equipped with a black spacer and tan butt-pad. The profile and dimensions are wellthought- out, too, with a sporting rake to the grip, a high comb, and plenty of forend to hold on to.

Together, these features provide almost all the tactile surfaces required to trick your brain into believing in the guns emulated in the software. The most essential element, however, is the trigger unit, whose ribbed metal blade, single-stage pull and crisp break give a degree of realism and control that is crucial to the system’s potential as a training tool: and a far cry from the mushy feel of generalist game-controllers such as the Quest’s.

If I were to redesign the trigger, however, I would add a weight adjustment to bring its 750g (1lb 10oz) pull up to the 2,250g (5lbs) or so, that’s optimal for moving-target work. Additionally, because the unit has to be removed for battery replacement and initial pairing, I would mount it into the stock using a Tikka bottom metal and QD magazine interface rather than the two tiny screws currently used.

That said, the stock is a good weight: at 1,645g (3lb 10oz) and heavy enough to provide a useful amount of inertia. But lighter than an actual shotgun or rifle by a sufficient margin to reduce fatigue during the extended periods of use you will inevitably experience with this addictive system. In this context, there are no words as tempting, or as ill-fated, as “I’ll stop once I get 10 straight”! The balancing point is also right: located just ahead of the trigger guard.

Now for the VR environment. Both the Quest 2 and the GAIM Compact system are easy to set up, the latter thanks to a properly-Swedish Ikeastyle illustrated manual (a textbased manual is also supplied). Once within the GAIM application, the controller image is replaced by a hunting rifle and you are faced with a gallery of scenarios: these include five, training facilities (Sim Pro, Sim Pro Clay Pigeon, Sim Pro Hunting Exam, IPSC, and Time Challenge); and nine hunting environments (Mallard, High Pheasants, Boar, Stag, Moose, Bear, Hunting Lane, Grass Meadow and Hilly Forest).

Before opening any scenarios, however, you should select the settings icon, which will take you into a space in which you can configure the three available guns to fit you perfectly: adjusting the length-of-pull, drop, cast and cant; selecting your master eye; and opting to do with or without an Aimpoint reflex sight, itself adjustable for position and dot size. These set-up options can also be accessed within any of the Pro Sim environments. To appreciate the value of this tool, try using it on the clay layout, but without a red dot. In both real and virtual worlds, poor gun fit matters less with an Aimpoint mounted.

Each of the hunting environments offers a different degree of intensity and a different kind of emotional engagement: from the cool calculation of a boar drive in the snow; to confusion in the face of a torrent of species, genders and ages in the Grass Meadow; to sheer terror in a forest densely-populated by man-eating grizzly bears! Aside from being fun, the true aim is not to kill everything in sight, but rather to keep your head, pick your shots, and make each one commensurate with a clean kill.

To this end, each of the animal models is complete with speciescorrect internal organs, and only a true kill-zone hit will activate the satisfying rag-doll animation that marks a successful shot. Hit anywhere else, and the quarry will run/fly on regardless. Moreover, a data screen appears at the end of each scenario, tallying up the kills, misses and wounding shots. Achieving a tally with none of the last is both difficult and a goal worth striving for.

Additionally, you can replay each scenario, controlling the speed and timeline via virtual sliders, and selecting between three different modes: “Landscape” which creates a kind of out-of-body experience in which you watch a ghostly version of your gun track the game; “Gun”, in which you can observe the path your muzzle took as you acquired and engaged each target; and “Animal”, in which the quarry is centred, and the gun’s track is seen in relation to it, which gives the most detailed view of your lead and point-of-impact.

Even within the hunting scenarios you can receive feedback, displaying the shot pattern as a red miss or a green hit, and seeing the “organ-view” version of the target frozen in time for a couple of seconds after each shot. All this feedback teaches you the correct lead, promotes precise and efficient gun movement, and develops clarity under pressure.

Diving straight into the hunting scenarios, and performing dismally there, sent me back into the Pro Sim environments. Pro Sim itself presents a flat, schematic landscape –in place of the irregular, undulating terrain in the hunting environments- that you can populate with varying numbers of trees and from one to five examples of one of four species of game (mallard, fox, deer, boar). All can be programmed to start a straight run/flight from any or all of eight directions, at four speeds, and multiple distances, all speciesappropriate. This again simplifies the hunting environments, in which quarry appears randomly and changes speed and direction in response to shots. Animals can also be presented as static targets, along with roundels, bottles, and balloons that float slowly upwards for high-angle shots.

In the clay layout, meanwhile, you can programme targets from a selection of nine traps, with a choice of four speeds, three sizes and ten stands, released singly, on-report or as a flush. Analytical tools involve tracking paths behind or in front of the clay to help you pick up the line or measure lead, as well as the ability to replay shots.

Parallel to these activities is an IPSC layout, which replaces the sporting rifle and shotgun used elsewhere with the AR15. This mode isn’t as developed as the Blobworks VR system I reported on from the 2021 Target Shooting Show, but is nonetheless challenging, fun and full of potential. Worth noting is the fact that Quest 2 platform isn’t optimal for the slow, small adjustments associated with precision rifle shooting, so it is important to track positively up or across onto a static target, shooting as your point of aim intersects with the target centre.

Within the loan period I was unable to exhaust the options available in the game or to achieve anything like perfect scores (repeatedly failing the Pro Sim Hunting Exam, for example), but I did accomplish satisfying improvements in my wound-rate, hit-rate, engagementtimes and overall mental clarity; and never once got bored!

The GAIM Compact (stock plus software) costs €490 (£410), whilst an Oculus 2 is about £300. That’s not pennies, but for a system that can instantaneously transform every wet day, dark evening and dull moment into an immersive shooting experience, it is surely a bargain! (Assuming you can wrestle your shiny new VR unit away from the kids!).