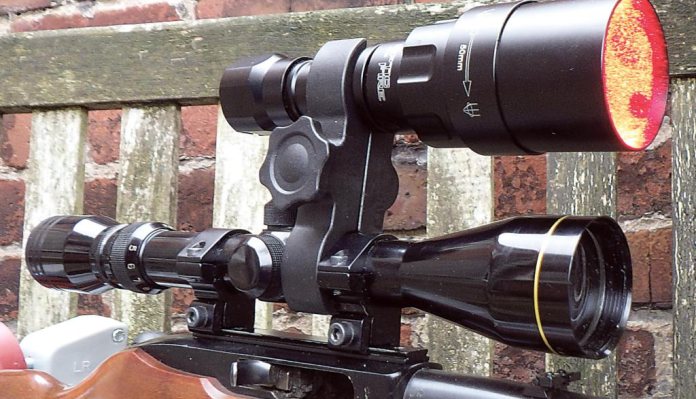 Although I enjoy the occasional night of lamping for rabbits and foxes, I have always done it on a budget.

While regular participants in this type of hunting often spend thousands of pounds on top-notch, night vision equipment, I have never felt my infrequent forays justify such expense. My very first set-up was actually a huge Maglite torch taped to my gun, and it worked very well! So, when I got the opportunity to update my gear, and see what the latest budget lamping gear looked like, I jumped at the chance.

The unit on test is the AG-50 Deluxe Scope Mount Lamping Kit, from Opticfire. This is an amazingly compact unit and shows how technology has really moved on in terms of battery and lamp performance. The kit includes the torch itself, three LED units, (white, green and red), a USB charging cable, a remote pressure switch, a scope mount and a battery. The whole kit comes is a good quality carry case with foam inserts to keep it all safe when not in use. Additional accessories, including an infrared LED and interchangeable torch heads, are available separately.

The torch is a compact unit, very light but very tough. A large shroud at the front end prevents light spill and the associated glare this causes on the rifle barrel and it is simply twisted to alter the zoom. When the torch is set at its tightest zoom, the beam takes on a diamond shape, which is down to the LED itself being square and, with a little bit of fine-tuning, this can be set to complement the cross hairs in the scope, helping centre it on target. The ON/OFF switch is located at the back of the torch and, very cleverly, it glows in the dark. The green glow makes it easy to find and it is a ‘soft’ switch; so, no loud click to alert your quarry. The unit is O-ring sealed to keep things watertight and the body is constructed from aluminium to prevent rusting.

The remote switch connects via the charging port at the rear of the unit and it offers two modes of operation- ON/ OFF, again silent in operation, or pulse, which allows you to press and hold the torch on for a short flash of light. The switch can be attached to the gun wherever suits the user and it fits very well above and to the side of the trigger on the test gun.

The power source is a single li-ion rechargeable battery, about twice the size of a standard AA cell, and this remarkable little battery helps make the torch such a great piece of kit. Being so small and powerful, the battery allows the torch to be very light and compact, yet it powers a huge amount of light, for a considerable duration. Technology has indeed moved on from the six C cell Maglite! The torch will operate for several hours, with the light output only deteriorating in the last few moments of the battery charge. It never ran out of power during a lamping trip and is simply plugged in to recharge via a USB port. It is a ‘clever’ battery, so can be charged as and when you like, without it being damaged.

Fitting the torch to the top of a scope is quick and simple, using the supplied scope mount. When I first saw the mount, I was a bit sceptical, as it looks rather basic, but it turned out to be not only quick and easy to fit, but also very good. The light beam lined up with the line of sight, so the bearing surfaces of the mount, onto both the scope and the torch, must be truly parallel. The tightening wheel did feel a bit small and thin to get a good grip on, particularly when wearing gloves; so, it’s worth fitting it before you go out in the cold.

In use, the kit performed well above initial expectations. The beam of light is very clear and even, illuminating well beyond any reasonable range one might be intending to shoot quarry. According to the website, this lamp can light up a rabbit at 300-yards and, having tested it, I can’t disagree with that assertion. The great advantage of this range is that you can see your backstop and be confident of taking a safe shot in the dark.

With the torch initially set to wide beam, it is easy to seek out those glowing eyes, before zooming the light right down to focus in and identify the target. After using the white LED for a while, switching to the red gave a totally different, but just as effective, level of illumination. The advantage of the red light is that it is far less obtrusive, so can be used without attracting any unwanted attention or spooking any wildlife. The green LED gives a softer, less defined light, again maybe less visible to any potential targets, but in use it did seem a little too soft in my opinion.

Using sub-sonic .22 ammo, the torch stayed in place under recoil, even when I tried some rapid firing, with a ‘rib’ on the torch body, and the mounts on the scope holding it in place and preventing slippage. Switching to supersonic ammo still didn’t cause the torch to move, confirming that the supplied mount is indeed up to the job. Quickly and easily removed from the mount, the unit also makes a great handheld torch for finding your way to and from your lamping locations.

Overall, this is a great piece of kit and is a good choice for anyone looking to try a spot of lamping. It is not an expensive high-tech nightsight, it is simply a very good lamp, with all the accessories that you need, that is easy to use and very effective.