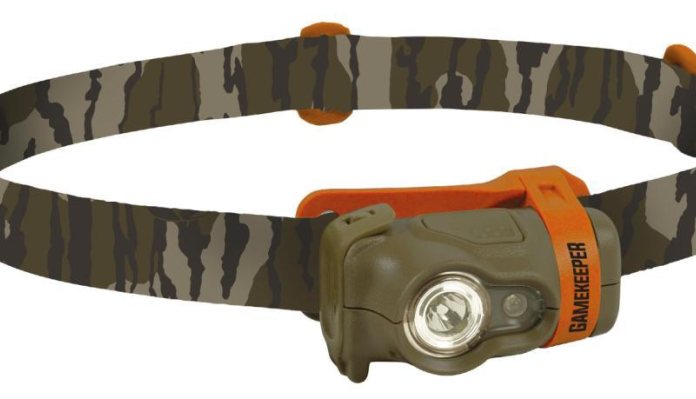 Princeton Tec have partnered with Mossy Oak and released a trio of headlamps; the Byte, Fuel and Sync. The Gamekeeper’s line is a family of American made lighting equipment featuring Mossy Oak’s bottomlands pattern. The lamp head casings of all three LED head torches are olive drab and hunter’s orange while the headbands feature the camouflage pattern. However, it’s not just a case of cosmetics, because the Byte has been upgraded and the Fuel is now only available in this format, plus having some minor modifications so it nicely compliments the other two.

All have strong, IPX4, waterresistant toughened ABS casings, run off the supplied alkaline batteries and feature heavy-duty single strap adjustable elasticated headbands. The front lamp housing and battery casing sit against a back plate, which uses an asymmetrical single arm bracket, enabling the head to be angled down through 90º.

The Byte weighs a mere 64g including batteries, making it the most compact and lightest, but it certainly doesn’t compromise on performance. It gives 100 Lumens on full power with a run time of 58 hours. It is also equipped with a digital battery lockout. It has one Maxbright white LED and one Ultrabright red one, which are controlled by a 3-mode, rubberised pressure switch positioned top centre of the casing. Modes include; the red, low powered white, then high power, followed by all off. The battery life and ranges for the white light are 3 hours/48m, 58/24m and red 63hrs. Its dual-fuel capability allows it to run off the two AAA alkaline or lithium batteries.

The innovative Fuel headlamp remains compact, lightweight and robust, while offering four operating modes. Its rubberised pressure switch scrolls through the modes of full power, medium, low and SOS flashing in that sequential order. It weighs 78g including the three AAA batteries that run its bank of four Ultrabright white LED’s. They produce 70 Lumens, capable of reaching out to 44m on full with a run time of 74 hours. The other beam ranges of 100/40m, 120/24m and strobe 150 hours.

Finally, the Sync, which at 200 Lumens makes it the most powerful. A large twist switch on the side allows you to access all modes, made more versatile due to its skip mode button enabling immediate access to any of them. So, if you require a headlamp with more light settings, dual beam, plus a red LED in Mossy Oak cosmetics, it’s well worth considering.