Top of the Range Head Torch 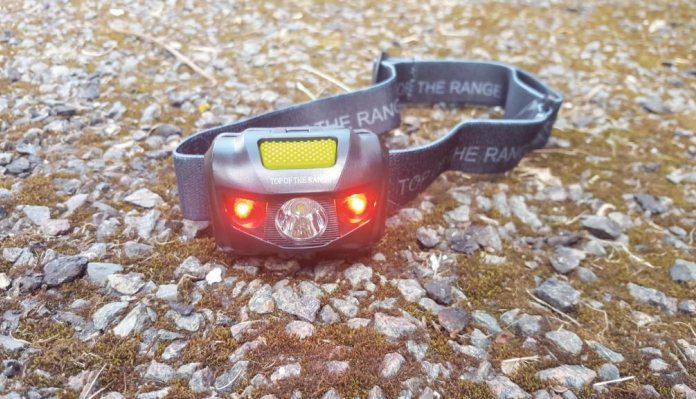 Here we have a head torch from Top of the Range, sitting nicely alongside the huge array of products that they already sell from their website. The head torch itself is very well priced at just £19.99 and does not skimp on features or build quality meaning that it is suitable for military use, cyclists, walkers etc.

It measures 4cm(h) x 6cm(w) x 3cm(d) so is not large but by no means the smallest either. It weighs in at around 3oz including the three AAA batteries used to power it. Features a strong elasticated head band that is fully adjustable to size that would happily accommodate a helmet if required. The main body is attached to the elastic strap by a mount that allows the user to tilt the light to the desired angle.

The head torch has a single powerful white light LED in it centre with a red LED either site. All the LEDs are controlled by a large green rubberised button on top of the housing. Allowing the user to cycle between several modes, the first being red light which is useful when trying to maintain light discipline. The second mode is the low setting for the white light followed by the third which is the high setting with the final mode being a red strobe. The housing does include a rubber insert in the battery compartment to keep water, dirt and moisture out.

Battery life at this time is unknown but having used it for some considerable amount of time I have yet to change the batteries!