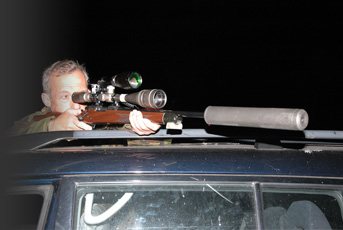 Hunting by night is an art in itself, and a pursuit best undertaken after learning the ropes with experienced shots, who really know what they are doing. Admittedly the human eye is an incredible tool, yet in low light conditions, our on-board optics can play tricks, and all is not always what it seems. When this shortfall in our ability translates into unacceptable wounded targets, it really is time to rethink the approach. Basically, whether rabbit or fox shooting, the requirements are much the same; namely that of accurate shot placement.

With the challenge of night shooting among the most demanding for even the most able of shots, any technological advantage to be gained, is most welcome, and can only help in minimizing the chance of a less than perfectly placed shot.

Conventional ‘Lamping’ has been used as an effective method of vermin control for years, and lasers have played their part too; albeit as fairly inflexible add-ons; yet cumbersome batteries and bulky lamps, have often made the whole procedure rather laboured.

Well all that is possibly set to change with the introduction of what’s termed ‘Laser Diffusers’. Marketed by BSA and manufactured in the USA by a company called Laser Genetics, the ND3 X50 offers an intriguing, if not ground breaking specification, which really does offer the dedicated sportsman an additional tool in their armoury.

Supposedly the most powerful device of its type, the ND3 X50 specifically uses green light, and enables the laser beam itself to be diffused and therefore enlarged. The ND3 is mounted on top of a conventional telescopic sight via a fully adjustable mounting system, which comes supplied.

Setting up the device is fairly simple, requiring the diffuser to be set into the mount rings. Then, by using the two adjustment wheels on the mount (windage and elevation), the laser beam can be moved to fall centrally behind the cross hair.

The beam size can be varied, via the central knurled collar, from 50mm up to 320mm at 1ft away, so obviously can be greatly varied down range, as the cone of light is widened on demand. The tighter the beam, the brighter and more intense the light, and trial and error will determine what works best for given surroundings and distances. A smaller ND3 model has been available for a while now, yet at the time of this review, this larger X50 derivative is yet to be released in the UK. The 50mm diameter objective results in performance apparently 120% brighter than the original model, when viewed at 100yds. Couple that with claimed usability up to 500yds, and we are clearly looking at an intriguing development.

Battery life is 7hours of continuous use, which is impressive in itself, and more than enough for all but the most obsessive of hunting enthusiasts!

Included within the boxed kit is, as stated, that adjustable mounting system which fits 1inch scope tubes, a pressure sensitive switch, Weaver mount and even a tripod mount. Bear in mind that the manufacturers state that the ND3 can be mounted to both binoculars and a tripod, and the uses for this diffuser are clearly many and varied.

A field test was clearly beckoning for this device, and what better than an invite from my old friend Dave Welham of Airmasters 88, who’d been field testing the ND3 for some weeks prior to my visit. Dave’s prowess against foxes makes him a prime candidate to evaluate this product at the sharp end, and since he takes no prisoners in the field against that most wily of adversaries, I knew I could rely upon a frank assessment of down range performance. Basically if this product was going to cut the mustard, it had to survive Welham’s scrutiny where it mattered.

The full kit list for the outing was; Laser Genetics ND3 X50 Laser Diffuser, Burris Signature 8-32x44 scope, Remington 700 .17 calibre rifle and a Jackson Rifles moderator – and last but not least, a fox call from www.foxcalluk.co.uk

Shooting foxes round a golf course set up the perfect backdrop to the action too, and we were soon in place at Dave’s practise ground, to fine check the rifle’s zero, and get the kit in order. An exciting night ensued, and watching the master at work, as we eased the four wheel drive vehicle round the course, hole by hole, was an education as always. An usher to stop the vehicle crawling… steady the aim from the open hatch… crack!… and the first fox of the night was in the bag.

The ND3X50 is fairly simple to set up, with the consensus of opinion being that the laser beam is best adjusted so that it fills the field of view of the scope at the optimum expected target distance. Once this is achieved, centring the light field becomes less critical, with the whole system working well.

In use, it seems that conventional lamps are still a good idea for initial target spotting, then adopt a black-out procedure and switch to the calmer green light of the ND3, once homing in. Being rifle mounted, this ND3 is usable by a lone shooter, after eyes become familiarized, but if shooting as a pair, then one person using a conventional lamp probably makes sense.

The weakest part of the set-up appears to be that adjustable mounting system, and on the test model, despite the mount clamped to full tightness, the fragility of the design meant that the light beam could be too easily moved off target when the gun was nudged or roughly manoeuvred.  Apparently, the manufacturers are aware of this shortcoming, and are working on a resolution as we speak. In the meantime, Dave being Dave, a custom fully locked modification had been engineered… but of course!

Whilst the claimed usable distance of 500yds is largely academic, under our test conditions, this laser diffuser worked brilliantly out to around 250yds, after which the glare of the foxes eyes would seemingly create a wall of light, dazzling the sight path. It should be made clear of course, that under different light conditions, that range may well extend. Again, this is largely academic, since where the majority of practical shots were concerned, this diffuser proved to be a real boon in the field. OK; a spooked fox from an over shot location will run whatever is flashed at it, but in general, this diffused green light seems far more forgiving and less obtrusive where the quarry is concerned; which of course is music to any hunters ears.

The Welham verdict - get that mount sorted, and BSA are clearly onto a winner.

*As a footnote: the use of any laser product can be dangerous if care is not taken. Eyesight can be damaged if lasers are misused and flashed in the face, so this should be born in mind at all times, and attention paid to all product warnings.