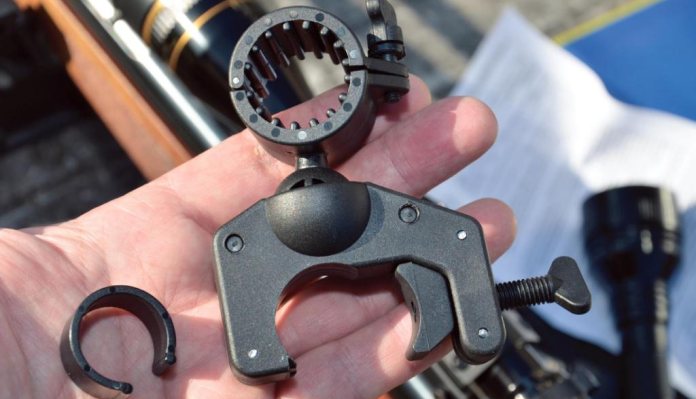 Lamping kit is one area where we can really see a difference, with today’s gun mounted lamps a far cry from those crude arrangements of old. I remember expeditions into the field, where somebody had to hold the power pack, something akin to a car battery in both size and weight, whilst the other person took the shot, free from such encumbering paraphernalia.

Today’s hardware leaves all that behind, and companies such as Cluson Engineering, are at the forefront of the technology, with their popular Clulite range of specialist lamps.

Side by side: what’s in the box

Under the spotlight here, so to speak, are two lamping kits, offering a similar approach, but different specifications for the job.

The Clulite Super Bright LED Gunlight comes supplied in a neat padded box and includes the full kit to get you up and running. There’s the torchlight itself, the gun mounting assembly, rechargeable battery, car charger, mains charger, tail cap switch, and also the remote stock switch. The lamp body is manufactured from aircraft grade aluminium, and is black anodised, giving it a high-quality look and feel. It’s also waterproofed, so fully protected from the elements. The gun mounting assembly is formed from synthetic compound, which helps to reduce weight, yet again feels really well-made.

Opening the smaller box of the Clulite White Eye Gunlight, all the same components are included: the gun mounting assembly, rechargeable battery, mains charger, tail cap switch, and also the remote stock switch, except with this lamp, you don’t get the car charger as standard.

Next, comes some basic preparation, and that means charging the Li-ion 3.7v battery, which comes supplied with both lamps. The Super Bright LED Gunlight takes 4-hours to fully recharge the battery from empty. Just snap the battery into its slot, the red light shows, and then time it for the duration. The charger automatically cuts out when fully charged, but it’s worth noting that the charger light stays lit red and doesn’t change colour throughout the process.

With the White Eye Gunlight, the charger still automatically cuts out when fully charged, this time after 6-hours max from empty; however, this model shows red to charge, and this will change to green when finished.

If you’re waiting for a battery to charge, it makes sense to fix the lamp set in position on the rifle in the meantime. Both lamps come with the identical clamp, as mentioned; so, the process is the same for each. Fix the torch body to the rifle’s scope, using the gun mounted clamp and, if fixing to a one-inch scope tube, first snap the inner plastic ring, which comes supplied, onto the scope tube body, then tighten the jaws of the gun clamp assembly over the ring until finger tight. Now, unscrew the main torch clamping ring, sit the torch in the clamp and re-tighten. When the battery is fully charged, unscrew the rear section of the torch, drop the battery in and screw back in place again. Both kits, as mentioned, include a tail switch, which carries a pressure switch at the rear, but also the option of the remote pressure switch, which also screws into the rear of the lamp. Fancy this option, and you first need to stick the Velcro panel to the gun’s stock. The remote gun switch can then be temporarily stuck to the stock.

The Clulite clamp features an excellent ball joint at the top, and this means that the torch can be angled and maneuvered any which way, adding great flexibility. In practice, you can therefore set the main focus of the beam to be off centre, which means spooking the quarry can be kept to minimum, or set the lamp beam to perfectly coincide with zero. The choice is yours and, with a full 360-degrees rotation possible, both designs are supremely flexible. In fact, I would stick my neck out, and say it has to be the best mounting system I have encountered to date.

Effective range of the Super Bright LED Gunlight is specified at around 175m, and 125m as comfortable shooting range. Obviously, if airgun hunting, quarry distances will be dramatically closer, but having the ability to efficiently scan the vicinity can make a big difference to any evenings chance of success. The White Eye Gunlight has a huge advantage in lumens output on paper, so it’s hardly surprising that its specified effective beam distance comes in much higher than its stable mate here, at 300m!

With both lamps, high and low beam is controlled via the pressure switch, once the lamp is initially switched on. An additional gentle press of the switch toggles between the two levels. Fingertip control is right where you need it. The Super Bright LED gunlight worked a treat, with the beam directional as mentioned. It’s super compact too, which may be important for some. Once I compared the White Eye Gunlight model alongside however, the obvious advantage in super brightness, just won me over. Neither lamp allows for the beam spread to be altered, as with some designs, but they really get a massive thumbs up for ease of use and performance overall.

Optional colour filters are available as a set for the Super Bright LED Gunlight (red, amber, green, blue, and yellow) whilst separate front assemblies can be ordered for the White Eyered, green, an IR LED, or even a 1000-lumen LED assembly.

Hunting with a lamp is still very popular and both the kits gave a good account of themselves on test. Cluson clearly know their stuff in this market and it’s not difficult to see why they have built up such a reputation; both kits here are straight forward, well thought out, and very well made. The Super Bright LED Gunlight is a nice ultra-lightweight option, with plenty of performance, but given the marginal price differential, and the massive increase in performance from the White Eye Gunlight, the slightly heavier model would be an easy choice for me.