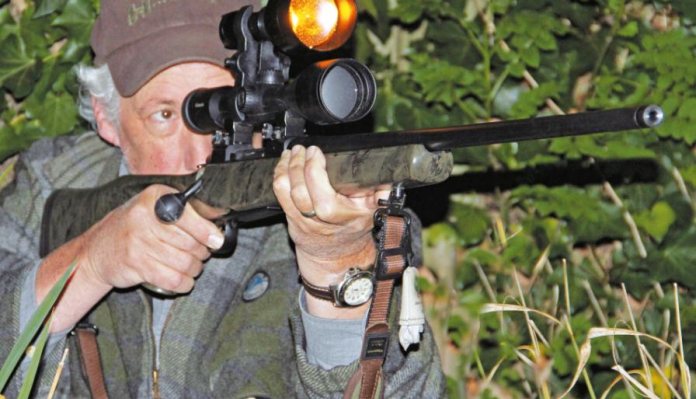 It’s always handy to have a good lamp, even if you own a night vison or thermal sight. Night Master now addresses that common problem of buying or carrying a conventional LED torch, as well as an IR illuminator. Called the Trident lamp, it, as its names suggests, has three illumination options. Red and amber LEDs and an IR 850nm illuminator (white, red and amber option too). Priced at £199.96 for the kit version, it offers good value for money and the Torch alone with charger is £179.95.

It comes in a tough, plastic carry case, which includes the lamp, battery charger and leads, vehicle cigarette adaptor cable, universal, Fig-8 scope clamp and shims. Optional and extra are a remote switch, brightness controls and an adjustable elevation and windage rail. The lamp is large and sturdy, at 8” long and weights 480 grams and is made from black anodised aluminium.

There’s a 2.5” section in the middle that a scope or universal mount can clamp too, that allows it to sit forward or rear of the saddle and turrets. It can be swivelled to left or right if necessary and offers a three year warranty against defects in materials and workmanship. At the back, is a twist-off end cap that holds the dimmer switch and ON/ OFF button, removing this gives access to the single 18650-type battery.

On the front of the body, at the top, is a
small dial that has A, R and IR in white letters on it; for amber, red and infra-red, rotate this to choose your preferred illumination mode. Forward of this is the large 68mm diameter objective lens cover. This rotates in and out about a half inch to focus the beam; rearwards for a wide angle and forward to narrow it down.

The battery charger, with mains or car adaptor, plugs into a 2-cell unit. Charge time is about four hours and can be topped up at any time. Press the ON/OFF button once and the lamp illuminates and to dim or change brightness, all you need to do is rotate the button, which goes from no light to maximum in less than a turn. There is a memory function too; so, when it is turned back on, it returns to the last setting.

The illuminator switch is small, but easy to use and you can feel and hear it click into position for the next function. The focus ring is smooth and handy and allows you to tailor beam width to your shooting range or needs, from foxes in the field, to close up on rats in barns etc. The selector switch for each LED option is good and with the lamp off, you can see the internal carousel rotate and move the next chosen one into position.

Accessories that can be ordered separately and consist of a remote control ON/OFF that replaces the end cap with a cable and pressure pad that attaches to the rifle’s stock, which allows you to maintain your hold in the shooting position. Also, a dimmer end cap to adjust brightness/power output. Then a Weaver adjustable mount. Here you will need a single, Weaver-based ring so you can clamp it to the scope’s body tube. Which allows you to adjust the lamp for elevation and windage position, to centre the beam to the reticle.

I fitted the Trident to a Remington 700 combo package from Raytrade in 243 Win for foxes and a Sako custom 22 rifle for rabbits. It’s a cinch to fit with the universal clamp, as I did not have a Weaver adaptor for the adjustable mount. The universal is tall enough to avoid lens flare at the front or interference with turrets in the middle, plus it can be rotated around the scope to suit.

On the Remy 243, I was walking around the fields after dark to see if we could see any foxes out on the new crops or running up and down the hedgerows. I heard two young males play fighting and at 125 yards I switched the LED to amber and pushed the ON button. This lit them up a treat and I managed to drop one easily. That Amber beam with its adjustable width is really good, as it’s not as disturbing as red LEDs can be and far better than white!

The IR setting was used on a Sako 22 rimfire with ATN’s X Sight fitted. Here, the ability of the Trident to switch between visible and IRs LED is a real advantage; as now I can go stealthy with the IR and this will enhance the detection range of the ATN at night to a max of 300 yards. Or, use it as a normal lamp with visible light. I had three to four rabbits the first night and then another six the next.

To me, it’s a no brainer really, three lamps in one; good for normal duties and then for NV use too. It’s a quality build from a good company at a good price, with a powerful beam in all illumination modes and a real asset to night hunters.