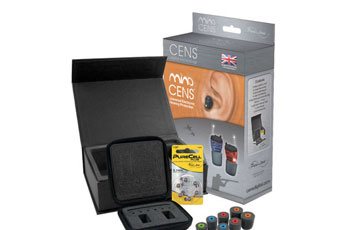 As a shooter using hearing protection is a no-brainer, however as a hunter I never used to bother and if my riﬂe did not have a moddy on - well there you go! The main reason was I do not like to wear ear muffs (even actives) in the ﬁeld as they get in the way. Standard plugs are OK but cut down on your overall awareness be it aural or physical too much that you feel isolated and out of touch. I then found out about a company called PureTone who offer the fully moulded CENS ProFlex Hunter electronic ear defender and I have not looked back since.

The whole of the concave section of the ear and the start of the canal is a custom mould that ﬁts like a glove and to this PureTone ﬁt a small electronic system with a combined ON/OFF and volume switch along with a press button to select two programmes that cater to the background and what sort of shooting you are doing. They are very good and as well as cutting out harmful sounds act like a bionic ear to increase your effective noise pick-up range. Plus they are a ﬂush ﬁt so do not interrupt gun mount etc. The downside – they are not cheap at around £600! OK you pay for what you get and they are a superior and practical design, but what if you can’t afford the outlay?

PureTone have considered this and are now offering a new product called the Mino CENS Universal Electric Hearing Protection. They have also managed to get the price down by 50% too, which includes all the usual accessories. OK still not cheap but the quality and ability is still excellent even when compared to my ProFlex Hunters! Also much better than the more budget-priced units now appearing in terms of ability and also safety.

The ﬁrst economy is doing away with the custom-moulded ear inserts, instead they use a simple foam tip that is compressed before it’s inserted then expands to ﬁll the canal. Given people are different, ﬁve sizes are included to suit I imagine near all diameters. These are colour-coded – green 10.5mm short, blue 10.5mm long, black 12mm short, red 12mm long and orange 14mm long. These push onto a hollow stub at the base of the Mino unit where they are held securely. Spares can also be ordered.

As you can see there is a fair bit of support kit that comes with the Minos including a pair of wax guards and inserters. These as the name suggest stop wax getting inside the mechanism and are screwed into the hollow sound entry tube, again spares can be ordered.

The Minos unit is a bit different to the ProFlex as it looks like a mini, swing-top rubbish bin. They are colour-coded – red right ear and blue left ear and each can be identiﬁed by a unique serial number on the side. On top you will see what looks like a tiny aerial, which is the ‘extraction cord’ for pulling them out, PureTone also offers a lanyard that ﬁts between the insert and the minos so the can be worn around the neck.

Opposite this is a push button volume control that offers three, pre-set levels of adjustment: Level 1 (low) (+5db), Level 2 (medium) (+11db) and Level 3 (high) (+18db). As a default setting Level 1 comes on when you switch on, as you toggle UP/DOWN through them a 1, 2 and 3 beep will sound indicating the level you are at. Power is supplied by a #10a hearing aid battery and unlike the ProFlex there’s no separate ON/OFF switch. Instead you just ﬂip up the cover, slide the cell in (it only ﬁts one way) and as you close it the unit is switched on. Typically the 10a’s are small and ﬁddly and PureTone supplies a cleaning brush with a magnet at the other end that allows easy handling.

WHAT A LOT I GOT

As I have come to expect from PureTone the Minos are comprehensively presented. They come in a hard box with a compact, foam-lined, plastic carry case for safe storage. It has two compartments for the Minos and six battery holders and a slot for the brush/magnet. Also included are the two spare wax guards and insert/removal tools and a pack of six #10a batteries in a rotary dispenser.

Fitting is much easier than my ProFlex Hunters, as you just compress the tip and insert it into the ear as opposed to having to wind it in. When switched on you will hear a tiny melody indicating they are powered up, after that just the beeps as you toggle up the volume.

Testing consisted of my usual selection of noisy guns with my Blaser R8 in 270 Win, a 12-bore semi-auto shotgun and a 375 Ruger big game riﬂe. Out of doors the Minos handled all this easily, reducing the noise to safe levels. However, I would say and this applies to all, plug-in, electronic defenders, on a fully enclosed range a set of muffs over the top will give more protection due to the intensity of the noise inside.

As before the ability to hear well outside your ears normal ability is useful, as range commands and conversation can be heard and carried on even with the Minos in place. For we hunters you can pick up sounds much further out as I have discovered with my ProFlex’s before, which can alert you to the position of your intended quarry.

Overall the Mino CENS are an excellent and a far more cost-effective option that does the job near as well, and though preferring my ProFlex feel they will become far more popular.