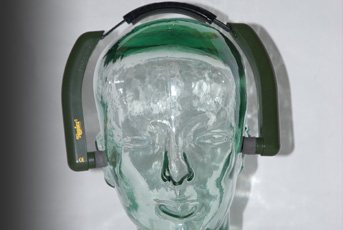 Some time ago Napier launched their PRO 9 ear defenders and you could not have imagined that they would work, but they did. Odder still was the fact that despite the build that made you look a bit like a cyberman they were active by design.

They could not only reduce the harmful noise of gun shots to safe levels, but also allowed you to hear normally too. This until then was the premise of the electrically powered and more expensive designs. But the PRO9s did all this without wires or batteries…

As opposed to a muff-style that covers the ear the PRO series is a plug-in that fills the ear canal. With foam adaptors (cuffs) to make the seal the rest of the unit consists of two, slim, rectangular boxes that sit on the sides of your head (above the ear) and a folding adjustable band.

Using what Napier calls noise cancelling technology the sound boxes are hollow, and in some way reduce the high db output of a gunshot to safe levels as it rattles around inside before being directed into the ear. Likewise they are light and comfortable, and as they don’t cover the whole ear they present no problems for gun mounting. Full muffs can and do offer limitations.

Since the launch of the PRO 9s, which were originally envisioned mainly for shotgunners, Napier has perfected the design into the PRO10, which is more aimed at the fullbore rifle shooter; be they hunter or paper puncher. The 10s are designed to give a lot more protection for this more intense sort of usage.

They do look a bit odd no doubt, but once adjusted properly - which take seconds - they sit on the head and you soon forget they are there. I first tried them for clay shooting and as I said they are amazing. I then moved on to some serious fullbore rifles and they proved equally effective.

For me they represent the best of both worlds in some ways. They offer the quick and easy ON/OFF facility of normal muffs without weight and bulk penalties or a reliance on a lifed, power source. They are near as unobtrusive as ear plugs but a darn sight easier, quicker and comfortable to fit and use. They also fold up small and light (1.7oz all-in) when not required.

To be honest there’s nothing negative about the PRO series of ear defenders as they do it all in a compact package at very cheap money for what they offer. Though of benefit to all disciplines, as a hunter they offer a practical field solution to hearing protection, that little else can touch on size, weight and price!

For: Light, effective and active by design without a power source
Against: Makers you look like a cyberman…
Verdict: An amazing design that really works at no real money