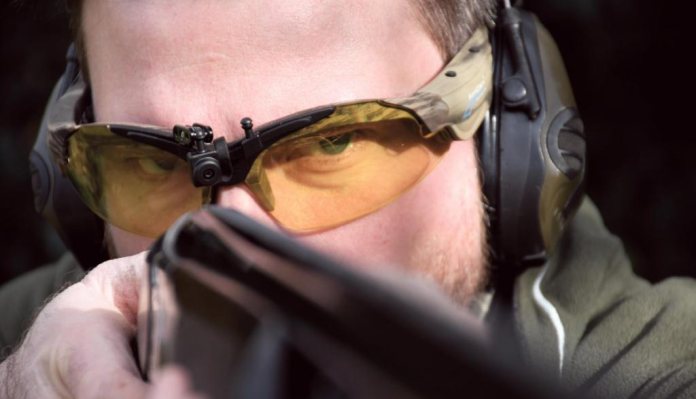 AimCam glasses are a great way to capture the shooter’s perspective of many shooting sports. The latest Pro 2 version updates to the tougher camera, with a Gorilla Glass lens and greater video quality from a state-of-the-art Sony 1080P CMOS sensor. Full HD video running at 30 frames per second will capture the best image quality to record your environment, although if you want more specific slow-motion feedback, the 720 setting records at 60 frames per second for superior high-speed action capture, especially shot strings in the air and clay pigeons breaking. WIFI connectivity lets you live stream your sightline directly to the AimCam APP on IOS or Android mobiles and tablets and this is mandatory when initially setting the camera position to your exact viewing perspective.

Live streaming and connection to my iPhone was good, always connecting reliably, which is a critical factor on kit these days. It’s also helpful for coaching, but you must consider that the picture will not quite be perfectly as the eyeball itself sees it depending on camera position and perspective. There was an expected split-second delay between the two devices, which is common to all WiFi items like this, but video can be controlled from the phone or with two push buttons on the left arm of the glasses. There are two tiny recessed LEDs to indicate power on (red), recording (red flashing) and WiFi (blue). These can be seen in your left eye’s ultimate peripheral vision but not distracting, you must really look toward your upper left corner. The internal battery charges from any USB port and lasts between 1.5- to 2-hours, depending on temperature; and, if connected to your PC, enables downloading of any footage recorded in photo or video mode.

Setup is either left or righthanded with the miniature camera unit sliding along the glasses frame at eyebrow level, with a compound spring ball joint enabling exact positioning vertically and in rotation to align with your specific sightline for the image you want. Seeing the rib is nice but it does need the camera very close in to your eye and depending on how low your head presses into the comb, the physical space to organise the elements may be pushed to the limit. I dip my head quite low onto the comb, with my sightline across the bridge of my nose as my head turns. This means I like large ‘Dennis Taylor’ type glasses, so some users may feel a little too confined with the available space through these relatively ‘shallow’ lenses. Alternatively, set the camera over the left eye (for a right eye shooter) to enjoy the video with less interference, yet a little less exact sight line placement. For more dynamic shooting disciplines, such as airsoft, tactical rimfire or PSG with more fire and movement, do be aware that the camera will generally point and see slightly to your left when your eyes are parallel looking forwards. Real shooting is not unrealistic ‘Call of Duty’ with linear forward perspectives on both movement and gun sights! Aluminium arms holding the camera have small teeth to grip and lock down the camera, this new design also allows for a greater range of movement. The clamshell carry case protects this careful setup from any accidentally forced movement, as well as storing all the other accessories including a tiny Torx key to tighten the double ball joint.

I used the unit when shooting clays, as I thought it was the hardest job to tackle in terms of alignment, visual needs and was pleased to see footage of clays being tracked if not always capturing the broken chips when I did strike. Changing over to 720P would have improved this but it’s amazing to watch yourself shoot, seeing the speed of movement in the gun that you never appreciate when actually shooting. Black or camo frames are supplied with three pairs of high impact interchangeable Z87+/EN166F 2mm thick clear, yellow and black lenses supplied for light conditions. They are 100% UV resistant in rapidly changing conditions. The quicker response and anti-bloom functions of the camera should compensate more quickly for the background illumination. Imagine shooting a rabbit clay against the dark earth before the second of a pair is a high crosser traversing a bright blue sky – that is when you appreciate the faster response automatically controlling brightness of the recorded image. A rabbit bouncing high is a definite challenge though and you really start to realise your own human eyes are so good with response speed you never realised was so quick.

The overall size of the frame has been reduced and the nose bridge has been reduced in size, allowing for a better field of view when aiming but the simple fact is the closer the camera is to your exact line of sight, the more it invades your precious field of view. When set up for a view down the rib, you are likely to realise there are ‘dead spots’ in your field of view when you first see and track targets, before you even mount the gun, and that is why I preferred to keep the unit high on the frame and more forward. The lens’ field of view is broad without any fish eye effect and a few hours of playing around with the setup gives you a great compromise to see and choose personal preferences. Having a friend to view in real time on your Wi-Fi device is great and you can quickly download complete videos to the phone.

What’s in the kit?

This package kit includes a coiled cable to attach the backup ‘Reloaded’ battery, offering up to 5-hours extra run time. A 32GB class 10 SanDisk micro SD card is supplied that will store up to 320-minutes of footage automatically divided into 10-minute segments. Extra cards are not expensive and easy to swap on the underside slot in the left arm. Sound recording is pretty good and captures backgrounds well, but the voice of the actual wearer can be quite loud from such proximity to the microphone.

Starting and stopping the video or taking still photos is merely a short button press away.

The weight is unnoticeable at about 80g, but the downside is the bulky arms do force conventional ear defenders away from your head, breaking the seal needed for full hearing protection. Depth of field is very deep, showing from about 25cm to infinity in focus, with enough definition to see small objects like mini clays high in flight if they are sufficiently contrasting with their background. Although described as HD, (something I find somewhat vague with any product), you don’t get a video output that will benefit most from modern display screens and as a total side matter, mounted centrally looking forwards, the AimCam glasses are fantastic for instructional videos and procedures where seeing what is being done real time and from a central perspective pays dividends!

I think the AimCam Pro 2 glasses are a great bit of kit at a good price but be aware that they have a few limitations in terms of physical size and camera position in your field of view, which is more noticeable for shotgunners.