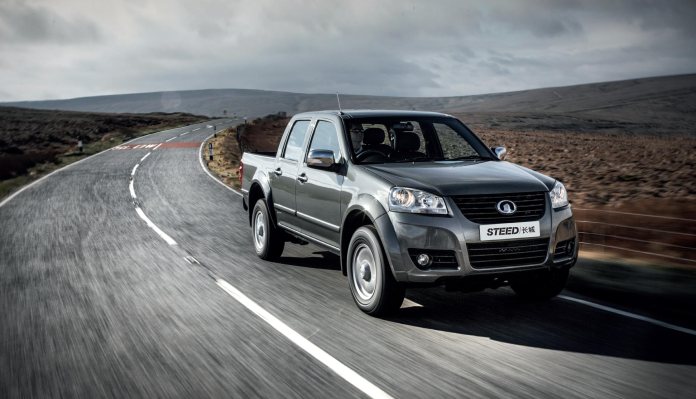 Since launching in the UK three years ago, Great Wall Motor’s Steed pick-up has gone from strength to strength. Fast forward to 2015 and the multi-awardwinning 4x4 truck has become an established name in rural communities and carved out a place for itself as a reliable workhorse.

“In 2015 Great Wall is starting to become as well known as the other six major pick-up brands in the UK among its target audiences,” comments Great Wall’s Managing Director Paul Hegarty, adding: “When we first launched we had a mountain to climb. Not only were we launching a completely unknown brand into the UK, but it was also the first vehicle here from a Chinese manufacturer. In the first year of trading, Great Wall achieved 4 per cent market share. Considering we only have one product – a double cab manual pick-up – we were extremely pleased with this result. Other pick-up brands offer single and extended cab versions as well as automatic gear box variants so they have a greater reach.”

Last year an updated version of the truck was introduced, with 30 major improvements. The new design retains its chunky looks, amplified by muscular wheel-arches and high ground clearance. But now with a slightly sleeker profile with the side indicators incorporated into the door mirrors instead of the front wing. Its free-spinning 2.0 litre diesel engine is now certified to comply with Euro 5 emission regulations. The Steed is now certified in the UK to tow 2.5 tonnes with a ‘braked’ trailer. This increase from 2.0 tonnes followed independent tests at the Millbrook Proving Ground in 2013 where it was put through stringent tests by an independent team of engineers and consultants. Subsequently resulting in the Steed being fully validated by the Vehicle and Operator Services Agency (VOSA).

Inside the new Steed is where some of the more significant improvements are to be found. Higher quality materials, such as that used on the seat facings and a sharper, more contemporary design of instrument cluster, creates a more comfortable and ergonomic feel to the cabin. New technologies have been added to improve convenience, including a multi-function rear view mirror with automatic dimming and an outside temperature display. A tyre pressure monitoring system is also incorporated as well as an outside temperature gauge. The noise, vibration and harshness of the engine have also been significantly improved, giving a much smoother ride.

So does this mean there has been a big hike in the price? The CVOTR price has increased by just £1,000. The basic S model is now £14,998, the SE model is £15,998 and the Tracker version is £16,998. “This price increase is in line with inflation, and does not reflect all the added extras that are now on the vehicle, making it even better value,” explains Paul, adding: The insurance grouping has increased from 7A to 8A, but this is still the lowest of any pick-up on sale in the UK.”

Great Wall is so confident about the new Steed that they have doubled the warranty. When the vehicle first launched, it carried a 3 year/60,000 mile warranty, it now carries a 6 year/125,000 mile warranty – the most generous cover of any pick-up on sale in the UK.

One area the British public was concerned about was the residual value of the Steed. “When a brand new vehicle enters a territory it can be difficult to predict how a used version will sell, but we were quietly confident with the Steed, reveals Paul, adding: The first one to sell was just 6 months old, and it sold at auction for just £1,500 less than its CVOTR price. The used car market in the UK is five times the size of the new car market, so it was important for us that the Steed could compete with other used pick-ups. The reality turned out to be very different to what people feared.”

So what challenges have there been over the past three years? “We’ve had some stock issues, due to the strong demand, admits Paul, adding: and of course we are working with a new partner in Great Wall who are still learning about the European market which is one of the most demanding. However on 13 February, 400 vehicles left China on a ship and are due to arrive here imminently, so we should be able to wave goodbye to low stock issues.”

We are still growing our network. Great Wall currently has 55 dealers, which will increase to 75 by 2018.” When the brand first launched, Great Wall was inundated by more than 350 garages wanting to become dealers. “We decided to go against the usual way of selection– size of showroom and net worth and asked prospective garages whether or not they could adhere to the Great Wall Promise – a six-point customer service plan, which has worked wonders for the brand.”

So it looks like the Great Wall Steed has been fully embraced by the British countryside. After overcoming initial skepticism, it seems the canny hunting, shooting and fishing fraternity have adopted the Chinese workhorse and it is here to stay.