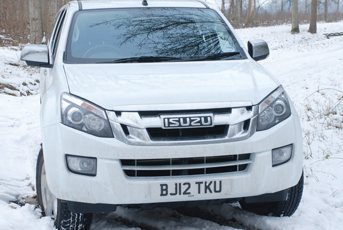 I don’t get to test many 4x4s, but just like with guns I know a good thing when I see it, and the new Isuzu D-MAX Yukon is a keeper. It might be the colour of my tester, which was white, but it comes off as big, not US truck big, but seemingly larger than a lot of other Japanese crew cabs in its class. This is particularly obvious in the 6 x 5 ft load bay. The wheel base is 10.15 ft with a total length of 17.37 ft, and weighing in at3000 Kg.

Power comes from a 2.5 litre (2499 CC) turbo diesel engine with intercooler and catalytic converter that drives through a 6-speed manual gearbox, with selectable 2, 4-wheel and 4 LOW drive. The four door cab impresses as the rear section offers reasonable leg room, unlike some where you are really cramped in the back. Typically the driver’s position is generous and comfortable and speaking as a Land Rover driver I found it positively luxurious.

Discussing the D-MAX with a friend of mine he described it as ‘driving your living room’ as all the creature comforts are there. Good seats, air con, radio (6-speakers) and take off for an android-type phone or similar, along with masses of storage, with a double dashboard cubby on the left along with cup holders and a central stowage box with lid etc. Seats are cloth and velour and the steering wheel leather-covered.

Controls are sensibly positioned with the gear stick well forward and the 2/4-wheel selector a rotary knob sitting on the tunnel with your hand falling naturally to it as required. The default drive position is 2-wheel, with selection just a twist away and an indicator showing the mode chosen on the display. Equally well placed are the heating controls taking the form of two dials below the radio. The steering wheel also has quick touch controls for selecting phone or radio volume etc. The driver’s side door holds all four electric window controls and central locking. Individual switches are also located in the three other doors. A nice touch is the ability to automatically bring the mirrors in, which deploy as you start up.

Familiarising myself with the Yukon took literally minutes and once done it was like putting on a pair of comfortable boots. After about 10 minutes driving I felt easy and comfortable with the truck. I say this as some other 4x4s I have tested have never quite given that smooth and confident feeling. Instead it’s more like riding a particularly awkward horse where you should never let up on concentration and control!

Visually the Yukon follows what I perhaps ungenerously call the generic jelly mould shape of all modern 4x4s of this type. However, it’s not as exaggerated as some, like the new-style Mitsubishi L200s for example, so is easier on the eye. Looking at the front the truck looks like it’s smiling as the chrome highlights give the impression of a face; or is it just me?

Lines are smooth and I did find the bonnet profile a bit awkward to shoot over as it curves away quite dramatically. Other good features are the running boards as standard, which can be useful if you need more elevation for a shot over the roof (it’s a fox shooting thing)! The vehicle came with a colour-matched top for the lined (plastic load liner) cargo bay, with smoked side and rear windows.

This does restrict rear vision but is necessary as a security measure as it reduces the chance of people seeing what’s inside. On that point access is by a fold-down tail gate with the basic rear window plate hinging up (both manual locking). The latter is perhaps the weakest point of any crew cab and there’s not a lot you can do about it, as you are in fact buying a hybrid, off road truck/estate car. There’s a decent bumper at the rear, which is wide enough to step on, but surprisingly no tow hitch was fitted, which I assume is an optional extra.

This simplistic rear window does not have a wiper or washer, which allows the build up of water, mud etc, and along with the smoked glass makes for restricted rear vision. The greater length of the vehicle also made parking/reversing difficult until I understood how much I had to deal with. In a standard bay at Tescos the D-MAX sticks out a lot more than your average car!

Cargo capacity in the back is awesome and it swallowed up all my shooting and testing gear with plenty of room to spare. This will be a massive boon for carrying all sorts of items and you could pack a lot of deer in the back too! Cab-wise you can seat 5-people in comfort and egress from the rear doors is pretty good too.

The Yukon offers a 69-litre fuel tank and average consumption is 38.2 MPG. An expensive tank to fill up (aren’t they all) but I got approx 450-miles in total of both motorway and urban use. Cruising is where the 6th gear really comes in as at 60 MPH you are doing just 1500 RPM. Typical of a crew cab the rear suspension is leaf springs, however these are built for work and not the school run! The ride is smooth and comfortable over all terrain. Towing weight with a trailer is 3000 Kg (braked) and 750 Kg (un-braked).

The Yukon came fitted with standard road tyres on 17” mag alloy rims, OK not ideal for us huntin’/shootin’ types but for many all that’s required. Testing was done in the snow we recently had, my old Landy has BF Goodrich mud terrains fitted and will go anywhere, so I was a little worried about getting the D-MAX bogged in! I decided to restrict its use to tracks and known ground on the farm I shoot over. Ground clearance with standard rubber is 8.85”.

In 2-wheel drive the lack of deep/knobbly rubber was instantly apparent with the Yukon struggling on even the slightest muddy incline. However, in 4-wheel high ratio it was a different story and as long as ground appreciation was observed then it could pretty much go anywhere; I never needed low either! Sure-footed and agile would be a good description of performance off road! However, if this were my truck then a set of mud terrains would be my first purchase for the winter time, leaving the road tyres for the better weather.

To date this is the best 4x4 crew cab I have driven and there’s nothing I could really point at and say that’s really bad. My only niggles are the lack of rear vision combined with the lack of security in the cargo bay, but this is what you have to accept when getting a crew cab. However, in terms of passenger comfort and load carrying capacity it offers the best of both worlds. If I had the money I would not hesitate, but not in white!