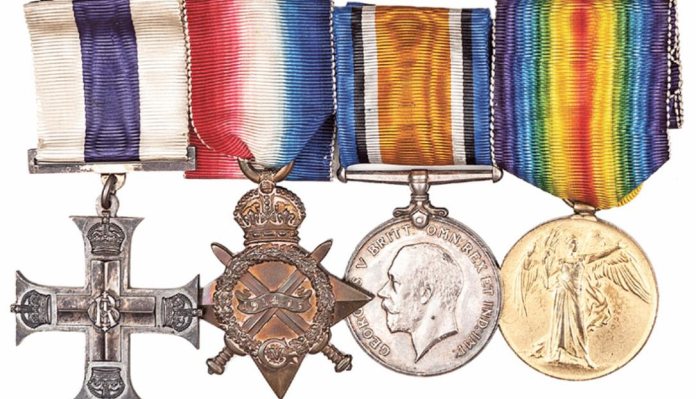 Traditionally, very few auctioneers hold sales during the first half of January, and in the past many people believed that prices were poor during this month. However, Wallis & Wallis have always held an auction and each time it was a great success, and this sale proved to be no different with prices in most areas exceeding expectations. The room was full and, as with our other recent sales, this one saw high prices being paid by both trade and collector, again showing that, despite many areas of the antique market remaining poor, this subject remains incredibly strong.

The last 12 months has seen a dramatic increase in the use of live internet bidding using such services as the-saleroom. com a service provided by The Antiques Trade Gazette. Many internet bidders were successful in buying lots at this sale without the need to attend the auction in person. The auction was varied in its contents, but we start as usual with a selection of medals.

A group of four: Military Cross George V issue (un-named as issued, in case), 1914-15 star, (3409 Sgt C B Kensington 1st Co of Lond Yeo), British War Medal and Victory Medal (Lieut C B Kensington), together with the relevant miniature group sold for £770. The MC case lid was detached but present and the group was in GVF conditions.
Next a Boer War bronze Tribute Medal for the London suburb of Hammersmith. The obverse reads ‘Hammersmith is Grateful & Proud of You’ engraved within a struck laurel wreath, the reverse plain. The ribbon bore a pin back brooch bar picked out with silver ‘South Africa’. The edge was engraved ‘Pte F.G. Haynes’ (Note: Probably Pte F.G. Haynes of the City Imperial Volunteers who was entitled to the QSA bearing the clasps CC, OFS). It was in VF condition and held in its presentation case. It went for £3700.

Now we move to badges and plates starting with this rare brass cap badge of the Long Range Desert Group. This belonged to Private J Bishop of The Buffs and LRDG, who served in North Africa and the Adriatic and later with The Gloucestershire Regiment in Korea. It made £1150.

A pre-1856 officer’s gilt and silver-plated Lance Cap Plate of the 17th Lancers, bearing Royal Arms and motto above skull and crossbones with scroll below ‘Or Glory’ went to a Commission Bidder for £750 (it was consigned from outside of the EU so VAT at a reduced rate of 5% was added to the combined hammer and premium making the total price paid just under £1000). (Note: This lot comes with notes stating that the plate was given to Trumpet Major Tom Romans BEM, senior NCO in the regimental band. On leaving the army he bought a Public House in London called ‘The Royal Tournament’. This plate became part of the regimental regalia in the pub. When Romans became unwell it was purchased by P. Skinner, Chairman of the Regimental Band Association 17/21st Lancers and sold to the present vendor).

Next, an officer’s gilt and silver-plated Lance Cap Plate, circa 1900, of 21st (Empress of India’s) Lancers with crowned crossed lances, ‘VRI’ to the centre within regimental title and honour ‘Khartoum’ below. It was in very good condition and the hammer fell at £600 to the previous bidder.

Of great interest was a wellconstructed wooden model of an 18th century hundred gun, first rate Ship of the Line, based on HMS Victory, 40-inches long and 28½-inches high from the keel. It was welldetailed with ship’s boats, deck cannon, cannon barrels protruding from open gun ports, anchors, and intricate standing rigging including shrouds, blocks, crows nests etc.

It was in reasonable condition having been completely re-rigged in 2004, and was accompanied by a detailed résumé of work carried out and time spent, adding up to 100 hours. It was bought by a bidder from the United States for £650.

Next a well-made North American Indian soft hide gun slip, probably for a Winchester rifle, 39-inches long, with broad fringe down the lower side, and decorated with panels of coloured beadwork. It was a very desirable object and went for £700.

Here we show a good Third Reich SA dagger, the blade etched with RZM mark over ‘M7/68 1941’, the hilt with late type plated mounts, in its painted sheath. There was some crazing to the sheath paint and the locket was scratched, but otherwise it was in good condition and sold for £330.

Now we come to swords starting with this 1796 pattern light cavalry officer’s sword. The broad, curved, shallow fullered blade 32½-inches long, etched with crowned GR cypher, trophy, urn and floral flourishes, with traces of gilt at the forte, steel stirrup hilt with langets, facetted knucklebow pommel and backstrap with ears, the wirebound grip was in poor condition, in its steel scabbard with two rings. It was in reasonable condition considering its age and sold for £420 to an internet bidder. An early 18th century Highland broadsword, blade 31½-inches long, with twin central fullers marked ‘x Clemens x Brach x’ in each fuller on one side and ‘xx In x Solingen xx’ on the other. It had an iron basket guard, the five panels pierced with hearts and circles, with some line engraving, prominent rolled ‘T’ shaped quillon, domed pommel and ivory grip, in its brown leather covered scabbard. It sold for £1100. A 19th century Omani Arab sword kattara, the broad double edged blade, 32-inches long, with rounded tip and three short fullers at the forte, tapering cord bound wooden grip incorporating silver wirework zig-zag panels, slightly swollen square section iron pommel pierced for wrist strap, in its worn panelled leather covered scabbard. The hammer fell at £500.

Finally in this report was a five shot 80 bore Adams Model 1851 self-cocking percussion revolver. The 5½-inch barrel engraved ‘Deane Adams & Deane, 30 King William St, London Bridge’ (indistinct), London proved, the frame engraved with scrolls and ‘Adams’ Patent No 14031R’, the cylinder also engraved ‘No 14031R’. It had an Adams Patent rammer, Beaumont Adams type safety bolt, and chequered walnut butt. In good working order, it had been lightly pitted and cleaned and was in a modern mahogany box with reproduction copper flask and a tin containing percussion caps. It sold for £510.