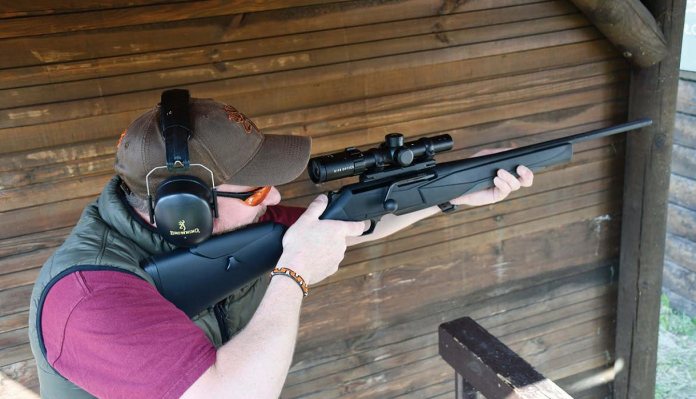 May 2018 saw me invited to a Browning press event near Krakow in Poland, to see and shoot some of their latest kit. The team from Browning were keen to combine work with some fun, so all shooting activities, that were running pretty much non-stop during daylight, were interspersed with 3x one hour long technical product presentations. They were forum style discussions to engage our knowledge of home markets, their activities, needs and wish lists. But, first on my list of activities was a trip down to the 10-metre pistol range to try the Colt 1911-styled (John Moses Browning’s patent) Brownings in 22 rimfire, and 380 Auto. As an activity, rare to find to UK residents, I was keen to have a go. Functionality was superb, but I was really surprised to see the legendary Hi-Power is no longer made. We were invited to an indoor tactical training facility, using Glock 17s; seemingly sacrilegious at a Browning event!

It was great fun though, tooled up with spare magazines loaded with 9mm FMJ for the pistols and frangible ammo for Winchester, 12-gauge SXP pump-action. Firing slug to open a door was also an amusing event before kicking it down and bursting inside to fire more rounds into the hooded target within. With the air temperature at 30° and wearing full body armour, it was hot work, but this is one the Airsoft guys would have swapped their grannies for! After the initial fun, we sat down to a briefing about clothing and how Browning are keen to define the balance between price and functionality.

I was impressed by how they squeezed technical detail into the presentation without making anything onerous and testing abrasion-resistance of clothing fabrics from Cordura to Kevlar with a stainless-steel bristle brush was extremely visual. Realistic displays of showerproof versus full water resistance were interesting, with greater detail on how pressure on areas like knees and elbows will force water into fabrics and through them. Camouflage is always a hot topic, with lighter coloured digital patterns high on Browning’s agenda. The ATACS AU patterns look far too light when you first see them. But it’s clear how distance seems to dull the tones and items fade more easily into backgrounds and foliage, unlike darker patterns.

Back on the range, we were able to shoot the latest, composite (synthetic) incarnations of the Maral – the Nordic HC and brown HC. I’m quite a fan, and both versions have seen reviews already in the UK, but this was my first chance to try them on movers with traversing, wild boar targets zipping across the 50m range. It’s as fast as it is claimed to be and has a large magazine capacity, combined with excellent ergonomics. So, no need to lift your head to cycle the bolt or displace the butt pad from your shoulder; it’s a strong contender for this market.

Even more so at the lower prices now made possible by fantastic plastic, which I think makes the gun look more modern and up to date, rather than the older two-piece wooden assembly bracketing the action. We also shot the BAR (Browning Automatic Rifle) which is essentially a semi auto rifle from which the Maral is partially derived. Not UK legal, but from a technical standpoint, although fast, that reciprocating bolt does alter the recoil characteristics of the gun and speed is not everything!

Returning to the camouflage theme, there’s the X-Bolt A-TACS AU Kite Cerakote combo. I regard it to be one of the finest modern sporting rifles with slick operation, great looks and lightweight. Now combined with a similar brown tan Kite scope for a homogenous camouflaged look, it should sell well! It looks modern and up to date and I think skirts the fine line between functional and modern, without looking too OTT. Just add a moderator and you are out onto your territory for use on deer and foxes.

A similar looking BAR combo was also shown, but not for the UK! The next briefing involved discussion over Browning’s marketing strategies and desire to sell more X-Bolts into the UK and why they think it competes, and beats the Tikka T3x, which is seemingly the benchmark to beat. With its short throw, 3-lug bolt, tang safety and hand-bedded stock, it will retain accuracy in the field no matter what. It’s a fundamentally sound rifle and I like seeing it very gently evolved rather than torn apart and re-started time after time, the Super Feather trigger is a good example of the improvements made with little fanfare. Perhaps Browning, and Winchester are a little too modest when it comes to their rifle range and unfairly seen just as Shotgun producers?

Kite optics have new 8x56 HD binoculars and an HBR reticle in their scopes for 2018. The binos are a generic specification suited to low light use, priced at £560. The HBR reticle fitted inside the 2.5-15x56 KSP riflescope is an approximate rangefinding system based on Roe deer. To be honest, it is not a new concept and, in an age, where laser rangefinders, some incorporated into binoculars are so common, it doesn’t really seem ground-breaking and it can only be a matter of time until Kite pick up on the latest mechanical adjustability options that even the ‘old guard’ of European sporting optics manufacturers have propagated.

Next year ‘long range’ turrets? In fact, I have used and tested Kite optics out beyond 850 metres and dialled the standard units aggressively throughout a week of multi distance shooting; the mechanics they produce now seem robust, so let’s look forwards. Shotgun-wise, we saw the special edition of the Winchester SX4, which honours Raniero Testa’s world record. He shot 13 clays launched by hand in 1.6 second with 13 different shotshells, so Winchester say it’s the fastest semi-auto on the market. The SX4, although loaded up with ten shells was quite heavy, it cycled anything we fed it and remained a very active sporty gun, never feeling sluggish if loaded with fewer. On a different note, I was taken by the deft handling of the B525 Game One Light in 20-bore. I shot it most of the day with 28-gram cartridges, yet came to appreciate its deceptively effective recoil absorbance from the lighter gun with alloy framed action. The 20mm Inflex recoil pad was fast to mount without snagging but after 250 cartridges through sporting layouts, never raised so much as a welt on my shoulder.

After this, the Ultra XS Pro adjustable felt quite sluggish in comparison, but a few boxes of shells soon had me back into the slower, controlled deliberation of shooting rhythm for serious clay breaking, rather than lightweight snap shots from a game gun. Camo A-TACS AU patterning has now been added to the Maxus semi-auto, perhaps more a US market favourite than the more waterfowl- specific patterns liked for camo-dipped wildfowling guns in the UK, but still an attractive design. Its slender forend blends well into the sleek lines, so often betrayed on other semis with bulky forends looking far too bulbous. Polish Trap Champion and Browning Sponsored shooter Piotr Kowalczyk joined us, to introduce the features he appreciates on his new B725 Pro Trap High Rib shotgun with adjustable comb and balance weight system.

Weights paired in two locations, butt and joining rib, you can adjust overall weight as well as fore aft balance, to tailor the gun to long tested personal preferences. Combined with a mechanical trigger that will release the shot on the second barrel regardless of the first barrel’s outcome, guarantees its competitive reliability. I like the lower profile of the 725 action, which gives it a less fat waisted look. From a mechanical view, the Interchangeable DS chokes show innovative patented sprung gas thread seals into the back bored Vector Pro barrels, to prevent any fouling being forced back and jamming up the threads.

Browning is launching a range of centrefire hunting ammo; the BXC and BXR offer separate expansion characteristics for your chosen game. The BXR (hollow-point, matrix tip) is done for medium game and guarantees a fast expansion. The BXC (bonded bullet, boat tail, terminal tip) is especially designed for heavier animals with controlled expansion for deeper penetration, and hopefully an exit wound leaving a good blood trail. I was most surprised to see the Cuboid steel shot in the ‘Blind Side’ non-toxic shotgun cartridges tested similarly. This build allows the less dense steel alloy shot to be more densely packed, for optimum shot sizes and powder space.

At the terminal end of the equation, the gelatine blocks showed how the penetration shows disruption, with spherical steel pellets progressing linearly into the media, whereas the cubes with radiused corners almost capitate, producing more disruption with a broader wound channel along their path. Non-toxic shot is a major factor of our future, so it’s great to see some serious ‘outside the box thinking’, although I’d like to see the results in the flesh, literally, as well as on a pattern plates from my own gun before taking on the next duck flight.

After two days, ten of us had shot more than 18,000 rounds of ammunition without any technical issues either optical, mechanical or chemical, so the flight home was a welcome break from a fun filled but significantly noisy event. Catalogues of popular and almost obscure products were pushed into our hands with invitations to ask for what we needed and what could be placed in front of the public eye; so, look out for what else is new from Browning and Winchester in guns, ammunition and accessories