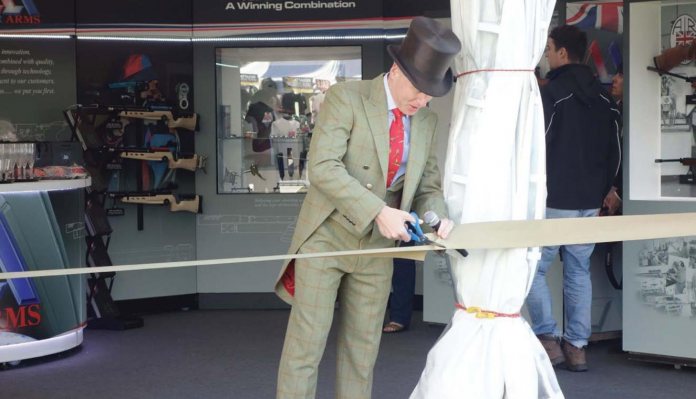 My annual pilgrimage to Weston Park near Telford seems to come around quicker each year, so I really must be getting old! Although there seem to be fewer gun companies in attendance these days, probably due to the huge number of game fairs and shooting shows there are these days (not that I’m moaning of course, we’ve never had it so good) but there are always new items to keep me interested. It was also good to meet up with so many familiar faces and share a drink or two and a bowl of chilli. It was also great to meet up with Racknload himself, a contributor to Shooting Sports and Gun Mart magazines. So, without further ado, here are my highlights.

Claire West and the team have certainly been busy this year, not only have they got the Galahad ‘Sport Pup’ into full production, they also had a brand new show stand to reveal! Ian Harford from Countryman Fairs (who put on the Midland along with various other gams fairs) was there to cut the ribbon and declare the stand open. The new-look display stands are really nice and not only show off the company’s current models but there are also examples of the air rifles that built their reputation over the last three decades. It was great to be able to see so many old classics, such as NJR and RN10 FT rifles, as well as early sidelever spring guns, such as the Jackal and Carmargue.

The real highlight however was the limited edition PCP called the RNS70 that was built to celebrate the life of Air Arms founder Bob Sinclair Nicholls (Claire’s father). Bob would have been 70 this year but sadly died in 2011; he loved his Bentley Continental GTC and the rifle’s stock is the same colour as Bob’s car and the leather used on the cheekpiece and forend is the same as the upholstery. Other clever touches, such as the car tyre style quick fill cover and the ‘fuel gauge’ air pressure gauge really set this rifle apart from the norm. Only 70 of these exquisite rifles will be made and I’m sure that they will be snapped up by collectors; they will have to have a few bob to spare though, as the price is £2399.99. www.air-arms.co.uk

The Walther brand goes from strength to strength and I personally love my LGU Varmint Underlever. Tye and Graham were on hand to show me a selection of hydro dipped stocks that may be seen in the future. I particularly liked the black and white snakeskin effect on a Walther LGV, which is based on the extremely rare, and in fact imaginary, Arctic Cobra. www.armex-airgun.co.uk

I loved what I can only describe as an ‘Ultra’ Ultra being used on the range! It features a modified stock to allow really young shooters to get comfortable, without having to try and contort themselves when using a fullsized rifle. The pistol grip has been shortened front to back, so that the child’s hand is nearer the trigger. The rifles on the range were prototypes but it is destined to become the ‘Bantam JR-S’ fairly soon and should hopefully be under £400. Set at 6ft/lb (ideal for short range use and a high shot count) it will have a 10 shot rotary magazine and an air pressure gauge under the forend. It’s nice to see the name Bantam on a BSA product again, as the last Bantam motorbike rolled of the production line in 1971.

Simon Moore also showed me the new Gamo Varmint Stalker Maxxim break barrel rifle that has an IGT gas ram as its power plant. The Elite Wooden Hunter Stock features synthetic inserts in the forend and an adjustable cheekpiece. The Integrated Maxxim Whisper Silencer keeps things stealthy and the rifle comes with a Gamo 3-9 x 40 scope and mounts. All this for £219.99.

Mark Knibbs, from John Knibbs International, was also on the stand and we spent time talking about old airguns, especially early BSA springers and he had a nice collection of rare models, which was attracting a lot of attention. He even had an extremely rare VS2000 sidelever repeater from the 1980s; only 10 were made and they fetch serious money these days. He was kind enough to give me a copy of his father’s book on the history of BSA air rifles and it’s a very thorough and interesting read. www.bsaguns.co.uk, www.airgunspares.com

Tony Belas was very keen to show me Daystate’s new Field Target rifle that they have developed in partnership with Russia’s Ataman airgun company. The Tsar has a regulated action that produces 140 shots per charge, a Match Grade Walther barrel, a trigger with five levels of adjustment and a beautiful laminate stock that can be set up just how the owners requires. The adjustable forend can be re-positioned very easily, as can the buttpad and cheekpiece. This is a radical departure for Daystate but teaming up with Ataman has really paid off but this is much more than a simple bit of badge engineering, as there are many, many alterations that have been suggested by Daystate. Tsars will not have serial numbers, however, they’ll have Russian names; the one of the stand was Nickolai! This level of sophistication doesn’t come cheap of course and the price is £1900 but that’s pretty competitive compared to other company’s models.